SEPT. 05: A photo issued by U.K. police showing alleged GRU agent Alexander Petrov walking through airport security. Conspiracy theorists seized on the timestamp of the photo as evidence of discrepancies in the U.K.'s version of events.
Handout—Metropolitan Police via Getty Images
By Billy Perrigo/London

After the U.K. named two alleged Russian intelligence agents as the poisoners of Russian ex-double agent Sergei Skripal, Moscow initially shrugged its shoulders. The names of the agents identified by British authorities “do not mean anything to us,” the Foreign Ministry said according to the RIA news agency.

But when Prime Minister Theresa May claimed the attempted killings were almost certainly signed off “at a senior level” of the Russian state, diplomats began engaging in new attempts on social media to ridicule, discredit and sow doubt about Russia’s involvement in the attack.

In one tweet posted Thursday morning, the Russian Embassy in the U.K. contrasted a photo released by British police, of the two alleged GRU agents walking down a U.K. street, with one of investigators in HAZMAT suits. “Men ‘working with the most deadly military grade toxin of high purity,’” read the tweet. “How many differences can you spot?”

In another, a picture of May was placed next to former U.K. Prime Minister Tony Blair, who famously led the U.K. into the Iraq War with promises that state intelligence had revealed Saddam Hussein to have chemical weapons, only for that claim to be disproven.

The tweet appeared to quote Alexander Shulgin, Russia’s representative at the Organization for the Prohibition of Chemical Weapons, saying “I remember another story of a high-ranking UK official making accusations about [chemical weapons] and citing intelligence information as a proof.”

Yet another showed a picture of Colin Powell, the U.S. Secretary of State in 2003, holding up a vial he said could be used to contain anthrax, as part of a presentation to glean support in the run up to the Iraq war. Placed next to that picture was one released Wednesday by U.K. police, of a vial of perfume alleged to have been the vessel in which Novichok was smuggled into the U.K.

Even the Russian embassy in South Africa got in on the act, pointing out a discrepancy first noticed by conspiracy websites in which photos of the two alleged GRU agents walking through London’s Gatwick airport security gates appeared to have been taken at the exact same time.

“The so-called nefarious ‘Russian state operatives’ have apparently conquered time and space,” the caption read. This theory was debunked online, with users pointing out that there was more than one similar-looking gate at the airport, thus making it totally feasible that both operatives, boarding the same flight, would go through at almost identical times.

The Russian mission to the U.K. has long been an active Twitter user, sharing memes and other criticisms of British authorities. It also been implicated in attempts to influence the U.K.’s vote to leave the European Union in 2016.

Evidence passed to special counsel Robert Mueller’s investigation into election tampering shows the Russian ambassador to the U.K., met multiple times with Arron Banks, who donated £9m ($11.6m), the biggest donation in U.K. political history, to a campaign to leave the E.U., which was later found to have breached electoral spending laws.

Recently revealed documents also appear to show that associates of the Russian embassy also offered Banks special opportunities to invest in gold and diamond mines at special rates which were unavailable to the general public. Banks told the New York Times that he had been offered these deals, but that he did not pursue them. 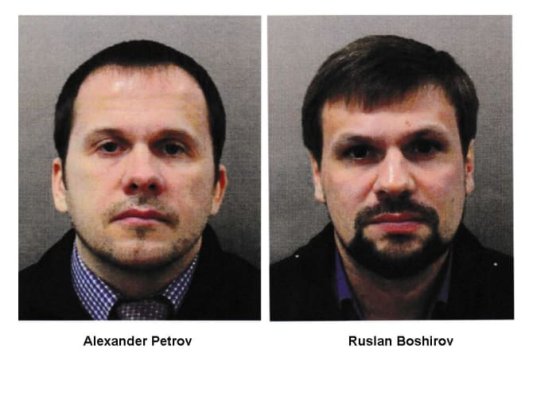