An anonymous “senior official in the Trump administration” is claiming to be part of a network of appointees and others who are working to thwart President Donald Trump from inside his own White House.

In a New York Times op-ed headlined “I Am Part of the Resistance Inside the Trump Administration” and published Wednesday, the unnamed author wrote that “many of the senior officials in his own administration are working diligently from within to frustrate parts of [Trump’s] agenda and his worst inclinations.”

The Times said it published the op-ed without the author’s name to protect the official’s job, while still allowing the message to get out.

Trump responded to the op-ed within an hour and a half of it being published during a White House event with local sheriffs – calling it “gutless” because it was published anonymously and saying it was “really a disgrace.” He also repeated a popular refrain of his about the “failing New York Times” and said the newspaper would be out of business if it weren’t for the news he generates as president.

A White House statement called the op-ed writer a “coward” who should resign.

In the op-ed, the staffer said senior officials considered trying to remove Trump under the 25th Amendment to the Constitution — which allows for a president’s removal if a majority of the Cabinet and the Vice President deem him or her unfit to serve — but decided against doing so.

“Given the instability many witnessed, there were early whispers within the cabinet of invoking the 25th Amendment, which would start a complex process for removing the President. But no one wanted to precipitate a constitutional crisis. So we will do what we can to steer the administration in the right direction until — one way or another — it’s over,” the staffer wrote.

The official dubbed the group of resistors the “steady state,” rather than the so-called “deep state” that Trump has repeatedly railed against.

“The erratic behavior would be more concerning if it weren’t for unsung heroes in and around the White House. Some of his aides have been cast as villains by the media. But in private, they have gone to great lengths to keep bad decisions contained to the West Wing, though they are clearly not always successful,” the official said.

As evidence, the official pointed to the Trump Administration’s “two-track presidency” with regards to its handling of issues like Russia, saying that the Administration has expelled Russian spies, worked to punish Moscow for election meddling and imposed sanctions at the same time as Trump himself has refused to clearly state that Russia was behind election interference.

The writer said many individuals in the Trump Administration are proud of “bright spots,” including deregulation, the tax cut bill and increased military spending. However, the official said, “these successes have come despite — not because of — the president��s leadership style, which is impetuous, adversarial, petty and ineffective.”

The op-ed comes as esteemed Watergate reporter Bob Woodward is coming out with a book that features compromising anecdotes from inside the Trump Administration. Woodward says he spoke at length with current and former White House officials to source the book, called Fear: Trump in the White House. Trump, however, has attacked Woodward’s reporting, and has previously called anonymous and unnamed sources “fake news.”

“When you see “anonymous source,” stop reading the story, it is fiction!” he tweeted on Aug. 29.

On Tuesday, he tweeted about Woodward’s book saying: “The already discredited Woodward book, so many lies and phony sources, has me calling Jeff Sessions ‘mentally retarded’ and ‘a dumb southerner.’ I said NEITHER, never used those terms on anyone, including Jeff, and being a southerner is a GREAT thing. He made this up to divide!”

In a statement Wednesday afternoon, White House Press Secretary Sarah Sanders said the author of the op-ed should resign: 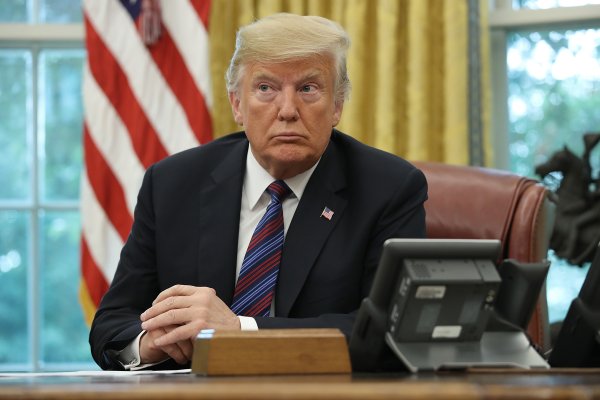 Trump Is Using His Anti-Mueller Playbook on Woodward
Next Up: Editor's Pick