'I Was Terrified': Inside a History-Making Protest With the Women Who Took on the Miss America Competition

Protesters denounce the swimsuit competition as a cattle auction on the boardwalk in Atlantic City, N.J., where the Miss America Pageant is taking place on Sep. 7, 1968.
Shutterstock
By Olivia B. Waxman

When the 2018 Miss America competition concludes on Sunday night, it will mark the first time in nearly a century that it has taken place without a swimsuit round. While those in today’s pageant world may disagree on the merits of the change, it’s been a long time coming.

It was 50 years ago when, on Sept. 7, 1968, a group of women bused down from New York City to Atlantic City, N.J., to protest Miss America. Dubbing the swimsuit competition a “cattle auction,” this “group of angry ladies” as TIME called them back then, took to the boardwalk.

But the demonstrators, organized by the group New York Radical Women, weren’t just calling for the end of the swimsuit competition, or even the abolition of the show in general. They had seized on Miss America as an example of a broader problem: the celebration of women who fit limited beauty standards and filled limited roles in society. The demonstrators had been active participants in the civil rights and antiwar movements; their 10-point manifesto also rebuked the pageant for supporting the Vietnam War, by sending Miss America protest winners to rally the troops, and for its lack of racial diversity, which led another group of activists to start a Miss Black America pageant that same year.

A half-century later, six women who were there spoke to TIME about what their protest did and didn’t accomplish — and what that means for future women’s rights activism.

On the Decision to Protest Miss America

Carol Hanisch, then 26 : At a New York Radical Women meeting in August, we were watching an art film, Schmeerguntz, that had clips of beauty pageant contestants. I’m an Iowa farm girl who grew up with a family that watched the Miss America pageant with great interest. The whole family would gather around the set and pick a favorite, so when I was a teen I thought these women were fantastic and beautiful and this is what I was supposed to be like. But even though we spent so much money and time trying, none of us ever felt good about how we looked, and we certainly weren’t comfortable in the clothes we had to wear — those scratchy bras, girdles that give you a stomachache, high heels that killed our feet and our back. As I watched [the film], it dawned on me that the Miss America pageant would be a really great way to get women’s liberation in the public consciousness.

Kathie Amatniek, known as “Sarachild,” then 25: There was an idea that women were already liberated, that we won the vote and that was it. The unequal pay, we were told, was because we weren’t qualified or weren’t interested in it. Well, when I was part of Freedom Summer in Mississippi, SNCC [the Student Nonviolent Coordinating Committee] taught us that the best thing that you can do for the movement is to raise white people’s consciousness about [how] they, too, are oppressed in the U.S., which is not as democratic as it claims to be in many ways. So I felt I was on assignment from the civil rights movement.

Robin Morgan, then 27: I had left the Yippie steering committee for the [protests] at the Chicago Democratic National Convention to organize this pageant protest and [the Yippies] thought I was crazy, that the revolution was going to begin in Chicago. I said, I’m going to organize Atlantic City instead, because the other was basically male-defined and women had no real voice in it. It was beginning to dawn on us that “the Left” was, in its own way, as sexist as the Right. And that was a crushing blow.

Alix Kates Shulman, then 36: To me, this particular demonstration was personal. I felt very strongly about the oppressiveness of beauty standards, having graduated high school in suburban Cleveland in the ’50s, when you all had to look alike, and that is what I fled. I moved to New York to go to graduate school and then got a really good job as an encyclopedia editor — but when I became pregnant, I had to leave my job. In 1967, I heard about New York Radical Women on alternative radio, and [the group] became the most important thing in my life. I was welcomed as a housewife mother, as a representative of the people that this revolution was supposed to be liberating.

On the Big Day

Morgan: More people showed up at [our meeting point] Union Square than we ever dreamed, so I had to go find a phone book to call more buses. Charlotte Curtis at the New York Times came with us on the bus, elegantly dressed. We decided to only invite female reporters. It wasn’t because we thought we’d get a better break; we weren’t that naïve. We wanted to give them a news story to cover because back then women were only assigned to flower shows, fashion shows or the society pages.

Bev Grant, then 26: I wrote some parody songs that we sang while we traveled down on the bus. One was of “Ain’t She Sweet”: Ain’t she sweet / Making profit off her meat / Beauty sells she’s told so she’s out plugging it / Ain’t she sweet… [Editor’s note: Grant also photographed the event; some of her work is seen here.]

Hanisch: I remember it was a gorgeous, bright and sunny day, and not too hot. We threw items representing women’s oppression and female torture into a Freedom Trash Can, like Playboy, Esquire, dishwashing detergent, floor wax, hair curlers, eyeliner, mascara, false eyelashes. We didn’t burn bras, that was a myth. We got a permit ahead of time and were told absolutely no burning. But we got gussied up in high heels to go into the convention hall, so no one would identify us with the picket line.

Shulman: I bought the tickets for the pageant so we could get the front row of the balcony to drop the banner “Women’s Liberation.” My husband and I had a joint checking account. It was his money really, and I didn’t ever use the money for my own purposes without discussing it with him, but for this I did. And I felt gleeful and proud. But he wasn’t against the protest. In fact, he drove a few of us in our car to Atlantic City. On the boardwalk, people behind the barricades called us [names like] dirty commie, Jew, queer, lesbian, ugly, whore, bitch. Delightfully, several of the women who came to watch did come over to our side of the barricade and marched with us.

Sarachild: At first I was terrified of getting arrested and not being able to go to my new job on Monday as an apprentice film editor. But civil rights activists took that risk for freedom, so that gave me the courage to volunteer to protest inside Atlantic City’s convention hall.

Peggy Dobbins, then 29: My husband worked in city planning and he made the puppet [of Miss America], and we probably got the springs for the boobs from his tool chest. The chains [around her waist] were very important, to show that women were being sold, that we were puppets of corporations like Toni Home Permanent. My mother used to hold my head down in the sink and pour the stinky fluid over my head, so that’s what I threw in the Freedom Trash Can and that’s what led to us going up and down the aisles [of the convention hall] squirting it under the seats of people sitting at the pageant, to show that selling Miss America stank. Some security guy grabbed me, like a bear hug from behind. And then the next thing I remember is watching the end of the Miss America pageant in jail. I was charged with disorderly conduct for emitting a “noxious odor.”

Morgan: Charlotte Curtis quietly bailed out the women who had been arrested inside the arena.

On the Impact of the Protest

Hanisch: If you didn’t grow up in that time, I’m sure it’s very hard to imagine that women were not complaining in public about their lot in life. I think that’s the reason the protest gleaned such attention. It was shocking that women were saying these things. I think we had an effect on the fashion industry. Women’s bras up to that point had been very, very uncomfortable, stiff and scratchy, and within a few years, we had soft bras that were much more comfortable. We’re the grandmothers of the #MeToo movement. We did it in person, and they do it mostly online. It’s taken 50 years [for Miss America] to drop the swimsuit competition, which was largely a cattle auction.

Sarachild: Even though we didn’t burn bras, the bra burning epithet got people’s attention. Women wrote to us from all over the country saying I’ve been waiting all my life for you.

Dobbins: Sometimes I’m kind of ashamed and feel terrible that we legitimated a world in which many women are single working mothers working 60 hours a week, working two or three jobs.

On Beauty Standards and Lessons for Today

Shulman: Heels are twice as high as the ones we tossed into the Freedom Trash Can. We objected to having to shave our legs, and now you have to shave pubic areas. So I can’t say those standards have disappeared at all. No, in some ways, it’s gotten much worse. That isn’t to say our movement didn’t have a tremendous effect. We did raise questions that can no longer be taken for granted.

Dobbins: I live in downtown Atlanta across the street from a major office building, and I didn’t expect to see women going to work in the morning in stiletto high heels. I want to say you don’t have to wear that, but apparently you do.

Hanisch: One thing that irritates me are the [exaggerated] reports out there that said 400 women came and protested. It was probably somewhere between 100 and 150 of us. It was only a small group of people that accomplished this, and I think it’s important for women to know that you don’t need a big group to make an impact.

Morgan: We used to have telephone trees, each call five people, and the phone bills were obscenely high. The Internet has made communication in general easier, but that also means it’s easier to spew venom.

Dobbins: I love social media. I’m nearly 80. I’m not very fit and can’t get out onto the street. But I also think that, if we had realized the degree to which we were different as strength and diversity, if we had applauded ourselves for that, we might have still all split up and started different things, but we wouldn’t have hurt each other so much.

Grant: It’s time for y’all to get it together. We are here and we can give advice, but you’re going to have to lead it. Maybe what we did at Miss America was a little over the top, but that’s how things move. Things don’t really move smoothly. There’s always this jerk one way, and a jerk back a little bit, and then you jerk forward and you jerk back. That’s just how change happens. 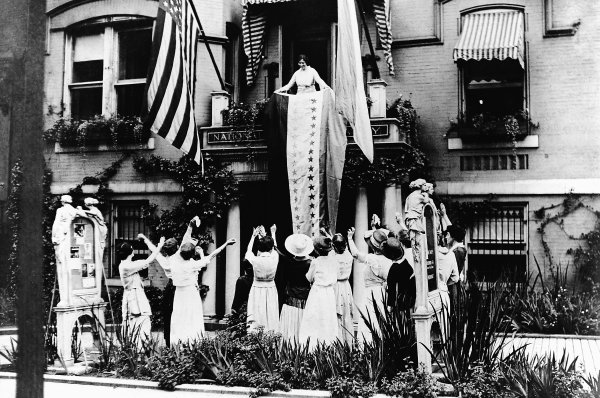 On Women's Equality Day, Here Are 3 Things to Know About the Suffrage Movement
Next Up: Editor's Pick