Judge Brett Kavanaugh declined to answer two questions from Democratic senators related to presidential investigations during his confirmation hearing — if a president should comply with a subpoena and if he has the ability to self-pardon — saying both were hypothetical.

“Can a sitting president be required to respond to a subpoena?” Democratic Sen. Dianne Feinstein asked during the second day of Kavanaugh’s confirmation hearings.

Citing the precedent dating back to the confirmation hearings of Supreme Court Justice Ruth Bader Ginsburg two and a half decades ago, Kavanaugh said he was unable provide give a response. “As a matter of the canons of judicial independence, I can’t give you an answer to that hypothetical question,” he responded.

Under the standard to which Kavanaugh was referring, known colloquially as the “Ginsburg standard,” a Supreme Court nominee can decline to comment on specific topics or cases that could potentially come before them as a judge. However, some legal experts have argued that subsequent nominees have expanded the concept to make it broader than Ginsburg’s initial application.

Kavanaugh had stressed his adherence to this principle at the beginning of the hearing, arguing the standard was key to preserving his judicial independence should he be confirmed, and reiterated those sentiments to Feinstein.

“My understanding is that you’re asking me to give my view on a potential hypothetical and thats something that each of the eight justices currently sitting in the supreme court when they were sitting in my seat declined to decide hypothetical cases,” Kavanaugh said.

Feinstein had asked the question in the context of US v. Nixon, the 1974 unanimous Supreme Court ruling ordering then-President Nixon to hand over tape recordings from his White House that ultimately led to his resignation. Kavanaugh said he was happy to discuss the precedent established in Nixon, which he called one of the greatest moments in Supreme Court history, but did not want to discuss potential situations.

Kavanaugh also used the same response when he declined to answer a question from Democratic Sen. Patrick Leahy of Vermont, who asked if he believed President Trump’s assessment that he has an “absolute right to pardon himself.”

“The question of self-pardons is something I’ve never analyzed. It’s a question I have not written about. It’s a question, therefore, that’s a hypothetical question that I cannot begin to answer in this context.” In practice, a president’s Constitutional power to pardon is quite broad, but legal experts indicate that a presidential self-pardon would violate a Nixon-era legal principle.

Earlier in the hearing, Kavanaugh had asserted the importance of judicial independence, stressing that it is a key value he strives for as a judge. When asked if he would harbor any loyalty to Trump since he nominated him, or if he would rule against him, Kavanaugh said his allegiance as a judge was to the constitution. “No one is above the law in our constitutional system,” he said.

His reticence on the specific subject of the subpoena, however, is significant given the legal cloud hanging over President Trump that is the special counsel investigation into Russian collusion in the 2016 election helmed by Robert Mueller. It is a distinct possibility that, if Kavanaugh were confirmed, he would encounter the exact situation Feinstein was asking about. The details of Mueller interviewing Trump are still reportedly being hashed out and the Washington Post reported on Tuesday that Mueller will accept written answers from Trump, but has not ruled out the possibility of an interview.

Trump attorney Jay Sekulow said last month that if Mueller were to subpoena Trump, his legal team would fight back in a battle that would end up in the Supreme Court.

“If that decision is made,” Sekulow added. “We’ll prepare to handle it in court.” 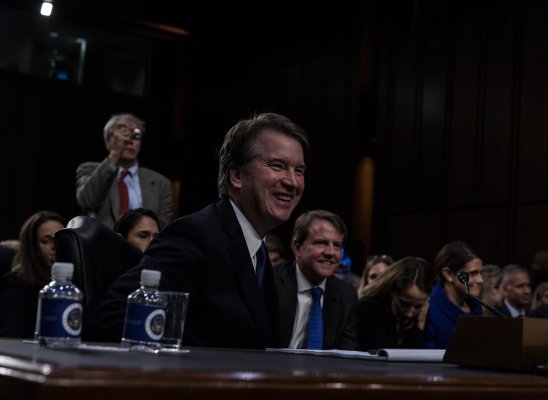 Democrats Put Kavanaugh's Time in the White House in the Spotlight
Next Up: Editor's Pick