Around 100 people on Emirates Flight 203 from Dubai complained of illness, with symptoms including cough and fever, before being officially evaluated, Benjamin Haynes, a spokesperson for the Centers for Disease Control and Prevention’s Infectious Disease Media Team, told TIME. Emirates, however, said that only about 10 of the roughly 500 passengers on the flight “were taken ill.”

Eric Phillips, press secretary for New York City Mayor Bill de Blasio’s office, tweeted about three hours after the plane landed that all passengers had disembarked. (Though Phillips initially said the plane was quarantined, Port Authority of New York and New Jersey did not escalate the incident to that level of formal response.) Ten sick people were initially taken to Jamaica Hospital Medical Center in Queens, while another nine were found to be ill but declined further medical treatment. One person on the plane sought treatment for unrelated symptoms later in the day, Jamaica Hospital representatives said in a statement Thursday.

A Jamaica Hospital spokesperson said in a statement provided to TIME that patients brought to the hospital had symptoms including cough, fever, sore throat and headache. Test results came back positive for influenza, Phillips tweeted Thursday morning.

Ten of the 11 patients were discharged by Thursday afternoon, according to Jamaica Hospital representatives, while the final patient remained at the hospital for flu treatment.

Vanilla Ice was apparently among the more than 500 passengers on the A380 aircraft. The rapper tweeted a video of the scene on the tarmac, and called the situation “crazy” in a separate tweet.

“So I just landed from Dubai and now there is like tons of ambulances and fire trucks and police all over the place,” he wrote. “Apparently there is over 100 people sick on the bottom floor, so happy I’m up top, it’s a double-decker plane 380,” he added in another tweet. 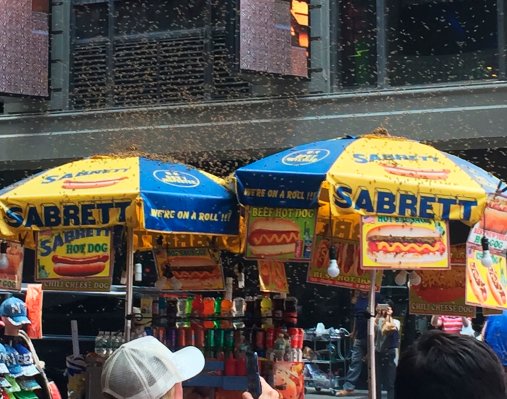 People Were Buzzing About the Swarm of 25,000 Bees That Descended on This Hot Dog Stand
Next Up: Editor's Pick