Janelle Cox walks the picket line at the state capitol on April 9, 2018 in Oklahoma City. Thousands of teachers and supporters were expected to rally at the state Capitol at that time.
J Pat Carter—Getty Images
By Jody Noll / History News Network

As summer break comes to an end, teachers across the country will flock to stores purchasing school supplies with their own money, turn their undecorated classrooms into places of excitement and learning, and prepare themselves for another year of testing, low pay and underfunding. However, following a year that witnessed numerous teachers’ strikes across the country for the first time in decades, teachers and school districts may also be preparing themselves for another wave of militancy.

This return to militancy to effect positive change in America’s schools has its roots in a concept that began during the 1960s known as Teacher Power. During the 1960s and 1970s the United States witnessed a rise of teacher activism and militancy that swept through the country. Buoyed by years underfunding for schools, low pay and societal views of teaching as an inferior profession, teachers across the country revolted against state and local school boards to demand improvements in education and to their profession. This movement coalesced around the concept of Teacher Power.

While other movements with similar monikers, such as the Black Power movement, have been well chronicled, the Teacher Power movement has remained a footnote in the story of American social movements. Teacher Power has largely remained dormant since the 1980s due to a national rise in anti-union beliefs and policies, and constant tension with educational reformers who place the blame of educational failings in the hands of teachers and their unions. However, the recent statewide strikes protests in West Virginia, Oklahoma, Kentucky and Arizona illustrate that Teacher Power has returned like wildfire, and this time these teachers might finish the job that their forebears started.

In a speech given in 1973 future American Federation of Teachers President Albert Shanker discussed the notion of Teacher Power arguing that it centered on the idea that, “teachers as an occupational group must be given responsibility for reshaping their school systems to the needs of the latter quarter of the 20th century,” and that Teacher Power was born out of the “deteriorating conditions in the schools.”

What Shanker made clear, and what opponents to the current teacher movements in states such as West Virginia, Oklahoma, Kentucky and Arizona fail to understand, is that Teacher Power focuses on much more than just pay. It is about improving education and finding professional respect and autonomy in a society where the creed, “those who can, do. Those who can’t, teach,” continues to pervade societal notions of the teaching profession.

This is most evident in Oklahoma, where teachers walked out even though the legislature approved a little over a $6,000 raise. They did so, believing the raise did not reflect their positions as highly qualified professionals, and more importantly because the legislature did not adequately address the severe issues of education funding spurred on by years of no new tax increases and budget cuts. These recent movements, however, did not rise spontaneously overnight, rather they have their roots in a long legacy of protests and strikes from teachers that have coalesced around the idea of Teacher Power.

Strikes over inadequate funding, historically, have been crucial to understanding the Teacher Power movement. Before Oklahoma, West Virginia, Kentucky and Arizona there was the 1968 statewide Florida teacher strike which, like the current strikes, occurred against a backdrop of conservatism. In 1968, Florida became the battleground for the first statewide teacher strike in the United States. Florida’s strike served as a forebear for the ascendancy of Teacher Power.

In February of 1968, over 27,000 teachers sent in letters of resignation to skirt the state’s anti-strike laws in an effort to challenge the authority of the state government’s influence over education. As in Oklahoma, Claude Kirk, Florida’s first Republican Governor since Reconstruction, offered teachers a token raise in the hopes of quelling dissent, failing to understand that the teachers demanded more than just higher pay. They wanted adequate funding for the schools as well as the power to shape their curriculum.

The legacy of the Florida teacher strike illustrates the potency of Teacher Power, as the strike forced the state to provide, amongst other concessions, all public sector employees with the right to collective bargaining (no small feat in the first state to mandate right-to-work laws), $10 million in extra funding for the remaining school year, and influenced the state’s decision to switch from the outdated Minimum Foundations Act to the more modern funding structure of Florida Education Finance Program.

However, Teacher Power is much more than about militancy and strikes. During the Florida strike, teachers across the state held rallies that often used comedians and musicians to make statements through their art on the state of education and the teaching profession. This cultural commentary has returned with acts such as the comedic styling of Eddie B, a teacher who through social media posts cultivated a following that helped create his Teachers Only Comedy Tour. Amid raucous and sold out crowds comprised almost exclusively of teachers, comedian Eddie B provides these professionals with the opportunity to let loose, but his stand up and social media videos also serve as a subversive critique of supervisors and politicians that value testing and statistics over the experience and knowledge of teachers who have dedicated their lives to educating the country’s youth.

Through the rise of teacher militancy and the popularity of cultural critiques of education, there can be no doubt that Teacher Power has returned, but this current movement is not a new one, rather it is the continuation of the unfulfilled revolution that occurred during the 1960s and 1970s. What teachers are demanding now, as they did then, is autonomy in their profession, pay reflective of their importance to the country, and governmental support through funding that will allow them to properly do their jobs. With the success found in West Virginia, and the strikes found in Kentucky and Oklahoma, and the talk of strikes in Arizona and throughout the country, maybe these teachers will be able to finally turn the dreams of Teacher Power into reality, if not, then the revolution will continue, not matter how long it lays dormant.

Jody Noll, a PhD Candidate in History at Georgia State University, is am writing his dissertation on the 1968 statewide Florida teacher strike 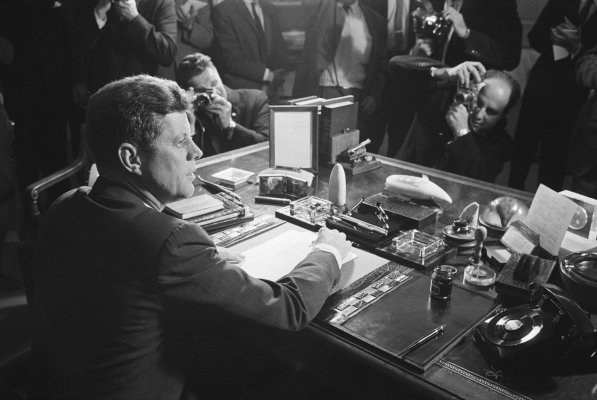 Diplomatic Back Channels Were Once Seen as a Good Thing. But They've Always Been Risky
Next Up: Editor's Pick