Brett Kavanaugh’s tenure in the George W. Bush Administration was front and center the first day of his confirmation hearings, which was just how Democrats wanted it.

Kavanaugh’s hearing began less than 24 hours after the Senate had received 42,000 pages of documents from Kavanaugh’s tenure, and three days after the White House asserted executive privilege and refused to release a hundred thousand documents. Those decisions were perfect fodder for Democrats, who have been pushing for a full release of these documents since President Donald Trump nominated Kavanaugh in July, to pounce.

As Senate Judiciary Chairman Chuck Grassley began reading his opening statement, he was interrupted by Democratic Sen. Kamala Harris, who asked him about the thousands of pages she’d received the night before. “We have not had an opportunity to review, or read or analyze,” she said. “We cannot possibly proceed.”

“You’re out of order,” Grassley told Harris. But Harris persisted in pushing for delaying the hearing to review the documents. As Grassley continued to try reading his opening statement, every other Democrat on the committee, with the exception of ranking member Dianne Feinstein, who stayed above the procedural fray, followed Harris’ lead, calling for the hearing to be adjourned because they lacked the necessary information to make a decision.

“What is the rush? What are we trying to hide by not having the documents out front? What are we hiding by not letting these documents come out?” Democratic Sen. Cory Booker asked Grassley.

The partisan infighting over the seemingly mundane topic of document release isn’t new; its been the primary focus for Senate Democrats, led by minority leader Chuck Schumer, for nearly two months. Kavanaugh served in the White House Counsel’s office during the Bush Administration subsequently served as staff secretary; his paper trail was always going to be longer than any of the other nominees the President was considering after Justice Anthony Kennedy resigned from his position in June.

Democrats said they wanted to see all of the documents from his time as White House staff secretary before the hearings, but Republicans did not request those documents, arguing they were irrelevant to his nomination. Although Senate Repulicans did ask for documents from Kavanaugh’s time in the White House counsel, the Democrats weren’t satisfied.

The tension was only exacerbated after the National Archives said it would be unable to release all of the documents that the Senate had requested from Kavanaugh’s time in the White House counsel before October. Senate Republicans, who want to confirm Kavanaugh before the Supreme Court starts its new term in October, have instead been relying on the documents to be released through the Bush presidential library after they were reviewed by attorney William Burck, a process Democrats have deemed too partisan.

Democrats still have an uphill battle to derail Kavanaugh’s nomination. Republicans need just 50 votes — their entire conference at the moment — to clear Kavanaugh’s nomination. The two Senators the Democrats had pinned their hopes on, Alaska’s Lisa Murkowski and Maine’s Susan Collins, don’t appear to have given any indication they won’t vote with their party. Additionally, several Democratic Senators are facing reelection battles in states where Trump won by double digits in 2016, meaning a vote against Kavanaugh could be potentially toxic for them. And on Tuesday, Arizona Gov. Doug Ducey announced he would appoint former Republican Sen. Jon Kyl to fill the late Sen. John McCain’s seat, giving Republicans even more of a cushion.

But on Tuesday, Democrats were finally given a chance to tell the public why they are so intent on reviewing certain documents.

“During your time in the White House, when you were staff secretary — some people regard it as kind of a monitor, monitoring things going in and going out. But I think it’s much more,” Feinstein told Kavanaugh in her opening statement. .”And you yourself have said that that’s the period of my greatest growth. And so we try to look at it. And the only way we can look at it is to understand the documents and it’s very, very difficult.” 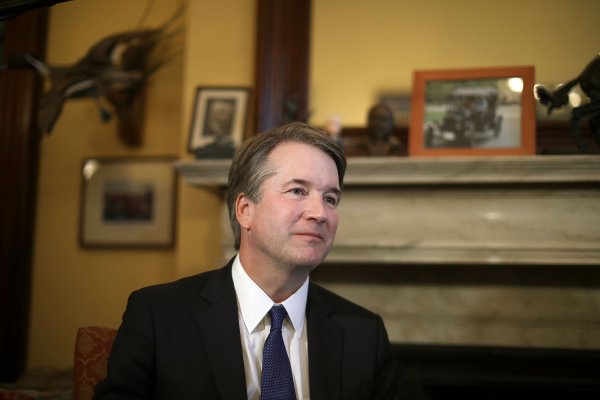 Poll: Kavanaugh Has Historically Low Support
Next Up: Editor's Pick