Martha McSally Is Running for Senate. Even If She Loses, She Might End Up There Anyway

Martha McSally is probably going to be a Senator, whether she wins in November or not.

Those are the signals coming out of Phoenix, where Gov. Doug Ducey on Tuesday announced former Sen. Jon Kyl will hold the Senate seat left vacant when John McCain died on Aug. 25 at age 81 after a brutal fight with brain cancer. Kyl, who is 76, has committed only to holding the seat through the end of this year, meaning Ducey may get a chance to appoint McSally to the role if she falls short in her election this November against Democratic rival Kyrsten Sinema.

In other words, it doesn’t really matter how McSally does this fall. She’s going to wind up moving her offices from the House to the Senate in short order. In fact, from a purely political perspective, she might actually benefit from losing; if Ducey, a Republican, puts her in the role in December, she’ll leapfrog an entire class of newly elected officials who won’t take office until January.

Arizona is among the states where Trump’s approval ratings are solid and durable, and McSally was hardly a Trump backer when he ran for President in 2016. She skipped the nominating convention and scolded Trump after a tape of him bragging about sexual assault was broadcast. McSally has tried to recast herself in Trump’s image, down to the profanity and anti-immigration rhetoric, but she faced a tough primary where 47% of Republican voters cast their ballots against her.

Kyl, by contrast, remains popular in Arizona. He retired in 2013 but has kept his hand in politics, working for a D.C. powerhouse law firm and lobbying operation. Currently, he is guiding Brett Kavanaugh’s nomination to the Supreme Court as a special White House adviser.

Those factors should allow him to dodge any Trump objection to the role, even though Kyl told reporters in Arizona he’s only met Trump once.

Kyl also remains close to the McCain family, which jumped the gun a bit by pre-empting Ducey’s announcement by offering praise. Ducey, too, could find his choice of Kyl a bit of a boost for his own re-election this November.

All of this should leave McSally feeling good despite the head-to-head looking tough. In the fall, she faces Sinema, a current colleague in the House who could make history by becoming the first bisexual woman elected to the Senate. Sinema has impressed national Democrats, who have choked down their objections to a voting record that has her siding with Trump about 60% of the time. Sinema is running a well-funded, few-error campaign that may be part of an election that could tilt the Senate into Democratic hands if absolutely everything goes as planned.

Arizona law requires Ducey to appoint a member of McCain’s party to the seat. The law also allows that appointment to carry through until the next election, which would be in 2020. But Kyl seemed to suggest he could step down at the end of the year, which opens the door for McSally, a former Kyl national security adviser, to slide right in.

Such a shrewd move fits what McConnell had hoped to see happen. McConnell and his allies wanted to have someone replace McCain who would instantly go into campaign move for 2020 and again in 2022, when that person would run for a fresh, six-year full term in the Senate.

Given that Trump is likely to be on the ballot in 2020, seeking his second term, it makes sense for McSally to continue to embrace Trump. If she is appointed this fall and has to run in 2020, there’s no point in angering the Trump supporters now to seek a potential edge against Sinema.

If McSally wins her race this year — and all polling suggests that is a very real possibility — that could allow Kyl to stay on, Ducey to appoint someone else who wants the seat in 2020 and 2022 — his chief of staff’s name is often mentioned — or perhaps recruit someone from the business world. McConnell advisers doubt Ducey himself would seek the seat in 2020.

One thing is certain, though: McSally has perhaps the beset safety net in politics at the moment. She simply cannot lose. 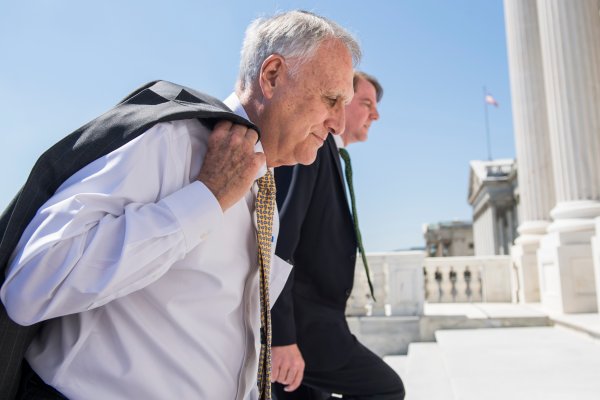