By this point, each side has clearly staked its claim. Colin Kaepernick is a pariah. Colin Kaepernick is a patriot. The former San Francisco 49ers quarterback has forever enraged millions of Americans by starting a protest movement against social injustice during the National Anthem. He’s inspired millions of others by challenging the country to live up to the ideals that the flag is supposed to represent. Don’t bother trying to convert hearts and minds. Because everyone’s already entrenched.

At the same time, Kaepernick has secured some pretty big wins lately, none bigger than his endorsement deal with Nike that was unveiled on Monday afternoon, Labor Day. Kaepernick has achieved a dream to which many athletes aspire — to headline one of Nike’s iconic “Just Do It” ad campaigns. And the ex-NFL quarterback did it without throwing a single pass in nearly two years.

The NFL season kicks off on Thursday. Once again, Kaepernick couldn’t loom larger.

Kaepernick’s been a Nike client since 2011. According to a person familiar with Kaepernick’s agreement with Nike, a new multi-year contract will include Kaepernick-branded shoes and apparel. Nike will also contribute to Kaepernick’s Know Your Rights charity. The campaign includes a giant Kapernick billboard in San Francisco’s Union Square. Other Nike athletes featured in the 30th anniversary “Just Do It” campaign include Serena Williams, LeBron James, New York Giants wide receiver Odell Beckham Jr., and Seattle Seahawks rookie linebacker Shaquem Griffin, who lost his left hand when he was a child.

The announcement of Kapernick’s Nike campaign comes a few days after he achieved an important legal victory. An arbitrator overseeing Kaepernick’s labor complaint against the NFL agreed to grant Kaepernick a trial-like hearing due to the strength of evidence he presented that team owners colluded to exclude him from the league. Kaepernick contends that NFL owners have effectively blackballed him because he started kneeling during the national anthem. A day after that legal win, Kaepernick and former teammate Eric Reid, who has also filed a collusion complaint against the NFL — Reid had protested racial injustice with Kaepernick and also remains unsigned — received standing ovations at the U.S. Open in New York City when their images were shown on the video board.

While it’s no shock that a liberal-leaning city like New York would welcome Kaepernick, such a vocal show of public support leant importance credence to his protest, which has already won Kaepernick a slew of accolades. Last December, the ACLU honored Kaepernick with the Eason Monroe Courageous Advocate Award; in November, he received the Muhammad Ali Legacy Award from Sports Illustrated. In January, he completed his pledge to donate $1 million to charities serving disadvantaged communities. In April, Amnesty International gave Kaepernick its highest honor, the Ambassador of Conscience Award.

If Kaeperick were still just the 17th-ranked NFL quarterback — like he was in 2016, his last season in the league — who hadn’t spoken out, he might still have an NFL job. But it’s hard to imagine him fronting a Nike campaign, receiving international honors, and being greeted like a hero at an international sporting event. It’s hard to fathom Kaepernick exerting such influence.

Sure, Nike’s Kaepernick campaign could hurt the company. Predictable outrage followed the announcement. Some customers burned their Nike gear; others pledged boycotts. As of Tuesday evening, President Donald Trump hadn’t lashed out on Twitter about Nike’s decision to feature Kaepernick, though he called it a “terrible message” in an interview with the Daily Caller. Nike shares slipped 3% on Tuesday, but the stock is still up 27% this year. Eric Tracy, an equity analyst for the Buckingham Research Group, wrote in a note published Tuesday that “we do not believe there will be a meaningful negative impact” for Nike due to the Kaepernick ads. “We believe the campaign aligns to Nike’s brand DNA,” Tracy writes. “We believe Nike is most focused on driving business with the younger, millenial, urban demographic … who broadly support the stand and want to connect with and support athletes (not NFL owners).” Two of the most popular athletes on Nike’s roster, James and Williams, supported Kaepernick’s ad on social media.

Kaepernick’s fate is not tied to Nike’s. Even if the company’s sales slump, Kaepernick could make millions from the endorsement deal. Nike is featuring an athlete who is effectively suing a league with which it recently extended an official apparel partnership through 2028. Nike has picked both sides. Kaepernick doesn’t need the NFL to make a very fine living. 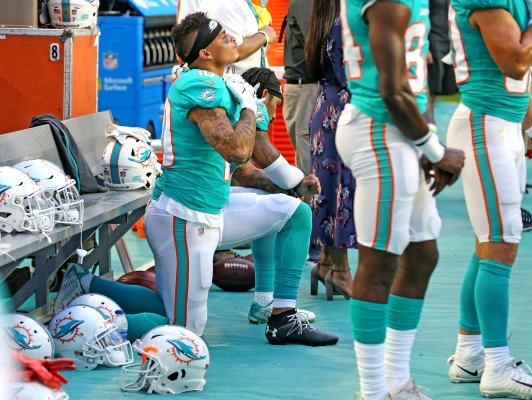