For reasons that defy all logic, it was long a rule that video games based on superheroes were almost definitely bad. There were certainly exceptions — 2002’s Spider-Man comes to mind — but there was also Superman 64. And Catwoman. And Iron Man 2. And so on. Thankfully, more recent games, like the excellent Batman Arkham series, have begun to undo that rule. And Marvel’s Spider-Man, out Sept. 7 for PlayStation 4 and developed by Insomniac Games, is here to hopefully end it for good.

Like the latest Marvel movies, Marvel’s Spider-Man wisely presents a Peter Parker who’s at least a few years removed from the death of his beloved Uncle Ben, sparing players from yet another retelling of an origin story we all know. He’s already confident in his abilities, and he’s already faced some of his classic foes. But unlike the Avengers movies, the game’s Parker is a little older and a little more mature. The storyline follows suit, grappling with issues like police overreach, fascism and mental illness. It’s the strongest part of the game, and will keep me coming back until I finish it. (For transparency’s sake, I’m about 65% of the way through at review time.)

The minute-to-minute gameplay here is, at first glance, nothing groundbreaking for a superhero game. It’s a lot of button-smashing, combo-nailing combat against increasingly numerous and complex henchmen, with the occasional boss battle centered around finding and exploiting some weakness in your enemy’s approach or using the environment against them. But as you gain new abilities and commit various combos to memory, you’ll find yourself starting to think like Spider-Man, dodging and ducking and zipping around a dozen baddies as you ever more creatively dispatch your foes with combinations of kicks, webs and gadgets. The first time you use Spidey’s webs to send a rocket hurling back towards the jerk who shot it at you, sending them flying, you can’t help but smile. And the next time. And the time after that.

Even still, the combat can sometimes feel rote. But that’s mitigated by the strong story, in which New York faces a new and deadly threat that rises in the power vacuum created during the opening act. Whenever I felt myself getting a little bored of fighting, something happened to move the story along, and I’d want to keep playing to get to the next cutscene. That the entire mood of the city changes as the story develops is a cinematic and clever bit of design work, too. New York itself feels great, modeled accurately enough but slightly more comic-feeling than in say, The Division. (Though I’m pretty sure I spotted the Staten Island Ferry sailing under the Brooklyn Bridge, so minus half a point there.)

You may have mixed feelings about a handful of missions that put you in control of characters other than the web-slinger from Queens. While at first I found them frustrating — I’m never very good at stealth challenges — they were a smart way for Insomniac to elevate a wider diversity of characters. Also somewhat annoying is the sheer number of early-game side missions that are skippable but, if you don’t do them, you might wind up like me, getting pestered to chase a rogue messenger pigeon while New York is literally burning around you and Spidey probably has more important things to do. Still, the side missions give you credits you can use towards upgrades like a full closet’s worth of new and fun suits, all with their own abilities. (The punk-rock Spider-Man who dispatches enemies with the power of a guitar riff is a personal favorite.)

All that said, there’s a wonderful magic to zipping around what feels like a full-size New York, beating up muggers, possessed hitmen and fascist paramilitary forces. The easy-to-master controls, gorgeous graphics and sound design and excellent writing and acting combine to create a game that’s one of the most fun I’ve played in years. It works for exactly the same reasons the Marvel movies do — they’re great summer popcorn flicks, and sometimes a little more. Spider-Man fans in particular will love this one, as it’s the best Spidey simulation to date, bringing the spirit of the PlayStation 2 classic into the modern gaming world. Hopefully for comics fans, Marvel’s Spider-Man is a sign that we can finally put to bed that silly rule about superhero games once and for all. 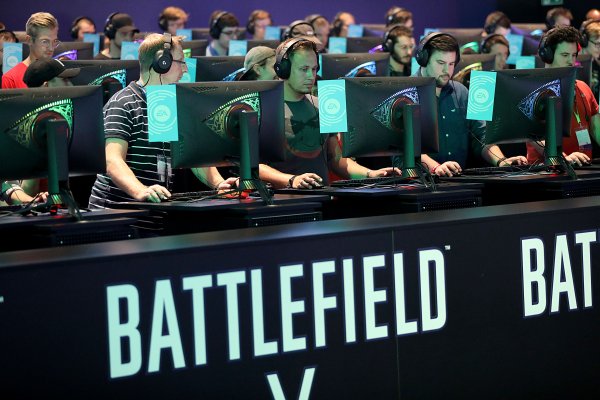 'Battlefield V' Is Being Delayed and Electronic Arts' Stock Is Plummeting
Next Up: Editor's Pick