An 'Insurmountable' Loss: Here's What to Know About Brazil's National Museum Fire

One of Latin America’s most important museums was gutted by a fire Sunday night in a disaster that may have destroyed more than 20 million scientific and historical artifacts.

It remains unclear how many of the irreplaceable treasures housed at the National Museum of Rio de Janeiro were lost in the blaze, but authorities expect a catastrophic blow has been dealt to Brazil’s cultural nucleus. One museum director estimates as much as 90% of the inventory may have been razed.

The timing of the fire couldn’t have been worse. As firefighters battled the flames — reportedly using lake water because the nearest fire hydrants failed — museum officials revealed that the underfunded institution had been slated for a $5 million upgrade, including to its fire prevention system.

As investigators continue searching for clues as to what may have started the blaze, here’s what to know.

By Monday morning, museum directors began to survey the damage. Underneath the rubble of lumber, shingles and metal beams, they hope to find any of the natural history museum’s relics.

Most of what was lost was contained within the 200-year-old Imperial Palace. Once home to the Portuguese royal family, this main building housed an extensive collection of paleontological, anthropological and biological specimens, according to the Associated Press.

Inside the palace was a 12,000-year-old skull called Luzia that was believed to be among the oldest fossils ever found in the Americas. The wing also held an Egyptian mummy, and displayed the largest meteorite ever discovered in Brazil — one of the few artifacts that officials could confirm had survived.

Luiz Fernando Dias Duarte, the museum’s deputy director, told AP that anything held in this main building was likely gone.

“The loss of the National Museum’s collection is insurmountable for Brazil,” President Michel Temer tweeted on Sunday.

How has the public reacted?

Not long after the plumes of smoke rose into Brazil’s night sky, people rushed to the scene reportedly to witness and protest the loss. On Monday morning, police fired tear gas and pepper spray into the angry crowd to stop them from entering the premises while the embers were still smoldering, Al Jazeera reported.

For some Brazilians, the charred remains of the 200-year-old museum symbolize not only a heartbreaking disaster, but also the larger griefs of a country gutted by a recession and tarnished by corruption and mismanagement. More than 12 million people have been left unemployed, while spending on culture and education has suffered.

Bernardo Mello Franco, a columnist for O Globo, one of Brazil’s major newspapers, wrote “The tragedy this Sunday is a sort of national suicide. A crime against our past and future generations,” according to the Guardian’s translation.

What state was the museum in before the fire?

The stately museum had reportedly fallen into disrepair amid the country’s struggles.

Roberto Leher, rector of the Federal University of Rio de Janeiro, told reporters Monday that it was well known that the dilapidated museum required extensive renovations. Funds were so sparse at one point that the staff resorted to crowdfunding.

But change appeared to be on the horizon. In June, a project to improve the fire system was approved, and the funds were expected in October, Leher said, according to CNN.

Investigators are still trying to determine what set off the fire around 7:30 pm local time, when the museum was already closed to the public.

People watch as a massive fire engulfs the National Museum in Rio de Janeiro in Brazil on Sept. 2, 2018.
STR—AFP/Getty Images

And while there are already calls to rebuild the museum, many have pointed out that the loss of the collected history can never be restored.

Luiz Philippe de Orleans e Braganca, an heir to Brazil’s last emperor, told AP, “The building could be rebuilt, but the collection will never again be rebuilt. Two hundred years, workers, researchers, professors that dedicated in body and soul (to the museum) … the work of their life burned due to the negligence of the Brazilian state.” 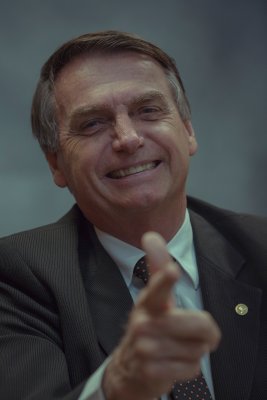 Jair Bolsonaro Loves Trump, Hates Gay People and Admires Autocrats. He Could Be Brazil's Next President
Next Up: Editor's Pick