Classicist Mary Beard on Feminism, Online Trolls and What Ancient Rome Can Tell Us About Trump

Mary Beard is reclining at such a steep angle that her toes hang several feet above her head. Typing leisurely on her laptop, the Cambridge University historian is polishing off a paragraph of her next book on Ancient Rome. It’ll be one more to add to the hundreds of hefty volumes on classics that jostle for space with mock-Greek busts on the walls of her light-filled home office. When she finally swings back into a more conventional relationship with gravity, she tells TIME that her devotion to the ancient world doesn’t mean she’s out of touch. “I wouldn’t work on Rome if I didn’t think it had something to do with the present. Why would you spend your life buried in the past?”

Over the last decade, Beard’s ability to seamlessly weave her knowledge of Ancient Rome and Greece into lessons on modern politics, culture and society has turned her into the world’s most famous classicist. She has written 18 books and hosted nine TV shows. Along the way, she’s gained a reputation for upending assumptions: that academics are boring and serious; that women on TV should be petite, blonde and under 35; and that public figures should ignore their online trolls.

Though she has been working in academia ever since graduating from the University of Cambridge, U.K., herself in the mid-1970s and became Classics editor at the prestigious Times Literary Supplement in 1992, Beard didn’t become a household name until 2012. She had appeared in a few television programs when British art critic A.A. Gill criticized her for being too unattractive to appear on the nation’s screens. Beard penned a response in conservative British tabloid the Daily Mail and received an outpouring of positive support. “I had thousands of middle-aged women, most of whom wouldn’t agree with me on other things, saying ‘that’s what I look like.’” It was heartwarming,” she says. A feminist icon was born.

Since then, she has grown ever more popular, developing a loyal Twitter following, appearing in a string of successful history shows, including the BBC’s 2018 documentary series Civilisations and its PBS version, and publishing two New York Times bestsellers, SPQR and Women & Power: A Manifesto. In June, Queen Elizabeth II made her a Dame of the Order of the British Empire, an honor bestowed on Brits who make the greatest contributions to public life.

In Beard’s new book, How Do We Look: The Body, the Divine, and the Question of Civilization, a companion to Civilisations, she turns her typically provocative perspective to art history. She argues that popular culture today has “an exclusive, almost obsessive focus” on the artists behind the art, at the expense of understanding how art forms a part of society. “Art becomes meaningful and classics become masterpieces because of the people who judge them, look at them, write about them.” Beard says. “If you leave those people out of the story you get a very skewed view of what art is.”

By changing the focus of art history, Beard aims to tackle a problem at the heart of our modern understanding of ancient societies. “Because there are so few female artists and writers in the ancient world, we tend to think of antiquity as something you can only see through a male perspective,” she says. Beard searches out evidence of women’s reactions to art—for example, a Syrian noblewoman’s poem engraved at the foot of an ancient Egyptian statue—to remind the reader that women had a stake in the ancient world too, even if they weren’t often allowed to contribute to the cultural canon themselves.

The book’s aim of widening the range of perspectives we have on the ancient world is one it shares with the television show she co-presented this year. It is a reimagining (rather than a remake) of Kenneth Clark’s groundbreaking 1969 BBC documentary Civilisation—a series that inspired Beard, as a young girl, to study art. But, she says, while it was “great for its time,” it limits the scope of its singular “civilisation” to Western Europe.“And there are almost no women in it except the Virgin Mary and a few hostesses and courtesans.”

In the new version, which aired on PBS this summer after its original outing on the BBC earlier this year, Beard and her fellow presenters take viewers on a journey across 31 countries, from Greece, to Mexico, to South Africa to India. “You can say it’s a trick to put an ‘s’ on the end of ‘civilisation,’ and of course it is,” Beard says. “It doesn’t solve any problems. But it opens up the idea of my civilization being your barbarity, and it starts to raise plenty of difficult questions.”

Beard has never shied away from difficult questions. In November 2017, just as the Harvey Weinstein scandal was breaking and Me Too movement began to gain momentum, Beard published Women & Power, asking why society has a problem with female voices and female authority. In fewer than 100 pages, a combination of two previous lectures, Beard charts the history of how women have been silenced since antiquity. She traces the first episode of a woman being made to shut up to Homer’s Odyssey, when Odysseus’ young son Telemachus tells his mother Penelope, “Go back up into your quarters, and take up your own work, […] speech will be the business of men.”

Coming after notable moments like Mitch McConnell’s silencing of Elizabeth Warren in the Senate in February 2017 and Donald Trump’s mocking of Hillary Clinton’s debate bathroom break in 2015, many saw Beard’s manifesto as a timely reminder that women still have to fight especially hard to have their voices heard in the corridors of power. “If you look at the history of how we’ve inherited views about women’s proper place—the forms and the language with which women have been talked about for millennia,” Beard says, “you see the same patterns repeating. To the extent that in 2016 Hillary Clinton was still being portrayed as Medusa being decapitated on coffee cups and T-shirts.”

Beard believes identifying these patterns is the first step to stamping them out. “If it’s something learned through culture, it’s not a natural hatred. If you can learn something, you can unlearn it,’ she says.

As a woman who regularly wades into thorny public debates, Beard has had to contend with more than her fair share of people who would rather she stopped talking. She tweets non-stop, using the platform to escape academic work “in the same way I used to have cigarette breaks” and has become known for her regular takedowns of trolls, batting away expletive-laden insults with cool-headed ripostes. “I go with what you might call aggressive politeness,” she says. “‘It really would be better if you took that down.’ The moral is you never, ever lose your temper with them.”

Beard acknowledges the nastiness of some of her trolls, but says many “are sad, lonely, desperate.”

“What’s driving them is a feeling of alienation really,” she says. “I think it’s interesting that male frustration converts into misogyny. But when you reply to them, it shocks them because they realize there’s a person on the other end.” She has famously befriended some of her trolls, going out to lunch with one and even writing him references for job applications.

The only form of Twitter interaction Beard can’t stand, she says, is when her followers tell her they are “disappointed” in her after she shares a controversial argument or opinion. “I always think, you patronizing dick! You’re acting like there’s a moral failing here, but what you mean is ‘normally I agree with Mary Beard and on this occasion I don’t.’ Just say that. We don’t want to live in a world where everyone agrees with each other!”

The deepening political divide in the U.S. and an apparent realignment of the world order through President Trump’s foreign policy have prompted many comparisons to the fall of the Roman Empire. But Beard is unconvinced. “There aren’t these one-to-one correlations that people want,” she says. “I can’t think of any emperor that Donald Trump is like and the circumstances of the fall of the Roman Empire are still utterly opaque to us.”

More than clear-cut historical comparisons, Beard says, the ancient world allows us to see beyond our own context to analyze what a “regime of autocracy” looks like. “For example, it tells us about the importance of a populist politician being able to speak directly with the public, without the mediation of the rest of the government class,” she says “That’s what Caesar was doing when he famously said ‘Veni, vidi, vici.’ [I came, I saw, I conquered.] We recognize that directly in Trump’s tweets.”

But, she adds, the Romans themselves would want their lasting lesson to be that empires do fall. “We think of them as being very jingoistic, very over-confident. But actually they knew that what goes up always comes down,” she says, adding, with a laugh, “Roman historians would apply that very gleefully to today: we told you so!”

It’s a lesson she applies to her own popularity. “It’ll pass. It’ll pass,” Beard says when asked how it feels to be called an inspiration. She adds that she doesn’t think she’s better at handling trolling or overcoming millennia of culturally-embedded misogyny. “You just start to care less when you’re old,” she says with a laugh. “It’s a great pleasure that I can show younger women that you can stand up to these guys. You can call them out. And life goes on.” 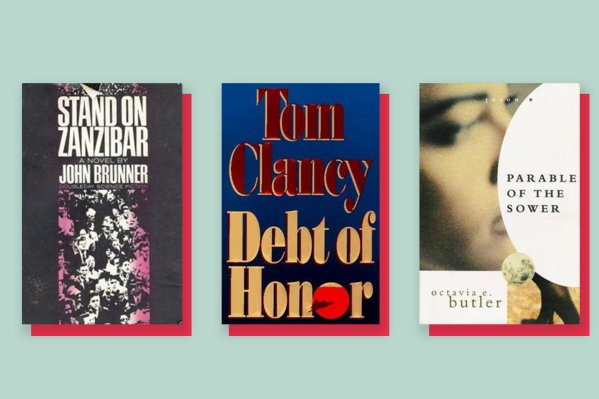 8 Books That Eerily Predicted the Future
Next Up: Editor's Pick