Two women were publicly caned by a Malaysian Shariah court on Monday for allegedly having sex, a punishment that drew international rebuke as both cruel and indicative of growing concerns about LGBT discrimination in the country.

The two unnamed women, ages 22 and 32, were arrested in April after Islamic enforcement officers spotted them in a car together in northeast Terengganu state, according to Agence France-Presse. Earlier this month, they pleaded guilty to charges of lesbian sex, and were sentenced to six strokes and a RM 3,300 (U.S.$800) fine in a verdict the judge called a lesson for society.

After a week-long delay due to “technical difficulties,” the whippings reportedly occurred Monday in front of over 100 onlookers at the Sharia High Court in the state capital.

Amnesty International called the sentence “a dreadful reminder of the depth of discrimination #LGBTI people face in the country and a sign that the new government condones the use of inhuman and degrading punishments, much like its predecessor.”

Other groups condemned the punishment as torture.

The case has not only prompted outrage among rights organizations, it has also cast a spotlight on what activists say is an increasing climate of hostility and discrimination against the LGBT community in Malaysia.

Last month, a transgender woman was reportedly beaten up in a southern state. Just a week earlier, Malaysia’s religious affairs minister ordered the removal of portraits of LGBT activists from an arts festival in Penang, telling reporters, “We do not support the promotion of LGBT culture in Malaysia.”

In Muslim-majority Malaysia, Islamic courts handle the religious and family matters of Muslim citizens. In all 13 states and federal territories, the Islamic courts outlaw same-sex sexual relations. In Terengganu, where the women were caned, liwat (sodomy) and musahaqah (sex between women) is punishable with up to three years in prison, fines and a maximum of six cane strokes.

The same-sex laws are rarely enforced, however. According to Human Rights Watch, the federal anti-sodomy law has been applied just seven times since 1938, and four of those were against former opposition politician Anwar Ibrahim in what were widely seen as spurious charges.

Campaigners told AFP that Monday’s caning was the first time two women have been punished for same-sex relations. 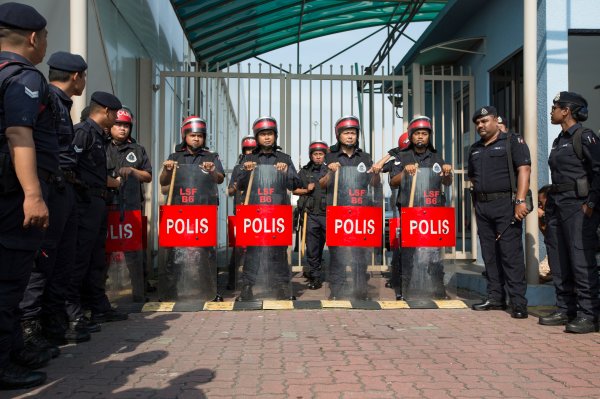 Malaysia Steps Up Search to Find Missing Radioactive Device
Next Up: Editor's Pick