John McCain Called on Us to Be Bigger Than the Politics of Fear, Obama Says at Senator's Funeral

Former President Barack Obama affectionately recalled the many disagreements he had with John McCain – both as a candidate in 2008 and later in the White House – at the Arizona Senator’s funeral Saturday, but said McCain never forgot that they were both, ultimately, on the same side as Americans.

Obama said McCain’s life and career in Washington should remind the nation to reject politics of fear and divisiveness and remember that all Americans are still on the same side.

“So much of our politics, our public life, our public discourse can seem small and mean and petty, trafficking in bombast and insult and phony controversies and manufactured outrage,” Obama said. “It’s a politics that pretends to be brave and tough but in fact is born of fear.

The words will likely be seen as a subtle reference to President Donald Trump, who was not invited to the funeral.

Obama, though a Democrat who defeated McCain in his 2008 presidential bid, spoke triumphantly of the sacrifices McCain made for his country, both as a naval aviator and a former Prisoner of War, and as a U.S. senator and Republican presidential nominee.

“A warrior, a statesman, a patriot who embodied so much that is best in America. President Bush and I are among the fortunate few who competed against John at the highest levels of politics. He made us better presidents. Just as he made the Senate better,” Obama said.

The former president spoke fondly of his former rival. He said the two eventually found common ground, despite surface differences.

“John and I couldn’t have been more different. We’re of different generations. I came from a broken home and never knew my father. John was the son of one of America’s most distinguished military families.

“I have a reputation for keeping cool. John, not so much. For all our differences, I never tried to hide the long-standing admiration I had for him.”

Obama said McCain was never afraid to stand up for what he believed in.

“We were standard bearers of different political traditions, and throughout my presidency, John never hesitated to tell me when he thought I was screwing up, which by his calculation was about once a day,” he quipped.

He also spoke of the widely shared moment during the 2008 campaign when McCain corrected a woman who questioned Obama’s citizenship. He said it was McCain’s instinct to stand up for his fellow man.

“I never saw John treat anyone differently because of their race, religion and gender and I’m certain in those moments referred to in the campaign, he saw himself defending America’s character, not just mine.”

Obama said that McCain’s choice of eulogizers showed his sense of humor and ability to reach across the aisle.

“What better way to get a last laugh than to make George and I say nice things about him to a national audience?” the former president joked.

Obama called McCain a patriot who put country over politics.

“He did understand that some principles transcend politics, that some values transcend party,” Obama said. “We never doubted we were on the same team.”

Read the full transcript of Obama’s eulogy of John McCain: 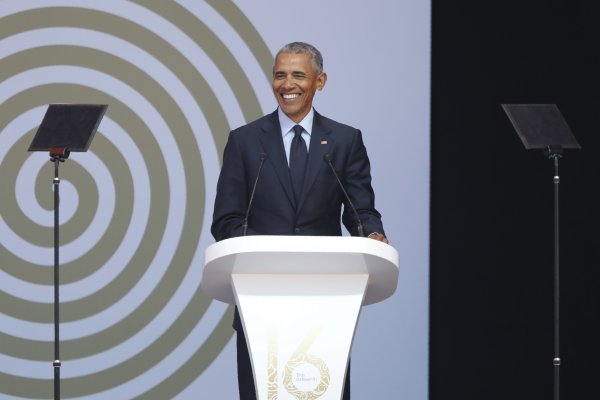 Former President Obama Turned 57 on August 4
Next Up: Editor's Pick