Meghan McCain delivered a tearful and deeply personal eulogy for Sen. John McCain at his funeral Saturday morning – paying tribute to his devotion and tenderness as a father and family man. Her speech also included a defiant rebuke of President Donald Trump, though she never mentioned him by name.

“We gather here to mourn the passing of American greatness,” she said. “The real thing, not cheap rhetoric from men who will never come near the sacrifice he gave so willingly.”

In an apparent reference to Trump’s “Make America Great Again” campaign slogan, Meghan added: “The America of John McCain has no need to be made great again because America was always great.” The line was met with applause.

Meghan, a host on ABC’s The View, has been a vocal supporter and defender of her father – including taking on President Donald Trump’s repeated attacks on McCain.

Most of Meghan’s speech paid tribute to the John McCain few had the privilege to see, his private life with his family.

In his suite at the Crown Plaza Hotel, Republican Presidential contender Senator John McCain hugs his daughter Meghan McCain, with his wife Cindy McCain behind them, on Jan. 8, 2008 in Nashua, N.H.
David Hume Kennerly—Getty Images

“My father was a great man, a great warrior, a great American and I admired him for all of these thing, but I loved him because he was a great father,” she said.

Meghan shared personal anecdotes, including about the time she fell off a horse and broke her collarbone. She said her father – who spent more than five years enduring beatings and torture as a Prisoner of War in Vietnam – told her to be strong and reminded her, “Nothing is going to break you.”

It is advice she said she carries with her to this day.

Meghan spoke of her father’s sacrifices during the Vietnam War, but said his most important role was father.

She spoke of the pain he had to endure before becoming a legislator and remarked that those memories never faded.

“My father knew pain and suffering with an intimacy and immediacy most of us are blessed never to have endured,” she said. “He was shot down, he was crippled, he was beaten, starved, tortured and humiliated. That pain never left him.”

Friends, family and colleagues gathered at the Washington National Cathedral on Saturday to honor the life of the Arizona Republican, who died last Saturday at 81 after a battle with brain cancer.

Trump was notably absent, at McCain’s request. Trump left the White House for his golf club in Virginia and tweeted about NAFTA negotiations during the funeral service.

John McCain served as a Republican Senator in Arizona for 31 years. He was a naval aviator in the United States Navy and was famously captured during the Vietnam War and was held captive for five years in Hanoi.

He will be laid to rest Sunday at the US Naval Academy Cemetery following a private ceremony.

Read the full transcript of Meghan McCain’s eulogy of her father: 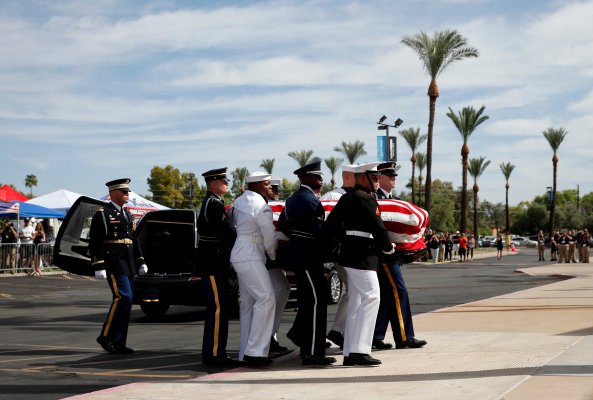 'We Shall Not See His Like Again'
Next Up: Editor's Pick