A Trump campaign volunteer blocks a camera as a photojournalist attempts to take a photo of a protester during a campaign rally at the Ford Center, in Evansville, Ind, August 30, 2018.
Evan Vucci—AP/Shutterstock
By Gina Martinez

The image of a Trump campaign volunteer blocking the lens of a news photographer’s camera at a rally Thursday went viral overnight.

Even by the standards of a rally by President Donald Trump – who frequently points out journalists covering his events and calls them “enemy of the people” and “fake news” – this was out of the ordinary, says the photographer who captured the moment in Evansville, Indiana.

“We’re all just trying to do our job, which is to be fair and accurately document the President. When someone impedes you from doing your job, that’s something to be upset about,” Associated Press photographer Evan Vucci tells TIME.

Vucci says he made the picture as a fellow photojournalist Kevin Lamarque of Reuters tried to photograph Trump supporters pointing out a protestor in the crowd. In a flash, a campaign volunteer put his hand in front of Lamarque’s lens to stop him. Lamarque managed to get a shot anyway – plus a photo of the hand blocking his lens.

Lamarque tells TIME that the volunteer was Nick Barbknecht, who was assigned to help journalists covering the event.

Barbknecht, who did not respond to requests for comment, is well known in Indiana Republican circles, says Indiana attorney and political commentator Joshua Claybourne. Claybourne tells TIME that Barbknecht is a seasoned political operator in the state who is married to a staffer for Vice President Mike Pence.

A biography for political consultant Majority Strategies says Barbknecht joined the firm from “the blocking and tackling of Republican politics in Indiana where he served on the Indiana Republican State Committee and as a County Chairman.”

Lamarque says Barbknecht apologized after being called out for blocking his camera.

Vucci and Lamarque have been covering Trump since his 2016 campaign and have photographed numerous Trump rallies. Vucci says Trump’s staff is usually professional and no different from other campaign staff he has worked with in the past.

“It was just something so out of the ordinary, I’ve never seen that before so I assumed people would react to the photo.” Vucci says.

Vucci, who knows Lamarque well, says he talked to him right after the incident.

“I said ‘Hey man I have a photo of this happening’ and everyone was happy it was captured,” Vucci says.

A volunteer for Trump attempts to block the view of protesters a "Make America Great Again" rally in Evansville, Indiana, August 30, 2018.
Kevin Lamarque—Reuters

Lamarque says that was the first time something like this has happened to him but that the press always feel a little on edge during Trump rallies.

“There’s always a little undercurrent of hostility at these events, you can feel that eyes are watching you and judging you. Trump really woke up the crowd yesterday, ramping it up a little bit by calling out the New York Times,” he says.

White House Correspondents’ Association President Olivier Knox said in a statement Friday he had spoken with both the White House and the Trump campaign about the volunteer.

“The Trump campaign assures me that these were the actions of an inexperienced volunteer, who understands he acted in error. The campaign has taken him off the road and promises this will not happen again.” Knox said in a statement.

In 2016 TIME photographer Christopher Morris was detained by U.S Secret Service and local law enforcement while attempting to photograph a Black Lives Matter protestor at a Trump rally in Virginia.

Trump was in Indiana in support of Republican Senate candidate Mike Braun, who is running against Democratic Sen. Joe Donnelly. At rallies, he often directs angry comments at journalists covering his events and pauses to let supporters boo. He also has a history of pointing out protestors and encouraging the crowd to boo until security removes them. During the campaign, there were instances of protestors being assaulted at Trump rallies. 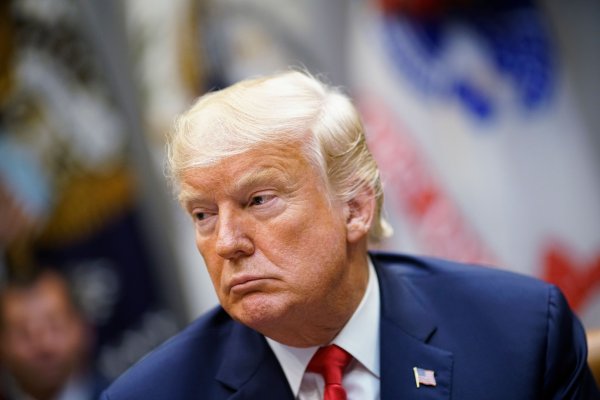 President Trump Denies He Missed a Chance to Unite the Country by Honoring John McCain
Next Up: Editor's Pick