John McCain's Mother, 106, Mourns Son as He Lies in State at U.S. Capitol

Roberta came in to the Capitol Rotunda before 11 a.m. on a rainy morning in Washington, sitting in the front row in a black and white blouse as the flag-draped casket of her son was brought in.

Vice President Mike Pence and Second Lady Karen Pence paid their respects to Roberta when they arrived, stopping by her seat and touching her hand and shoulder as they spoke to her. Roberta held hands with her granddaughter Meghan McCain during speeches by Senate Majority Leader Mitch McConnell, House Speaker Paul Ryan and Pence, as Meghan wiped away tears.

After the speeches, Roberta paid her respects at her son’s casket, making the sign of the cross before she was wheeled away.

Roberta has been slowed by a stroke which now makes speaking a “chore,” John McCain wrote in a book published this year, the Associated Press reports. But he wrote that her “vivaciousness is a force of nature” and that she still has “a spark in her, a brightness in her eyes that would light up the world if she could resume her peripatetic life.”

The Senator referenced his mother’s “peripatetic life” is because she used to love taking adventurous trips around the world, often with her twin sister. Roberta told TIME in 2000 that she’s “like a little turtle” in her journeys. “I just bring a little pair of boots, a raincoat, an umbrella and my binoculars and set out,” she said.

In the same interview, she talked about her special bond with her son John. “That poor soul,” she said. “I do think he’s an awful lot like me–too emotional.” 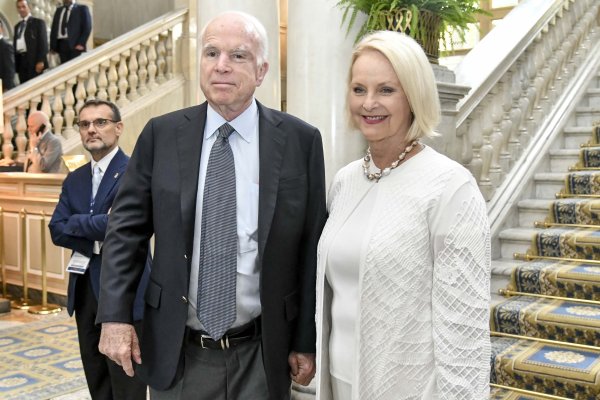 Mary Bono Replaced Her Husband in Congress. She Thinks Cindy McCain Should Do the Same
Next Up: Editor's Pick