President Donald Trump insisted Thursday he properly honored John McCain following his death but wouldn’t say whether he thought the Arizona Republican would have made a better president than Barack Obama.

Trump ordered White House flags raised to full staff the day after McCain’s death, angering many Americans and prompting a letter from the nation’s largest veterans group asking him to keep the flags at half staff until the senator’s burial, an honor that has been bestowed on some other senators who died in office.

Asked if he missed an opportunity to unite the country and made a mistake, Trump disagreed.

Trump and McCain clashed on a range of policy issues. And even after McCain disclosed he had brain cancer, the president continued to grouse in public about what turned out to be one of the Arizona senator’s last votes, blocking a measure to repeal Obamacare.

“We had our disagreements and they were very strong disagreements,” Trump said Thursday. “I disagreed with many of the things that I assume he believed in.”

McCain lost the 2008 presidential election to Obama, an outcome the senator called a “privilege” in a letter to the country released after his death.

Asked if McCain would have been a better president, Trump declined to say, even as his press secretary, Sarah Huckabee Sanders, stared at him.

“I don’t want to comment on it,” he said. “I have a very strong opinion, all right.”

Sanders, he joked, was “having a nervous breakdown” over his response. “Maybe I’ll give you that answer some day later.”

Sanders, aides said, had more than one conversation with Trump this week about paying respects to McCain.‬

Trump faced a bipartisan outcry for his response to McCain’s death. Trump’s only immediate public comment on the six-term Republican senator and former GOP presidential nominee was a brief tweet hours after the death sending condolences to his family.

Flags at the White House were lowered on Saturday night after McCain’s death and raised again Sunday, the bare minimum required by law.

On Monday, Trump refused to say a word about McCain during events at the White House, ignoring reporters’ questions on at least four occasions. After the American Legion wrote a letter to the president imploring him to recognize McCain, Trump relented. The flag atop the White House roof was lowered again at 3:30 p.m. Monday, and the president issued a statement honoring McCain.

“I respect his service to the country,” Trump said in the interview 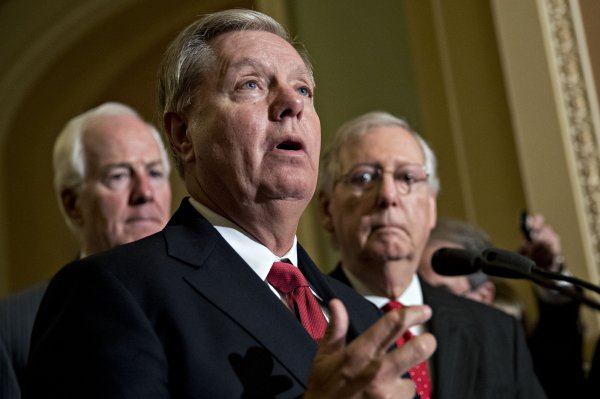 Graham: Trump's Attack on John McCain 'Pisses Me Off'
Next Up: Editor's Pick