Facebook says it has identified a covert Myanmar military propaganda campaign hosted on its platform, the first evidence that the country’s armed forces were behind social media posts targeting the ethnic Rohingya Muslim minority.

In a series of emails to TIME, a representative from Facebook confirmed that an internal investigation launched earlier this year identified dozens of accounts intended to mislead users into thinking that they were independent sources of news while disseminating pro-military propaganda and sometimes false, incendiary content about the Rohingya.

The company announced Monday that it had banned 18 accounts and 52 pages in Myanmar, including those of senior military figures such as Commander-in-Chief Snr-Gen Min Aung Hlaing. It came the same day a U.N. fact-finding mission published a damning report calling for six generals to be charged with crimes including genocide over the military’s role in the violent expulsion of the country’s Rohingya population.

A burnt Rohingya village near the town of Maungdaw, Rakhine State in western Myanmar, on Nov. 12, 2017.
Hein Htet—EPA-EFE/Shutterstock

Violence characterized by rape, mass killings and burning of villages forced more than 700,000 of the persecuted and mostly stateless group to flee to neighboring Bangladesh since Aug. 25, 2017, when the military launched a brutal crackdown following a deadly attack on state security forces by Rohingya insurgents. The U.N. fact-finding mission, which was established by the Human Rights Council and has been banned by the Myanmar government, urged the Security Council to refer the situation to the International Criminal Court. A team of investigators from the U.S. is expected to unveil similar findings soon.

Both Myanmar’s military and its civilian government have met the accusations with blanket denial, claiming that the army has carried out a legitimate counterterrorism operation. A spokesperson for the government on Wednesday rejected the U.N.’s findings, calling them “false allegations” and claiming the country has “zero tolerance for human rights violations.”

“The ethnic violence in Myanmar has been truly horrific,” Facebook said in a press release announcing the ban of 20 individuals and organizations implicated in the violence, as well as the more understated revelation that it had removed an additional 46 Pages and 12 individual accounts it said were engaged in “coordinated inauthentic behavior.”

Confirming long-held suspicions of human rights monitors in the country, Facebook said this behavior amounted to a covert propaganda operation linked to military personnel with a combined reach of up to 12 million users. That number amounts to as much as two-thirds of all Facebook users in the country of 51 million. The names of these banned individuals and pages have not yet been disclosed as Facebook’s investigation is ongoing and more such accounts could still be identified, the company confirmed.

Facebook confirmed that while more than half of the content on these pages was seemingly benign, pro-military pages sought to redirect blame for social unrest away from the army, criticize the civilian government led by Nobel laureate Aung San Suu Kyi and spread content denying Rohingya claims to being indigenous to the country. Only the latter violated Facebook’s Community Standards, but viewed as a whole all of the content was removed on the basis that it constituted covert propaganda, the representative confirmed.

One post made public by Facebook made an unverified claim that weapons bound for Rohingya insurgents had been found alongside a delivery of humanitarian aid for villagers in remote parts of northern Rakhine state, where most of the group is from. This and similar rumors contributed to a widespread belief among many non-Muslims in Myanmar that the international community was abetting terrorist activity. The aid-dependent northwest has been placed under an extreme humanitarian blockade.

Another widely shared post promulgated the military’s false claim that Rohingya villagers had burned down their own houses.

Facebook declined to comment on whether the accounts had paid to “boost” posts, target specific geographies or demographics.

While Facebook’s investigation began earlier this year, sources familiar with early consultations say the issue of potentially inauthentic accounts had been raised as early as 2015 in relation to concerns about the proliferation of hate speech. Those concerns have also been raised directly by U.S. Senators and U.N. officials. The U.N. fact-finding mission’s report published Monday pointed out the “significant” role social media, and in particular Facebook, has played in spreading hate directed toward the Rohingya minority.

“Facebook has been a useful instrument for those seeking to spread hate, in a context where for most users Facebook is the Internet,” the report read. “Although improved in recent months, Facebook’s response has been slow and ineffective. The extent to which Facebook posts and messages have led to real-world discrimination and violence must be independently and thoroughly examined.”

It is unclear how much influence the Myanmar military’s propaganda campaign had on popular attitudes toward the Rohingya, or whether the content incited soldiers or civilians to commit acts of violence. Yangon-based analyst Richard Horsey tells TIME that while the link between online vilification of the group and real-world violence is debatable, “online hate speech and anti-Rohingya narratives have spread very quickly since [internet use has proliferated], and have been key in establishing a virtually-unchallenged consensus of anti-Rohingya hatred in the country.”

Rohingya Muslim refugees disembark from a boat on the Bangladeshi side of the Naf River in Teknaf on Sept. 13, 2017.
Masfiqur Sohan—NurPhoto/Getty Images

Regardless of its potential to incite, experts say the fact that the armed forces accused of perpetrating abuses may have also been behind a campaign to dehumanize them could come up in court. According to Kingsley Abbott, Senior Legal Adviser at the International Commission of Jurists, statements “made on social media, if proved to be authentic, could potentially be admissible as evidence supporting genocidal intent.”

Facebook has indicated a willingness to comply with any legal requests for data it kept from the removed pages. The company has also put in place 60 Myanmar-language content monitors, and says it will have 100 by the year’s end.

While the top brass has carried out its own sweeping misinformation campaign, Myanmar’s government and military have simultaneously sought to disarm and discredit the international media. Two reporters for Reuters, Wa Lone and Kyaw Soe Oo, have spent more than eight months in jail facing charges related to their investigative reporting on a massacre of 10 Rohingya men. The pair, who face up to 14 years in prison under a colonial-era Official Secrets Act, expects to hear a verdict Monday.

“The Tatmadaw has been absolutely shameless in creating fake news,” says Phil Robertson, Deputy Asia Director for Human Rights Watch, “while at the same time falsely accusing journalists of the same thing simply because they produced stories critical of the government and military.” 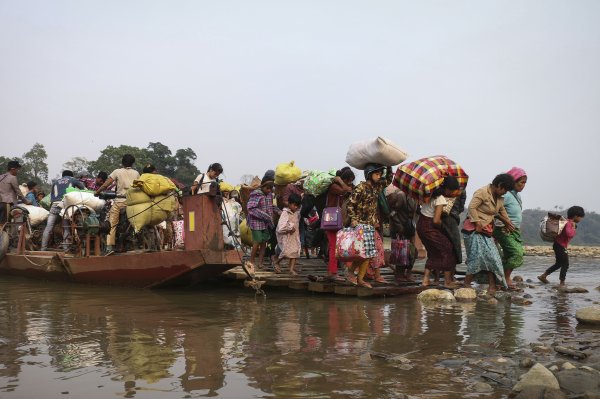 China and the Slow Strangulation of Myanmar’s Ethnic Kachin
Next Up: Editor's Pick