Mary Bono Replaced Her Husband in Congress. She Thinks Cindy McCain Should Do the Same

The death of Sen. John McCain leaves a vacant seat in the Senate, but not for long. With the Arizona primary election over, Arizona Gov. Doug Ducey will fill the opening soon. On his shortlist is none other than McCain’s widow, Cindy.

Cindy wouldn’t be the first widow to succeed her husband in Congress. Historically, eight women have been elected or appointed to replace their deceased husbands in the Senate, and 39 more women have done so in the House. Among those is Mary Bono, who was elected to replace her husband, Sonny Bono, after he died in a tragic skiing accident in 1998, serving until 2013.

Mary Bono hadn’t been involved in politics before Sonny died. When she announced her candidacy, not everyone thought she was qualified, but she was unfazed.

“If a brain surgeon dies, the wife doesn’t step in and perform brain surgery,” she said in an interview with TIME.

But politics “is a far cry from brain surgery… It takes common sense. It takes empathy. It takes intuition. It takes a whole set of skills that almost all of us have,” she said. “But most of all, it takes the courage to just step up and do it.”

Mary Bono, a Republican, won the special election to fill Sonny Bono’s seat the same year of his accident. She didn’t have the celebrity status that Sonny did, or his political background as a former mayor, but she did have the same name, and more than that, she had grief, and she needed to channel that energy to something bigger than herself.

“When I see parents who go through losing a child to a disease or an addiction, so many of them take up a cause,” she said. “My cause was fulfilling Sonny’s legacy and then creating my own.”

Mary Bono developed a platform of her own. She said she was “a little bit more hawkish on national security issues,” and more committed to tech issues and environmental legislation.

“I used to joke that if he had his way,” Sonny Bono “would build condos at the base of Half Dome in Yosemite,” she said, laughing.

Cindy McCain, if appointed Arizona’s next Senator, will likely also have her own agenda. She’s made a name for herself, both as a chair of her family’s business, Hensley Beverage Company, and a co-chair of two human trafficking councils. With John, she also raised her four children.

“Cindy could honor the legacy of her husband by picking up the mantle,” Bono said. “But part of that legacy is the freedom and the courage to be your own person.”

“No one can carry on your husband’s legacy, in the Senate, better than you,” it said.

Politics is “vitriolic, it’s as mean-spirited as it gets,” Mary Bono said. “Unfortunately I think that’s keeping a lot of really good people out of politics altogether.” But Cindy McCain could do a great job, she said.

“I actually think she’s the best one for the job.” 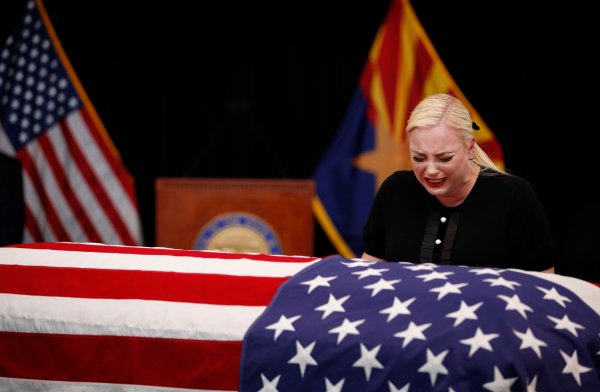 Meghan McCain Weeps at John McCain's Casket as Wife Cindy and His Children Pay Their Respects
Next Up: Editor's Pick