An uncut sheet of the new Series 2001 one dollar bill notes is stored Nov. 21, 2001 at the Bureau of Engraving and Printing in Washington, DC.
Alex Wong—Getty Images
By Albinko Hasic

The dollar has been interlaced with American history since the very beginning. It has been trumpeted as the root of all evil, and touted as the salvation of individualism.

But why does the dollar look the way it does? Though American paper currency has gone through many evolutions, its design has largely been governed by practical concerns.

The story of American currency doesn’t start with the dollar we know and love (or hate). Before paper currency became standardized and issued on a federal level by the new country that became the United States of America — and before the U.S. Treasury was established on Sept. 2, 1789 — it was in the hands of the colonies to mint and issue currency. In the early days of the American colonies, specie (coin) money was the preferred mode of exchange, and preferably foreign bullion, as Eric P. Newman explains in his book The Early Paper Money of America.

In 1690, Massachusetts became the first colony to issue its own paper money, and soon other colonies followed suit. These “bills of credit” created friction between the colonies and Great Britain, resulting in the Currency Acts of 1751 and 1764, which curtailed those bills’ designation as legal tender. As the Revolutionary War ramped up, in 1775 the Continental Congress issued the first overarching colonial currency, known as Continentals.

The actual design of this new continental currency was a far cry from the modern look of American paper money, but already carried familiar motifs. The unfinished pyramid with 13 steps representing the 13 colonies, now recognizable from the Great Seal of the United States, was part of the design of one bill. (The “Eye of Providence” was added to the top later.) Importantly, many of the bills were designed specifically to address a larger economic problem at hand: depreciation and economic warfare in the form of counterfeiting by the British. Benjamin Franklin’s own printing firm attempted to countervail counterfeiters by adding nature prints such as leaves to the notes in an attempt to create a unique design that couldn’t easily be copied.

Nevertheless, runaway inflation and the collapse in value of the continental currency led to the Coinage Act of 1792 and the formation of a new mint. Paper currency could no longer be issued by the states, but private entities and banks filled the role by issuing thousands of different notes of tender for close to 70 years, according to Larry Allen’s Encyclopedia of Money. The federal government would not issue paper currency of its own for another several decades.

With the advent of the Civil War, the Confederacy began to issue its own paper currency; notes were known as “greybacks” because of their two-tone design. Greybacks began circulating in April of 1861 and featured various designs and depictions, including slaves working in a field on the $100 C.S. banknote. Some of the people featured on banknotes include Andrew Jackson, John C. Calhoun, Jefferson Davis, Lucy Holcombe Pickens, George Washington and others. (The idea of putting a leader’s face on money far predates the United States.)

The Union responded in kind by issuing its own version, which featured similar designs to the modern currency found in wallets today, including many inventive anti-counterfeiting measures. One of those measures involved the use of a recently developed technology: ink that guarded against another relatively recent technology, photographic copying. The chemical used to make that ink rendered it green. So, when the reverse side of the new money was printed with it, the bills earned the nickname “greenbacks.” The design on the front varied, but portrayed figures still seen on American money today, such as Alexander Hamilton and Abraham Lincoln.

Following the Civil War, greenbacks continued to be commonly used, while Congress in the 1870s and ‘80s directed the production of five different issues of silver certificates, ranging from $1 to $1,000 dollar notes. These silver certificates included the first and only U.S. banknote to feature a woman on the front, in the form of Martha Washington. The $1 silver certificate issued in 1896 showed her too, as the front featured the likeness of “History instructing Youth” by pointing towards Washington D.C., and both George and Martha Washington on the back of the bill. The $5 note from 1899 highlights the Hunkpapa leader Running Antelope, while others, such as the 1896 series, celebrate electricity and steam power. These bills were backed by actual silver, and were released as the nation was locked in a debate over how best to deal with precious metal and bank notes for the good of the economy. (Gold certificates were also issued, as William Sumner Graham points out in his History of American Currency, although they were not as common as silver certificates.)

It wasn’t until 1913 that the Federal Reserve Act created the surviving modern form of currency. The law gave the federal government the authority to issue Federal Reserve Notes (commonly known as U.S. dollars) as legal tender.

But by that point, many of the design elements now recognizable from the American dollar were already set. The rough proportions, the typeface, the intricate borders, the color green, even some of the wording — all of those components were in use before the Federal Reserve Note was born.

The front of these notes usually featured presidents while the back captured iconic Americana. For example, a $5 note from 1914 featured Abraham Lincoln on the front, and the landing of the Pilgrims at Plymouth Rock on the back. The main designs changed little over the years, with a few noteworthy exceptions. Some denominations have been phased out. The phrase “In God We Trust” was added in the 1950s amid a larger discussion about the role of God in American life. And in 1996, in an attempt to improve anti-counterfeiting measures, the federal government redesigned five of the six remaining denominations. In 2003, more colors were added along with more advanced anti-counterfeiting technology.

As was the case two centuries earlier, the design of the dollar was primarily — but not exclusively — determined by the desire to prevent counterfeiting, not by aesthetic concerns.

U.S. currency has undergone tremendous change throughout its history, much like the country itself. It remains to be seen what sort of changes will take place with the design of the legal tender notes. In recent years, many have argued for a more diverse set of historical figures to be used to be more representative of the country’s population and its history — while others have argued that paper money is on its way out entirely, as people turn to digital currency. No matter what happens, the design of the U.S. dollar will remain a part of the story of America. 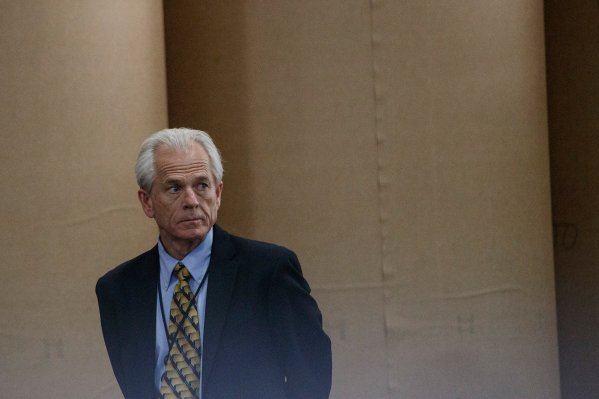 The Former Democrat Behind Trump’s Trade War
Next Up: Editor's Pick