Democrats Want to Stop Brett Kavanaugh. They May Be Out of Options

As the Senate takes up Brett Kavanaugh’s nomination to the Supreme Court this week, both parties are bracing for a battle fit for a courtroom, replete with opening statements, withering questioning and more than two-dozen outside witnesses. But Democrats and Republicans alike believe the verdict is already in.

Barring a bad performance, Kavanaugh’s confirmation to be the next Supreme Court justice appears all but assured. That’s because Republicans can push through his nomination with a simple majority, so long as their caucus holds together. And despite Democrats’ best efforts, there’s little evidence they’ve been able to persuade any GOP senators to vote against him.

“There’s no procedural silver bullet to any of this,” says a Senate Democratic aide. “The only way to defeat Brett Kavanaugh is to flip votes.”

Not that they haven’t tried. Democrats have spent the summer fighting mightily to derail Kavanaugh’s nomination. Outside groups have funneled time and money into probing his record from the White House and his writings as a judge. Activists have held protests. And Senate Democrats have assailed Kavanaugh’s record on issues like abortion, healthcare and executive power. Democrats have painted Kavanaugh, who worked as a lawyer in George W. Bush’s White House and as a member of Kenneth Starr’s independent counsel investigation of President Bill Clinton, as a partisan who would roll back Roe v. Wade and shape the court through his expansive views of executive power.

“I don’t have any doubt where he comes down on these issues,” Illinois Senator Dick Durbin, a member of the Judiciary Committee and the number two Democrat in the Senate, tells TIME. “With all due respect, Judge Kavanaugh speaks fluent Republican.”

The Democratic minority has focused much of its efforts on senators Susan Collins of Maine and Lisa Murkowski of Alaska, two moderate Republicans who support abortion rights. Neither woman has announced which way she plans to vote on Kavanaugh. But Collins said she had an “excellent session” with him when they met in August and that he told her he believes Roe v. Wade is “settled law.” Murkowski said she hasn’t seen anything in Kavanaugh’s record she would consider disqualifying, CNN reports. Both Collins and Murkowski voted for Trump’s first Supreme Court nominee Neil Gorsuch last year.

With limited power and long odds, Democrats are gearing up to grill Kavanaugh this week, hoping he’ll stumble. “I think the Democrats realize the only way they’re going to be able to stop him is if there were some sort of explosive thing” to come out during the hearings, says Carrie Severino, chief counsel and policy director of the conservative group Judicial Crisis Network. As Democrats attacked Kavanaugh, conservative groups launched a forceful campaign to shape voter perceptions of the judge, who has sat on the D.C. Circuit Court of Appeals since 2006. Judicial Crisis Network has spent $4.3 million to support Kavanaugh’s nomination, running ads on Fox, MSNBC and CNN. That’s more than Democratic counterparts, like the progressive judicial advocacy group Alliance for Justice, have been able to spend.

“They’re willing to put up millions of dollars in order to get their judges confirmed,” marvels Nan Aron, president of Alliance for Justice. “Putting judges and justices on the bench is one thing [President Trump] can offer to the right-wing base of his party.”

There’s some evidence that the Left’s campaign against Kavanaugh is working. A CNN poll from August found that just 37% of Americans want the Senate to confirm him, the lowest public support for a Supreme Court nominee since Robert Bork’s nomination by President Ronald Reagan in 1987. Republicans say the opposition has been unfair. “I honestly think that they hate Trump so much that if Donald Trump nominated Barack Obama to sit on the Supreme Court, they’d struggle to be a ‘Yes’ with that as well,” says Antonia Ferrier, Staff Director for the Senate Republican Communications Center. But more importantly, Kavanaugh has maintained support among Republicans: 74% of them would still like to see Kavanaugh confirmed, according to the same poll.

Read More: The Era of the Swing Justice Is Over. Here’s How Democrats May Adapt

As Democrats hammer Kavanaugh on his record, they’re also fighting the process. Kavanaugh has a longer paper trail than most other Supreme Court nominees in history, working for years in Bush’s White House counsel’s office and then as staff secretary, a key position that oversees the flow of all documents to the President. The vast trove of papers from Kavanaugh’s three years as staff secretary won’t be made public before the hearings. While Democrats complain that the Senate Judiciary Committee has received just 6% of documents from Kavanaugh’s time in the White House, Republicans note that the more than 200,000 pages from Kavanaugh’s government work mark a new record for Supreme Court confirmations.

Democrats have called for the release of more documents and asked to delay the hearings until they’re available. “There is this determination now that hell or high water we’re going to go forward with this Kavanaugh nomination and do it as fast as possible,” says Durbin. He and the nine other Democratic members of the Judiciary Committee all signed a letter registering their opposition to the process.

But Republican leadership won’t budge. “Unfortunately, some have tried to criticize what is the most transparent confirmation process in history,” Judiciary Committee Chairman Chuck Grassley said on Aug. 16. “But they’re failing. And they’re failing because Democratic leaders have made their true goal obvious: stall the confirmation as long as possible in the hope that Democrats take over the Senate in the midterm elections.”

Democrats bear some of the blame for their own powerlessness. Democratic Senate Leader Harry Reid began to erode the rules surrounding judicial nominations when he eliminated the filibuster on all presidential nominees—except those to the Supreme Court— in 2013. In March 2016, Republicans took it to another level when they refused to hold hearings to confirm Judge Merrick Garland, President Obama’s nominee to fill Justice Antonin Scalia’s Supreme Court seat. Senate Republicans said they wouldn’t hold a hearing for Garland because it was Obama’s last year in office.

After they refused to consider Garland, Trump won the presidency and nominated conservative judge Neil Gorsuch to fill the seat instead. Traditionally, Supreme Court confirmations had required some measure of bipartisan consensus to clear a 60-vote threshold, but with Democrats still furious over Garland, in 2017 Republicans invoked the same so-called nuclear option Reid had five years prior, this time for Supreme Court nominees. They confirmed Gorsuch with a simple majority.

Trump and Senate Majority Leader Mitch McConnell have used the majority to great effect, filling 60 judgeships so far in the President’s term. That’s more than Bush and Obama combined had appointed at the same point in theirs, according to Pew Research Center. And if they confirm Kavanaugh, it will cement a conservative majority on the nation’s highest court for decades. 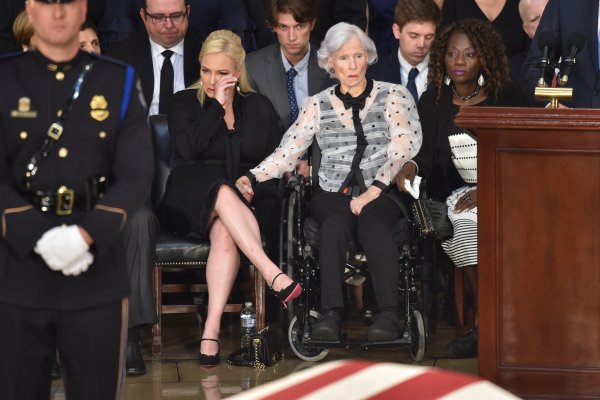