Lady Gaga Delivers a Knockout Performance in A Star Is Born

There’s only one antidote for the weird world we live in, an age of political anxiety, Instagram envy, humorless personal essays that treat basic life experiences like major tragedies, and selfies: We need more melodramas, movies that show human beings making all sorts of wrong choices, falling in love with people from whom they should run a mile, and in the end recovering lost bits of themselves, all while looking fabulous. Exaggeration is key—a tasteful, sensible melodrama is no melodrama at all—and you need a star who can radiate the nobility of suffering with Kabuki-level grandeur. Someone like Lady Gaga.

Bradley Cooper’s A Star Is Born is just on the right side of tasteful, which is to say it’s slightly on the wrong side: It could stand to be more nutso in its expression of grand human emotions and dismal human failures. But it works anyway: You come away feeling something for these people, flawed individuals who are trying to hold their cracked pieces of self together—or to mend the cracks of those they love. Cooper plays charming but sozzled country star Jackson Maine, a guy who gets through each show—and every day—losing himself in booze. He’s losing his hearing, too, though he’s of course in denial about that, no matter how much his brother and ersatz caretaker, Bobby (Sam Elliott), tries to talk sense into him.

Enter Lady Gaga—the superstar who was born Stefani Germanotta, though the movie doesn’t credit her as such—as Ally, a restaurant worker who also sings and writes songs. After lurching through one of his own shows, Jackson sees her performing in a drag bar—the queens all love her, so they’re happy to have her onstage. In her tiny slip dress, with hyper theatrical eyebrows, like slender black parentheses, stuck over her own, she’s like an alien from Planet Song, shimmering her way through “La Vie en Rose.” If you’re looking for comparisons to Janet Gaynor, Judy Garland or Barbara Streisand, the other Star Is Born stars (this is the third or fourth remake, depending on whether or not you count George Cukor’s 1932 What Price Hollywood?), Gaga isn’t much like any of them: She’s more like Liza Minnelli, who channeled some of her mother’s fragility but tempered it with pluckiness. When Gaga’s Ally sings, she’s less a creature from over the rainbow than a sprite from another world who has quickly learned the ropes of our own fire and earth.

No wonder Jackson falls for her. Her persuades her to have a late-night, post-show drink with him, and she gets into a fist fight defending him from a boor waving a phone camera in his face: This is the beginning of a pattern, that of the woman trying to save the man, but her boldness is striking. Jackson drives her to a convenience store and applies a bag of frozen veggies to her hand; he’s the caretaker for now. Then, as they sit in the nighttime parking lot, he removes her rings, lest they get stuck, by closing his lips gently around her swelling fingers. She returns the favor by singing, at his request, a scrap of a song she’s written. It’s a lovely scene, a brush-stroke vignette of two people finding enchantment in one another.

If you’ve seen any of the previous Star Is Born iterations—the 1937 with Gaynor and Frederic March, the 1954 with Garland and James Mason, or the 1976 with Streisand and Kris Kristofferson—you know just how wrong this story can go. And if you’re new to this particular formula, welcome. Cooper’s version proves there’s always a way to freshen up old material. The finest scenes are the early ones, in which Jackson, with true generosity, gives Ally’s career a boost, first by inviting her onstage for a song, and then turning her into a true partner.

The big question that’s been hovering in the air for months is, Can Lady Gaga act? It’s a ridiculous question. Singers often make fabulous actors. They’re primed for it: All singing is acting. But what’s surprising about Gaga is how charismatic she is without her usual extreme stage makeup, outlandish wigs and inventive costumes. It’s such a pleasure to look at her face, unadorned, with that extraordinary, face-defining nose—it’s like discovering a new country. Later in the story, as Ally’s career takes off while Jackson’s fizzles, Gaga is less entrancing though no less likable: Ally connects with a manager who reshapes her image (Rafi Gavron), turning her from a fresh-faced singer-songwriter to a pop siren with hyper-red hair and increasingly theatrical clothes. This is where the movie loses a few puffs of steam. It’s hard not to miss Ally’s unadorned face and unflashy brown hair: You might find yourself wanting more Germanotta and less Gaga, Even so, Ally the superstar is still nowhere near as mythically outsized as Gaga herself is. In fact, as pop creations go, she’s rather average, though she certainly knows her way around a power ballad.

And she’s still the star of this whole show. As her co-star and director, Cooper shows an artistic generosity that’s almost courtly. The basic Star is Born story is geared so you pity the man almost more than you admire the woman. In every version, the man threatens to steal the show with his own degradation; the woman’s protective fortitude is far less interesting. But as an actor, Cooper fades into the corner at just the right moments, allowing Gaga to shine. He recognizes that as a performer, she’s larger than life; he’s just about life-sized, and there’s no shame in that. He also creates a suitable showcase for small but terrific performances from the likes of Dave Chappelle (as one of Jackson’s more sensible friends from the music world) and Andrew Dice Clay (as Ally’s limo-driving dad, Lorenzo).

Cooper makes some smart plot choices, too. (The screenplay is by Eric Roth, Cooper and Will Fetters.) Jackson’s demise is sensitively handled—nothing like Kris Kristofferson crashing his car just so Streisand can rush to the scene and cradle his lifeless head with sorrowful gusto. (Who thought that was a good idea?) And he keeps the filmmaking straightforward and unvarnished. It’s wonderful to see a first-time filmmaker who’s more interested in effective storytelling than in impressing us; telling a story effectively is hard enough. Best of all, Cooper has succeeded in making a terrific melodrama for the modern age. This is a story of big personalities and even bigger human mistakes. These days we’re always ready for our own close-ups. What a relief to turn the stage over to someone else for a change. 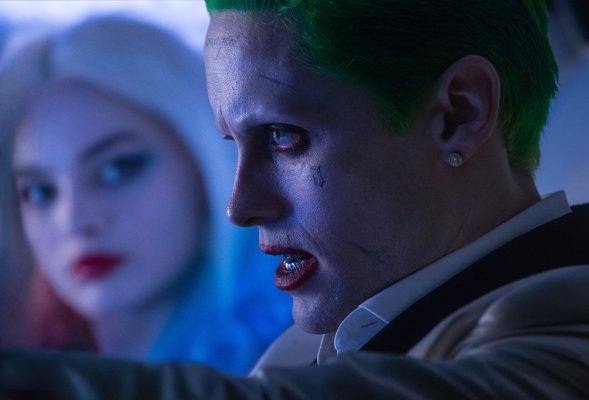 Here Are All the Upcoming Joker Movies
Next Up: Editor's Pick