Speaking at the late senator’s memorial at the North Phoenix Baptist church in Arizona, Biden reflected on his close friend’s impact on American politics and those he represented for decades, offering an intimate portrait of the senator who has been remembered for his values and placement of country over politics, and decency over power.

“My name is Joe Biden, I’m a Democrat and I loved John McCain,” the former vice president began, summarizing his complicated, cross-party relationship with his political opponent.

“I always thought of John as a brother. We had a hell of a lot of family fights,” he joked.

While the two were political opponents over the years — and most memorably in the 2008 presidential election — their relationship, at its core, was based in friendship and mutual respect. Biden reflected on their decades of friendship — beginning in the 1970s when McCain served as a liaison between the Navy and the Senate, and joined Biden on numerous overseas trips. In their travels, they would talk about everything, Biden recalled, and developed a friendship that “transcended whatever political differences we had.” When McCan became his Senate colleague starting in the 1980s, their friendship continued despite working on opposite sides of the aisle.

“It was always about basic values with John,” Biden said. “Fairness, honesty, dignity, respect. Giving hate no safe harbor, leaving no one behind. And understanding that as Americans we are a part of something much bigger than ourselves.”

“John McCain’s impact on America is not over,” Biden said.

Biden’s stirring eulogy was part of a number of tributes to the late senator before his body left Arizona for the last time. Along with family members and friends, more than 30 current and former senators (Republicans and Democrats, alike), Arizona Gov. Doug Ducey, local officials, Arizona sports stars and around 1,000 Arizonans paid their respects Thursday. Biden’s tribute followed one from Arizona Cardinals star Larry Fitzgerald, who drew laughs with stories of his “unlikely” friendship with McCain, as well as from former Arizona Attorney General Grant Woods. Two of McCain’s children — Andrew and Bridget — spoke at the memorial, a school choir performed “Amazing Grace,” and the recessional was set to the tune of Frank Sinatra’s “My Way.”

While Biden’s eulogy reflected the numerous tributes to McCain over the last week that have honored his emphasis on value and integrity in politics, it came from a profoundly personal place, too. Biden knows loss — and knows it well. McCain and Biden first met not long after the former vice president lost his wife and daughter in a tragic traffic accident in 1972. The same cancer that took McCain’s life took that of their colleague Ted Kennedy’s nine years ago. And in 2015, Biden’s son, Beau, lost his life due to the same disease.

“There are times when life can be so cruel, pain so blinding, it’s hard to see anything else,” Biden said. “It’s brutal, it’s relentless, it’s unforgiving.”

Speaking to McCain’s family directly, Biden imparted his wisdom on loss — and life after loss. Six months after McCain’s death, he says, the pain will still rear its head. But “you know you’re going to make it when the image of your dad, your husband, you friend crosses your mind and a smile comes to your lip before a tear to your eye,” Biden said.

“To paraphrase Shakespeare,” Biden concluded, “We shall not see his like again.”

Larry Fitzgerald reflects on his “unlikely” friendship with McCain

In his tribute, Fitzgerald *highlighted* the many differences between he and McCain to make a point about the senator’s approach to his life and how he represented his constituents.

“I’m black; he was white. I’m young; he wasn’t so young,” Fitzgerald joked. “He ran for president; I ran out of bounds. I have flowing locks, and, well, he didn’t. How does this unlikely pair become friends? That’s just who he is.”

Fitzgerald and McCain met by chance in 2006, and Fitzgerald detailed their years of friendship. McCain visited Cardinals practices and joked about Fitzgerald’s performance with him. He gave Fitzgerald a private tour of the Senate. In 2013, Fitzgerald traveled to Vietnam, where he visited the lake where McCain’s plane was shot down and the prison cell he was kept in.

“While from very different worlds,” Fitzgerald reflected, “we developed a meaningful friendship. And this highlights the very rare and very special qualities of Senator McCain.”

Former Arizona Attorney General Grant Woods, a longtime friend of McCain’s and chief of staff to him when he was a U.S. Representative, honored the late senator with a eulogy that poked fun at his driving skills while also offering a hopeful look at what his legacy could be in this tumultuous time in American politics.

“I hope what he stood for will maybe get a renewed look in our country,” Woods said. “That’s what he would want.”

“John McCain believed in our Constitution. And he stood up for it; he fought for it every step of the way,” Woods said. “He would not stand by as people tried to trample the Constitution or the Bill of Rights, including the First Amendment.”

Woods, who had criticized President Donald Trump, could have been pointing to McCain’s resistance to the president in recent months. The president was not invited to McCain’s services in D.C., and, as McCain’s casket arrived at the church in Phoenix, Trump was tweeting about his grievances with CNN.

But Woods’s eulogy drew laughs from McCain’s family, friends and Arizonans, too. He recalled his first two hours as chief of staff for McCain when he was a U.S. Representative, describing McCain’s poor driving and goofy demeanor.

A slew of Arizona officials and community members also eulogized the late senator and performed at the memorial. The school choir from Brophy College Preparatory in Phoenix — where McCain’s sons Jack and Jimmy attended — performed a rendition of “Amazing Grace” early in the memorial.

Tommy Espinoza, the president and chief executive officer of Raza Development Fund, a large development fund for the Latino community, spoke about his longtime friendship with the late senator, who he first dined with on the senator’s birthday — a quirky story that drew laughs during Espinoza’s eulogy.

Additionally, Jonah Littlesunday, a Navajo flutist, performed at the memorial — a nod to McCain’s work for the Native American community in Arizona.

Memorials and tributes will continue into the weekend

The memorial is just the beginning of a series of events to honor for the late senator, who died Saturday after a year-long battle with brain cancer. With the recessional Thursday, McCain will leave Arizona with a small ceremony at the Sky Harbor Airport with Arizona National Guard members. His body will then lie in state at the United States Capitol in Washington, D.C., on Friday, with a ceremony featuring his congressional colleagues, and time in the afternoon and evening for the public to pay their respects.

On Saturday morning, there will be another ceremony for the late Senator at the Washington National Cathedral, with tributes from his children, as well as eulogies performed by former President George W. Bush and former President Barack Obama.

Before the memorial Thursday, McCain’s body lay in state at the Arizona state Capitol Wednesday — which would have marked his 82nd birthday — as thousands of people paid their respects to their late senator. Family members, including his wife Cindy McCain and daughter Meghan McCain, also visited his flag-draped casket Wednesday with emotional and tearful goodbyes. 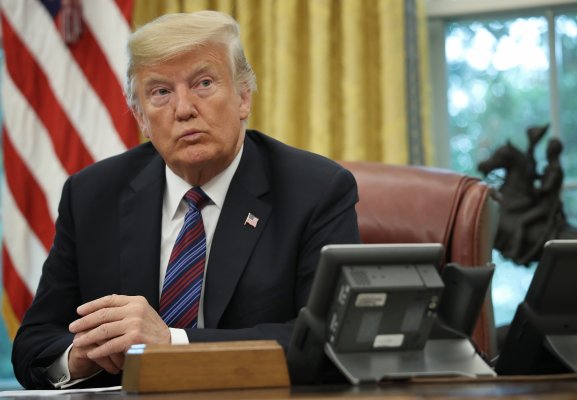 Trump Talks About 'Respect' for John McCain in First Official Statement Since the Late Senator's Death
Next Up: Editor's Pick