Can We Really Trust the Wealthy to Fix America?

But then think about this: All of those people I just mentioned, and others like them — they’re also widely revered. They’re popular heroes. Many people speak of them as saviors, visionaries, philanthropists, and revolutionaries.

Why are we so confused about whether these plutocrats have our backs?

Having spent the last few years researching a book on the super-rich and their efforts to change America and the world, I think we are confused about the super-rich because their actions are contradictory. We live beneath one of the more socially concerned elites in history — and also, by the cold logic of numbers, one of the more predatory. The predation hides in plain sight in the way that America’s elites have, as we regularly hear, rigged the society to ensure that the future mainly benefits them. The richest one percent now claim about a quarter of the nation’s income — a level unseen since the 1930s.

Winners Take All The Elite Charade of Changing the World, by: Anand Giridharadas

On the other hand, today’s rich are socially minded and incredibly generous, seemingly giving back every chance they get. Americans as a whole gave away $410 billion last year, according to the National Philanthropic Trust. The Giving Pledge, initiated by Bill and Melinda Gates and Warren Buffett, has now signed up 184 of the world’s richest people to donate most of their wealth. And seemingly every corporation has a social responsibility drive and/or a foundation to “do good.”

Yes, today’s rich are generous. But much of their generosity also contributes to the disease it seeks to cure. A central problem of American life today is that our society is run for the few, not the many. Today’s elite giving tends to perpetuate that dynamic. Thus giving becomes the wingman of taking, seeking “change” becomes the wingman of preserving the status quo, and generosity undermines democracy.

That destruction begins with the way generosity is allowed to masquerade as justice. Most of America’s winners tend to make as much money as they can, in whatever ways they must. They pay people as little as they can get away with, lobbying for a federal minimum wage of $7.25 that is meaningfully lower than that of similarly prosperous countries. They avoid taxes with all their ingenuity, with a 2017 study finding that nearly 40 percent of America’s largest companies paid zero income tax in at least one year of an eight-year stretch (and a fraction of them, including General Electric and Priceline.com, had a net negative tax bill over that period, actually earning rebates from the government). They push an environmental deregulation agenda that is bad for people’s lungs but good for the bottom line.

During this money-making phase, no matter what social problems they may be adding to, the winners thwart bids by government to interfere. And then, having helped cause these problems, a little ex-post-facto generosity allows them to rebrand themselves as helpers and solvers. McDonald’s, having fed millions of children unhealthy food, builds a few playgrounds where a sliver of those children might exercise. Goldman Sachs, having helped fuel a financial meltdown that cost people their homes, donates to charter schools that benefit some of the poor communities hit hardest by foreclosure. Of course, individual recipients of this do-gooding do benefit, and lives are made easier and sometimes even saved. But these kind acts also serve to buff the winners’ reputations just enough to deter the public from acting to defend its own interests.

Darren Walker, the president of the Ford Foundation, one of the largest players in the philanthropy world, describes the prevailing approach this way: “You go out there and you make as much money as you can in the world, and you do all you can to make our capitalist system work—and then you’re a philanthropist. It’s phased, and it’s compartmentalized.” What Walker has learned from observing business types is how this phasing makes it easier to feel decent. “Compartmentalizing is a means of coping,” he told me. “And so, sure, there are things that they know, they see, on a daily basis that must, if they’ve got any morality, appall them.” But they tell themselves that “in my spare time, I’m going to be on that board in that school up in Harlem; or I’m going to mentor these three black boys in Bed-Stuy, and I’m going to get them to Yale.”

Generosity also undermines democracy by giving the winners even more power over public life than they already have through the money and political influence they possess. Mark Zuckerberg decides he wants to get rid of all the diseases. Bain & Company, the management consulting firm, declares, “We’re aiming to transform the whole social sector.” Hedge-fund tycoons decide that charter schools are really the way to go — rather than, say, funding public schools adequately and equally. Each of these are worthy subjects of public debate. When they’re “solved” through generosity rather than democracy, the public has zero say, and the projects have little accountability.

Generosity attacks democracy in another way. As the winners rebrand themselves as change agents, they end up on panels about inequality and social justice, they fund institutes, they write books and give lectures on the topic, they speak about their giving on television — and slowly but surely, they succeed in altering the language in which public problems are thought about. Consider the Beeck Center for Social Impact & Innovation at Georgetown, launched thanks to a $10 million donation from Alberto and Olga Maria Beeck, who made much of their money in the mining business in South America. The center concerns itself with some of the most urgent public problems. Yet the promotional materials put out by the center illustrate how business language has conquered the sphere of social change and pushed out an older language of power, justice, and rights. The purpose of the center is to “foster innovation and provide a unique skill set.” The center “engages global leaders to drive social change at scale.” It provides tools to “leverage the power of capital, data, technology and policy to improve lives.” The solution of public problems through public action—changing the law, going to court, organizing citizens, petitioning the government with grievances—go all but unmentioned.

Over time, this language influences the society and helps warp its sense of its own afflictions. It may convince the public not to view the winners as perpetrators of the winners-take-all economy, but rather as people doing their best to help. Even if the winners keep lobbying for health and education policies that reliably shut most Americans out of progress, even if the companies they run continue to pay people too little, even if they fight for the billionaire tax breaks that have helped to make the rudiments of a decent life unavailable to millions, even if they harm our health or environment — even so, they can acquire the glow that generosity confers. Thus it can be more common to hear families like the Sacklers, the Resnicks, and the Waltons lauded for their philanthropy than for any role they might have played in causing our ailments.

In recent years America’s winners have used that generosity to redefine social change as something that should never threaten them. They have spread the idea that people must be helped, but only in market-friendly ways that do not upset fundamental power equations — social impact investing, not tighter regulation of Wall Street; charter schools, not properly funded public schools; “micro-entrepreneurship” for workers, not job security. In other words, the society should be changed in ways that do not change the underlying economic system that has let the winners win and fostered many of our problems.

We need to take back the changing of the world. Billionaires won’t save us, whether they come in the form of Zuckerberg or Musk, Donald Trump or the rich people who we are told might save us from Trump, like Oprah and Michael Bloomberg. Only we can save us, by getting involved in politics and civic life and reforming our common institutions and rewriting our basic social contract. We need to reinvent our tax system in an age that favors investors over most of us and allows money to slink around the world untraced. We need to reinvent how we protect workers in the age of fleeting gigs and ever-shifting hours. We need to reinvent education in an age that has made knowledge so accessible but has also frozen America’s social mobility.

What we don’t need is another season of galas and generous initiatives with names on a plaque. We need an age of reform. The first step in that direction is remembering that it is possible—and thrilling—to improve the world without permission slips from the powerful.

Parts of this essay is adapted from Giridharadas’s new book, Winners Take All: The Elite Charade of Changing the World. 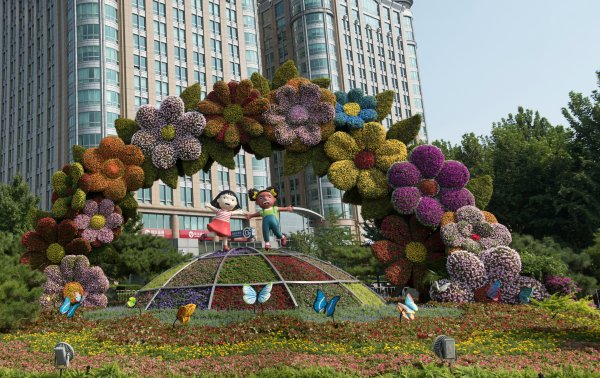 How Chinese Loans to Africa Threaten U.S. National Security
Next Up: Editor's Pick