The family of late Arizona Sen. John McCain tearfully paid their respects at a memorial service honoring him Wednesday at the Arizona Capitol.

McCain’s widow, Cindy McCain, was the first to say goodbye as he laid in state, touching his flag-draped casket and gently resting her head on it and kissing it before walking away.

Meghan McCain, the late Senator’s daughter who publicly and fervently defended her father, followed. She wept as she walked up to the casket and touched it with her with right hand, leaning on it for support as she walked away audibly sobbing.

Meghan McCain, daughter of Sen. John McCain, touches the casket during a memorial service at the Arizona Capitol on August 29, 2018, in Phoenix, Arizona. John McCain will lie in state at the Arizona State Capitol before being transported to Washington D.C. where he will be buried at the U.S. Naval Academy Cemetery in Annapolis. Sen. McCain, a decorated war hero, died August 25 at the age of 81 after a long battle with Glioblastoma, a form of brain cancer.
Jae C. Hong - Pool/Getty Images

When he passed away on Saturday, Meghan shared an emotional farewell statement to her father on Twitter, writing “All that I am is thanks to him. Now that he is gone, the task of my lifetime is to live up to his example, his expectations, and his love.”

McCain has six other children, who are generally less visible in the public eye than Meghan – a host on ABC’s The View. McCain adopted his first wife Carol’s sons from a previous marriage, Doug, 58, and Andy, 56, before having one child with Carol – his oldest daughter Sidney, 51. He went on to have three children with his second wife Cindy — Meghan, 33, Jack, 32, and Jimmy, 30. The couple also later adopted their daughter Bridget, 27, from Bangladesh.

All seven of his children sat together after publicly mourning their father at the Capitol Wednesday.

The Arizona Capitol viewing was also open to the public Wednesday afternoon for those who want to pay their respects. The full schedule of memorial events honoring McCain can be found on his website.

The late Senator served in Congress for more than three decades and was widely admired for his patriotism and military service in the Vietnam War. He died Saturday after succumbing to an aggressive form of brain cancer. Wednesday would have been his 82nd birthday.

McCain planned his own funeral, and asked former presidents George W. Bush and Barack Obama to eulogize him. He requested that President Donald Trump not attend his funeral.

McCain’s body will be flown to Washington D.C. later this week and buried at his final resting place in the U.S. Naval Academy Cemetery in Annapolis. 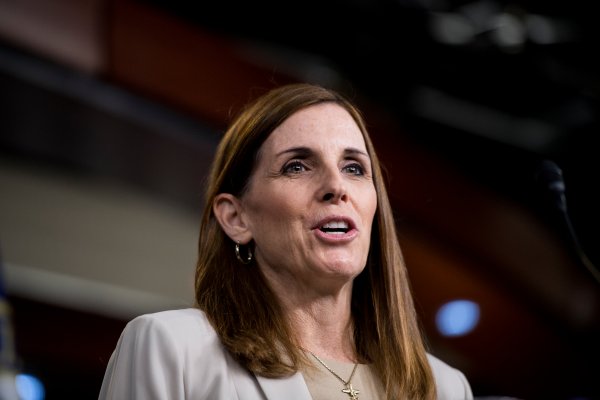 McSally Wins in Arizona After Embracing Trump
Next Up: Editor's Pick