The Myanmar military came under heavy criticism early this week over the violent expulsion of the country’s Rohingya Muslim minority, for which the U.N. now says several army leaders should be charged with crimes including genocide. Thursday brought even more scrutiny for the country’s notorious generals, as rights researchers detailed further abuses allegedly committed against minority villagers in Myanmar’s conflict-torn northeast.

Fortify Rights, a Bangkok-based human rights organization, published damning new evidence Thursday that Myanmar’s government, and in particular the military that still holds considerable power, has deliberately blocked the delivery of life-saving aid to civilians displaced by the civil war raging in Kachin and Shan states, a mountainous region bordering China, suggesting these actions violate international human rights law and should be prosecuted.

Conflict has raged in Kachin and Shan states since a ceasefire that lasted 17 years between Myanmar’s military and the Kachin Independence Army, one of the country’s largest and most powerful non-state ethnic armed groups, broke down in 2011. According to Fortify, Myanmar forces have “killed, raped, and tortured civilians with impunity,” and both sides of the conflict have continued to use land mines and child soldiers. More than 106,000 civilians have been displaced there in recent years.

Moreover, Fortify accused the military of “weaponizing the denial of humanitarian aid,” claiming that the internally displaced people, or IDPs, have been systematically denied vital resources such as food, water, healthcare and shelter — an act that it says could constitute a war crime. “The extent to which the Myanmar government is denying people aid in Kachin state is staggering,” Fortify Rights Myanmar human rights expert David Baulk told reporters Thursday, calling for the restitution of “safe, sustained and unfettered access to all displaced populations.”

Based on 195 interviews conducted over the last five years, the report says the Myanmar government suppressed travel permits, which humanitarian agencies must obtain via a “complicated, time-consuming, and inconsistent” process in order to deliver aid. From June 2017 to June 2018, just 5% of 562 applications filed by international groups for government-controlled areas were approved. Since May 2017, 40,000 IDPs in rebel-held areas have been effectively cut off; one humanitarian actor said the process felt so futile that organizations were discouraged from even trying.

Read more: On the Front Lines with the Kachin Independence Army

Earlier this week, a panel of U.N. human rights experts published a scathing report of an international fact-finding mission appointed to investigate alleged atrocities committed in Myanmar’s western state of Rakhine, where a brutal military crackdown sent more than 700,000 Rohingya fleeing across the border to Bangladesh. Myanmar authorities deny the accusations of genocide and crimes against humanity that have been leveled against them, claiming the international community is biased.

The U.N.’s report, unprecedented in its severity, identified six senior military leaders including Commander-in-Chief Snr-Gen Min Aung Hlaing as among those who “must be investigated and prosecuted for genocide in the north of Rakhine State, as well as for crimes against humanity and war crimes in Rakhine, Kachin and Shan States.” The U.N. Security Council has been urged to refer the situation to the International Criminal Court. 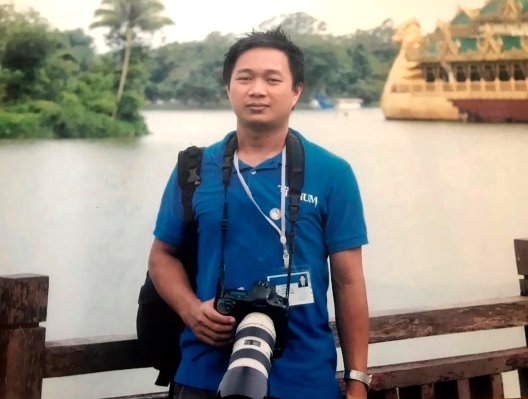 6 Journalists Charged by Myanmar Government
Next Up: Editor's Pick