Meghan’s Givenchy gown will be shown to visitors at Windsor Castle, where she tied the knot, and Holyroodhouse, in Edinburgh, Scotland.

And, as a bonus, royal fans will also get to see her glittering tiara that held her 15ft long flowing veil in place as she wed Prince Harry on May 19, the Royal Collection says. It will be the first time the diamond and platinum bandeau tiara, lent to Meghan, 37, by Queen Elizabeth, 92, will be on public display. Featuring diamonds set in platinum, it was made in 1932 for the Queen’s grandmother Queen Mary and features a center detachable brooch made of ten diamonds dating back to 1893.

Insiders suggested recently that the show was in the works, but what wasn’t known was that it would include the tiara and take on a mini-tour of the U.K. The gown will go on show at Windsor on October 26, and will head to Edinburgh next summer.

Alongside Meghan’s outfit, visitors will also be able to see Harry’s frockcoat uniform of the Household Cavalry. The one on show will be an exact copy of the prince’s uniform that was made by tailors at Dege & Skinner on Savile Row, London.

But it is Meghan’s outfit that is likely to receive the most attention. Created by the British designer Clare Waight Keller at Givenchy, it was made from an exclusive double-bonded silk cady, developed by Waight Keller following extensive research in fabric mills throughout Europe, the Royal Collection says.

In this undated handout image released by the Royal Household, Queen Mary's Diamond Bandeau, which is being worn by Meghan Markle for her wedding to Prince Harry on May 19, 2018.
Handout/The Royal Household/Getty Images

The veil was embroidered with image of the flora of the 53 countries of the Commonwealth, underlining the important part the family of nations linked to the U.K. will play in the royal couple’s official work. Meghan, who became the Duchess of Sussex on her wedding day, added two flowers to the decoration: Wintersweet (Chimonanthus praecox), which grows in front of Nottingham Cottage, at Kensington Palace where she and Harry, 33, live, and the California Poppy (Eschscholzia californica), which is the state flower of California, her place of birth.

Meghan chose Waight Keller to make her dress “for her timeless and elegant aesthetic, and for the impeccable tailoring of her creations,” says a statement from the Royal Collection, which will host the shows.

Shortly after the May 19 ceremony, Waight Keller told reporters, “It was a wonderful way to start the collaboration with her, finding out what she wanted for her day and just to find the absolute perfect style for her. ”

“Part of it was really a conversation in the beginning and then through a series of sketches that I proposed to her. We exchanged conversations about what would be the ultimate lines and proportions and the scale of the dress.”

After the displays have been completed, the Royal Collection will give a donation to the couple’s charitable outlet, The Royal Foundation.

A Royal Wedding: The Duke and Duchess of Sussex will be on display at Windsor Castle from October 26, 2018 to January 6, 2019, and at the Palace of Holyroodhouse from June 14 to October 6, 2019. Tickets are available via their website. 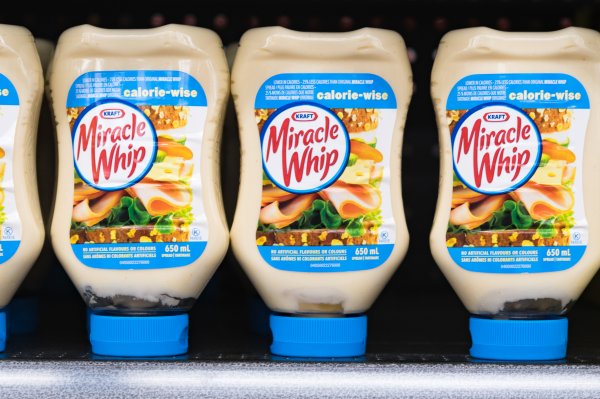 Town Temporarily Changes Its Name to 'Miracle Whip' for a Totally Legitimate Reason
Next Up: Editor's Pick