Martha McSally had a clear objective in the Republican Senate primary in Arizona: keep Donald Trump from endorsing one of her two rivals who were, without question, more like the outlandish President than she would ever be.

So she quoted Trump and played up her use of profanity in her ads. “I’m a fighter pilot and I talk like one!” she said gleefully in one TV spot. She ditched her support for a bill to protect young people who came to this country illegally with their parents, the so-called Dreamers. She boosted the President’s proposed border wall, even though in flashes it was clear she thought the whole thing a boondoggle. She banned reporters, called legitimate news organizations “fake news” and prayed no one would ask her about Trump.

On Election Day, when asked her view on Sen. Jeff Flake, a vocal Trump critic who is leaving the seat she seeks, she told NBC News “you guys can sort that out.” She even started to hold Sen. John McCain, who was battling brain cancer, at arm’s length.

In the end, it was sufficient. The two-term Congresswoman prevailed Tuesday in her primary against former state Senator Kelli Ward and convicted sheriff Joe Arpaio, an anti-immigration crusader. The campaign had been messy, but McSally, the former Air Force fighter pilot, kept her head down and let the fight on her right fizzle out.

Republicans in Washington let out a sigh of relief, too. Perhaps, finally, they could stop worrying about Ward, seen in Establishment circles as a kooky fringe candidate who in 2016 set out to primary McCain. “Bullet dodged,” one Republican strategist texted TIME as the first numbers came in. The general election, the strategist added, is “still gonna be tight.”

McSally survived, but at what cost? Is the top Republican recruit in the country now too aligned with Trump to prevail in November’s general election against Democratic nominee Kyrsten Sinema in a state that is trending purple? While Trump carried Arizona in 2016, he did so with just 49% of the vote. Without Trump atop the Republican ticket, is it possible a Trump-styled candidate can do better, in an election that is expected to have lower turnout?

In other words, did McSally lurch so far to the right as to jerk a potential win over a mesa’s edge? Can she slide back to the middle, a comfortable spot for her? After all, in 2016, she carried her district by 14 points while Hillary Clinton carried it by just 5 points.

McSally had few better choices. There was no way she could out-scream Ward, so she refused to participate in televised debates. She met just once for a head-to-head conversation, moderated by the Arizona Republic editorial board, and the results were terrible. So McSally didn’t spend much time on Ward, instead running television ads against her likely rival Sinema.

McSally also knew the voters. Arizona’s Republicans have been some of the most Trump-aligned in the country. Flake decided he’d rather leave his seat at the end of his term early next year than cozy up to Trump to survive. That opened the door for McSally, although it necessitated a reinvention of sorts into a Make America Great Again supporter. The change could yet cause her trouble with moderate and independent voters in the general election, just 10 weeks away.

Republicans in Washington and Phoenix alike view Sinema as a formidable rival who might be able to peel off some Trump backers, too. After all, when asked on Election Day about Flake, she gushed to NBC News: “I’m a fan of Jeff Flake. He is a friend of mine and someone with whom I sometimes disagree on policy, but who I believe has the utmost character and integrity.”

All of this leaves McSally with some change on deck. Sinema is a far more polished candidate than McSally’s primary rivals.

True, Ward had sanded off some of her rough edges for most of the campaign. But in the final run-up to Election Day, some of her harsher traits came to the fore. When McCain’s family announced that he was ending medical treatment for his brain cancer on Friday, Ward seemed to suggest the McCains were releasing the information to step on her momentum. She doubled down on that claim in a session with reporters and, after McCain died on Saturday, tweeted that political correctness is a “cancer” — a clear effort to inspire outrage and offense in a state where McCain was once so deeply unpopular with a corner of the state’s conservatives that the state GOP censured him. The early numbers suggested she would come up well short of the 40% she drew when she ran against McCain in 2016.

Arpaio, a favorite of anti-immigration hardliners, did little to run a traditional campaign. In fact, for stretches of the campaign, his strategists seemed more interested in mobilizing followers to keep conspiracy theorists online than actually winning votes in Arizona. Arpaio, whom Trump pardoned shortly after a federal judge held the former sheriff in contempt, might have helped dilute the far-right vote with Ward and helped McSally across the finish line.

In fact, such a strong hard-right showing failed to win the nomination but sent a signal to Arizona Gov. Doug Ducey, who has the power to name McCain’s successor until a new election can be held in 2020. Ducey faced an unsuccessful primary challenge from a former state official who sued for then-President Barack Obama’s birth certificate and tried to make the Senate appointment into an election issue. While the votes are still coming it, it’s possible that McSally wins the nomination with only a plurality and not a majority, something that will weigh on Ducey.

Ducey says he will not name a McCain successor until after McCain is buried at the U.S. Naval Academy. Those who are close to Ducey say he will wait to run his choice past the McCain family as a courtesy, meaning it’s highly unlikely Ward will be in the running.

Senate Majority Leader Mitch McConnell is urging Ducey to name someone to the seat who will run in 2020 and discouraging him from naming someone who will serve as placeholder. McConnell, a shrewd tactician, understands Arizona’s fading deep-red standing as more people move into the state and shift its politics.

Arizona Republicans are split about this strategy. Some party insiders are urging Ducey to name former Sen. Jon Kyl to the seat. Others are urging Ducey to consider former state legislator Kirk Adams, currently a top Ducey aide, or Barbara Barrett, a former diplomat in the George W. Bush Administration and respected business executive.

But, for the moment, Arizona Republicans were enjoying a brief moment of success. While the state GOP remained officially neutral, most of its strategists were preparing to plug into the McSally campaign. Now, the state’s political machine — one unofficially run as part of the McCain orbit and largely untouched by pro-Trump forces — will prepare for what is expected to be a challenging race against Sinema.

Wasting no time, McSally quickly turned to the general election. “It’s a choice between a doer and a talker. Between a patriot and a protester,” McSally said. “I’m not a talker, I’m a doer. I’m an aviator, not a bloviator.”

And, for good measure so the President will take notice, she tried a little Trump-style branding of her own. “Hollywood Sinema” doesn’t roll of the tongue like “Little Marco” or “Crooked Hillary,” but it is a signal to the White House that McSally has completed her embrace of Trump and wouldn’t mind it now if the President returned the favor. 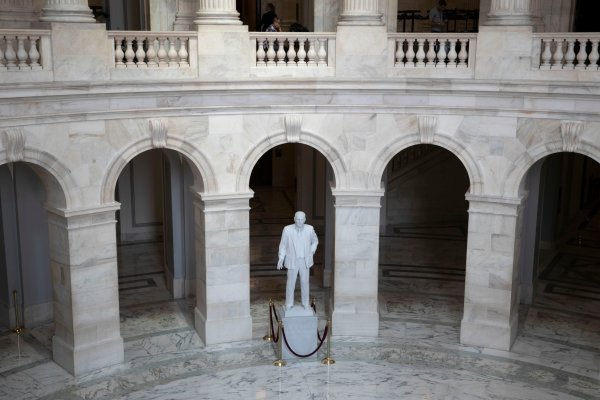 Why Senate May Not Rename Building for John McCain
Next Up: Editor's Pick