'He Was Not Cheated.' Lindsey Graham Shares His Last Conversation With John McCain

Following the death of his close friend and colleague Sen. John McCain, Sen. Lindsey Graham shared some of the late senator’s final words to him and elaborated on McCain’s legacy.

“He had a romantic view of our nation to his last breath,” Graham told NBC’s TODAY Tuesday morning. “Literally almost the last thing he said to me was ‘I love you. I have not been cheated.’ He was not cheated.”

Speaking to McCain’s legacy, Graham said the late senator showed politicians like himself and Americans “that it’s not about you.”

“Country first means that even if it’s inconvenient for you and it makes you uncomfortable, you do it anyway,” Graham said. “Country first hurts, but it’s the right way to go.”

Graham and McCain were two good friends who worked alongside each other in the Senate for more than 15 years. The two Republicans disagreed with each other on certain issues — memorably the Republican attempt to repeal the Affordable Care Act last year — but emphasized that their political differences did not come in the way of their friendship. Graham explained on TODAY that McCain’s desk “is right by mine,” making it difficult for him to look over after the late senator’s death.

Graham will speak on the Senate floor Tuesday about McCain and his legacy. He told TODAY hosts Savannah Guthrie and Craig Melvin that he plans to approach the difficult speech as he would an “after action report” in the military.

McCain had a tumultuous relationship with President Donald Trump, whom Graham has defended in recent months. Trump released an official statement on the death of the late senator two days after his death, and the White House re-lowered its flags to half-staff amid pubic pressure to keep them there until McCain’s burial.

Graham hesitated to criticize the President when asked about the kerfuffle. “It is all over now. The flag is down,” Graham said. “When the President mentioned John, he got applause. I hope he’ll remember how people feel about John.”

“Clearly they had a tenuous relationship,” Graham said, “but he’s not the only one to have a tense relationship with John McCain.”

Funeral services for McCain will begin this week. He will first lie in the Arizona State Capitol for a ceremony Wednesday (which would have been his birthday). Then he will lie in state at the U.S. Capitol on Friday. Services will take place around Washington, D.C., on Saturday.

The original version of this story misstated Lindsey Graham’s comments about John McCain. Graham said McCain was the “conscience” of the Senate and the nation, not the “conscious.” 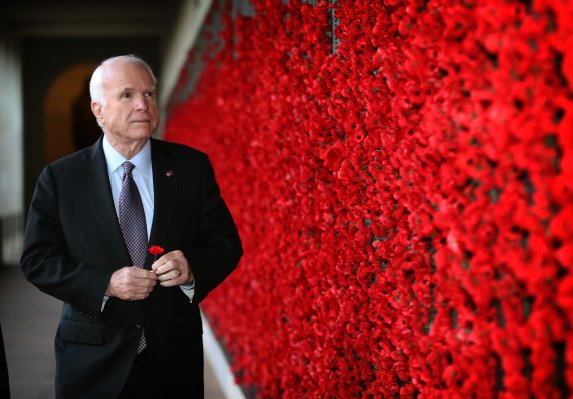 'Do Not Despair.' Read John McCain's Farewell Letter
Next Up: Editor's Pick