'Do Not Despair of Our Present Difficulties.' Read John McCain's Powerful Farewell Letter

In a final letter written before his death, the late Arizona Sen. John McCain said he had enjoyed “experiences, adventures and friendships enough for 10 satisfying lives” and urged Americans not to “despair of our present difficulties.”

“‘Fellow Americans’ — that association has meant more to me than any other,” McCain wrote. “I lived and died a proud American. We are citizens of the world’s greatest republic, a nation of ideals, not blood and soil. We are blessed and are a blessing to humanity when we uphold and advance those ideals at home and in the world.”

Family spokesperson Rick Davis, McCain’s former presidential campaign manager, choked up as he read the letter aloud at a press conference on Monday.

McCain made veiled references to the policies of President Donald Trump, who frequently feuded with McCain and caused a stir Monday for flying the White House flags at full staff.

“We weaken our greatness when we confuse our patriotism with tribal rivalries that have sown resentment and hatred and violence in all the corners of the globe,” McCain wrote. “We weaken it when we hide behind walls, rather than tear them down, when we doubt the power of our ideals, rather than trust them to be the great force for change they have always been. We are 325 million opinionated, vociferous individuals. We argue and compete and sometimes even vilify each other in our raucous public debates. But we have always had so much more in common with each other than in disagreement.”

McCain also referenced his 2008 presidential election loss to President Barack Obama, who is scheduled to speak at a funeral service for McCain at the National Cathedral this week.

“Ten years ago, I had the privilege to concede defeat in the election for President. I want to end my farewell to you with the heartfelt faith in Americans that I felt so powerfully that evening. I feel it powerfully still,” McCain wrote. “Do not despair of our present difficulties but believe always in the promise and greatness of America, because nothing is inevitable here. Americans never quit. We never surrender. We never hide from history. We make history. Farewell, fellow Americans. God bless you, and God bless America.”

Read McCain’s complete farewell letter, which was released by his office: 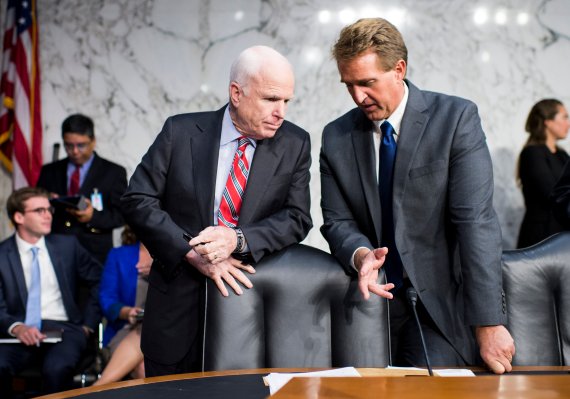 Jeff Flake Says 'It's Tough To Imagine Politics' Without John McCain
Next Up: Editor's Pick