President Donald Trump gathered reporters in the Oval Office Monday to make a dramatic-sounding announcement: He was going to end the North American Free Trade Agreement and replace it with a bilateral deal his Administration had negotiated with Mexico.

“It’s a big day for trade,” said Trump. “They used to call it NAFTA. We’re going to call it the United States-Mexico trade agreement.”

But Trump’s claim was met with immediate pushback from the president of Mexico, who had been patched into the makeshift press conference by speakerphone. Speaking through a translator, President Enrique Peña Nieto continued to refer to the landmark agreement using the Spanish abbreviation for NAFTA and undercut the claim of a bilateral agreement.

“It is our wish, Mr. President, that now Canada will also be able to be incorporated in all this,” he said on the phone.

The president’s own staff then also undercut the message. Sitting in the Oval Office, U.S. Trade Representative Robert Lighthizer to ask when the deal would be signed. Lighthizer noted that any signing would be delayed until Congress was informed and a 90-day waiting period passed. “I will terminate the existing deal,” Trump replied. “When that happens I can’t quite tell you. It depends on what the timetable is with Congress.”

Trump has long had a reputation for overpromising on his business deals, and his record as president includes similarly dramatic claims on things like denuclearizing the Korean peninsula which remain to be completed. But as the Oval Office pushback showed, there are more reasons than usual to be skeptical of Trump’s sales pitch on the new free trade agreement.

The first tipoff was the theatrics, which were rushed even by Trump’s looser standards. Trump and his Mexican counterpart were not talking face-to-face as might be expected for a momentous trade announcement, but rather by speakerphone, which led to a briefly comical moment when Trump couldn’t get him on the line at first.

The second is the timing. The announcement came after more than a year of NAFTA negotiations between the U.S., Canada and Mexico, as Trump faces looming midterm elections in which he is aiming to reassure farmers and others in his base that his aggressive trade policy is getting results. Canada and Mexico are the U.S.’s second- and third-biggest trading partners, respectively, and an important destination for U.S. exports.

Trump said Monday that he hopes Canada will join the deal by Friday, a move which seemed intended to bring Canada, to the table quickly and limit the country’s ability to press its own concerns. But a senior Administration official insisted that wasn’t the case on a conference call with journalists.

“This wasn’t designed to put pressure on anyone or anything like that,” he said. “This is a normal, orderly way to arrive at an agreement with three people.”

Canadian Foreign Affairs Minister Chrystia Freeland is due to arrive in Washington D.C. Tuesday, and described the news as “encouraging” in a statement. But the country has in the past insisted that it would not be bullied into accepting a deal without working through its areas of concern and it seems likely the Friday deadline will pass without a new agreement in place.

The Administration says it will proceed with the new deal regardless of what happens with Canada, but that promise could run up against several roadblocks. In the past, Mexico has insisted that any NAFTA deal be trilateral, and Peña Nieto seemed to suggest a similar vein of thinking Monday, repeatedly telling Trump that he wanted Canada to be a part of the new deal. Asked about whether Mexico would be willing to sign a deal without Canada, a senior Administration official demurred, offering arguments for why the country might want to without saying that it would.

“For more clarity, maybe ask the Mexicans,” the official said.

Moreover, revising NAFTA would require Congressional approval and Congress might reject a deal that doesn’t include all three countries. Earlier this year, 36 Republican senators including Senate Majority Leader Mitch McConnell calling on Trump to keep the deal intact while modernizing it. Trump could try to abandon the deal without Congressional approval, but the move would likely draw legal challenges.

Perhaps more significantly, skeptics of the new deal have grounds to question whether the White House was entitled to negotiate a new trade deal in the first place. A 2015 law requires the Administration to inform Congress 90 days before beginning trade negotiations. The White House told Congress last year that it would renegotiate NAFTA, but never said it would start talks on an entirely new deal. (The Administration said Monday that it believes that it has met its legal requirement).

Regardless of Trump’s claims of reaching an entirely new trade deal, the new agreement does seem to bring the three countries much closer to a potential NAFTA rewrite more than 25 years after it took effect. The deal resolves several thorny debates between the U.S. and Mexico including how much of a car’s content needs to be made in the region to qualify for tariff exemption, the minimum wage for some autoworkers and how to treat Mexico’s energy sector, which was closed to U.S. investment when NAFTA was first drafted.

Trump may yet get Canada and Mexico to agree to a new deal, but the announcement Monday was part of the process, not, as Trump seemed to suggest, the end result. 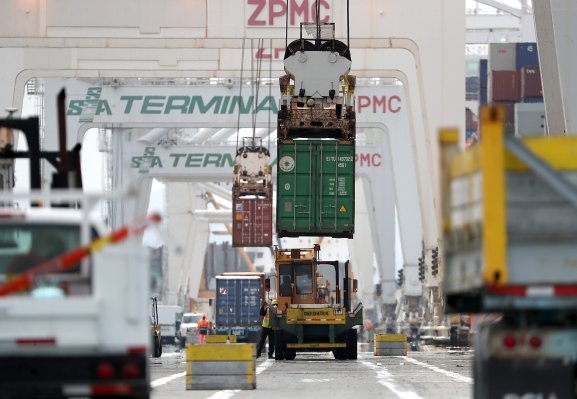 U.S. Considers Even Higher Tariffs for Chinese Goods
Next Up: Editor's Pick