These Are the Victims of the Jacksonville Madden Tournament Shooting

One was a championship-winning video game competitor with a young son. The other was a rising competitive gaming star who was just getting started.

The Jacksonville Sheriff’s Office identified competitive video game players Elijah Clayton, 22, and Taylor Robertson, 28, as the two victims who passed away when a gunman opened fire at a live video game tournament in Jacksonville, Fla. They were known best in the gaming community by their aliases Trueboy and SpotMePlzzzz, respectively.

Police said the suspected shooter was David Katz, a 24-year-old video game competitor from Baltimore, who opened fire at The Landing shopping center in Jacksonville, where players competed in EA Sports’s Madden NFL 19 championship series. The horrific mass shooting unfolded in the middle of a game as it streamed live before abruptly ending, with audio of the shots firing and the immediate aftermath still streaming. The suspected shooter was found dead on the scene with a self-inflicted gunshot wound, police said, and 11 other people were injured as a result of the rampage. All of those injured are now in stable condition, officials said Monday.

The incident has raised concerns about security in the burgeoning e-sports industry, where players play for hefty cash prizes and have become increasing popular. Law enforcement was still investigating any possible motives for the shooting.

Electronic Arts, which includes the EA Sports division, said in a statement Monday that the deaths of Clayton and Robertson “are an inconceivable tragedy.”

“We offer our deepest sympathies to their families, to those injured and everyone affected by this,” the company said. “Many of us at EA knew Elijah and Taylor well, and their positive, competitive spirit and respect for other players were evident to everyone. They earned the admiration of all who watched them compete, and we will miss them greatly.”

Here’s what we know about the victims.

Clayton, known by the gamer handle “Trueboy,” was from Woodland Hills, Calif. Described as a “frequent face” in Madden tournaments on his EA Sports profile, Clayton had earned $51,000 from competitive matches in a video game he reportedly started playing as a toddler.

A video of the shooting that is currently being examined by investigators captured a red dot that appeared to be a laser pointer trained on a player, according to the Associated Press; the player was identified by attendees as Clayton. Moments later, the first of what would be about a dozen gunshots rung out.

In an interview last week, Clayton said it was a “blessing” to compete in the Madden Ultimate League, a 16-player live-streamed tournament with a $100,000 grand prize.

“People [at school] I’ve never met will ask me to play a game. I’ve been getting recognized more often this year,” he said last week of his rising profile in competitive esports. “There’s really nowhere to go but up, honestly.”

Robertson, 28, of Ballard, West Virginia, played under the tag “SpotMePlzzz,” and was “one of the toughest opponents in competitive Madden,” according to EA Sports, racking up $80,500 in earnings after winning last year’s Madden Classic tournament. 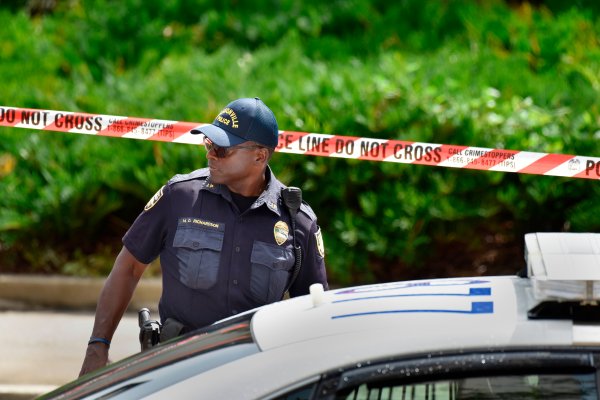 What To Know About The Suspected Jacksonville Shooter
Next Up: Editor's Pick