Two people were killed and 11 others were injured when a gunman opened fire on a live video game tournament at a mall in Jacksonville, Fla., Sunday afternoon.

The 24-year-old shooter, identified by police as David Katz of Baltimore, fired off numerous rounds during the live EA Sports’s Madden NFL 19 championship series — fatally shooting two gamers, Jacksonville Sheriff Mike Williams said at a press conference Sunday evening. Aired live on Twitch TV, a gaming network, at least 12 shots could be heard during the shooting as players competed in the gaming tournament. The video game abruptly ended moments after the first shots were heard — and the audio of its horrific aftermath continued to stream live.

The suspected shooter was found dead at the scene from a self-inflicted gunshot wound, Williams said. He was the sole shooter in the event and “clearly” was targeting competitive gamers during the attack, authorities said Monday. The suspected shooter had purchased two handguns legally in Maryland before traveling to Jacksonville for the event, law enforcement officials said.

The scene at The Landing mall was secure several hours after the shooting after SWAT teams conducted a “methodical search” inside the shopping center. Authorities originally told patrons who were hiding inside to “stay calm.”

Here’s what we know about the mass shooting in Jacksonville.

Police say three people were killed, including the suspected gunman, during the shooting.

Police responded to 911 calls of an active shooter at Chicago Pizza at 1:34 p.m. and were on the scene within two minutes, Williams said.

Nine victims were transported to local area hospitals, and two other victims transported themselves to the hospital, police said. All 11 victims are currently in stable condition, Williams said.

The victims were identified on Monday as Elijah Clayton, 22, and Taylor Robertson, 28, both competitive video game players.

CompLexity Gaming, a professional gaming team sponsoring one of the players in the tournament, tweeted that he was grazed by a bullet. The player Drini Gjoka tweeted that he was “lucky” and that his thumb was hit by a bullet. “Worst day of my life,” Gjoka tweeted Sunday afternoon. “I will never take anything for granted ever again,” he added in a later tweet. “Life can be cut short in a second.”

In a tweet, Sujeil Lopez said her son, Larry, was shot three times. He is a professional player with Bucks Gaming.

A representative from GLHF Game Bar, where the event was held, said in a Facebook message to TIME that all staff members at the bar were “safe” and “not harmed.”

Shooting suspect dead at the scene

Authorities believe the “single suspect” in the shooting is David Katz, a 24-year-old white male from Baltimore, Md. who was found dead on the scene of a self-inflicted gunshot wound. In the immediate aftermath of the shooting, police worked to confirm that there weren’t any other suspects.

Police have not commented on Katz’s possible motive, though they did confirm he was a gamer in the Madden competition who stayed at a hotel Saturday night, Williams said. Last year, Katz won a Madden tournament round in Buffalo, N.Y.

Authorities said the suspected shooter had two handguns on his body during the attack, and officials believe he only used one to shoot. He purchased the guns within the last month legally from a licensed dealer in Maryland, FBI officials said Monday.

Read more: What To Know About The Suspected Jacksonville Shooter

A video of the incident showed a red, laser-like dot appearing on the chest of one player. Williams said Monday that the suspected shooter had a laser attached to the trigger of one of his guns.

According to Maryland court records, David Katz had been hospitalized for mental illness as an adolescent, the Associated Press reported Monday. Katz was hospitalized twice in 2007, and prescribed anti-psychotic and antidepressant medications, according to court transcripts from his parents’ divorce filings, which also portrayed the adolescent as an obsessive consumer of video games.

Moments after a red dot appeared on the chest of one of the games’ players, the first shots were heard. Audio of the shooting and its immediate aftermath streamed live as viewers tuned in to the gaming tournament, painting a horrific scene as chaos unfolded in gunshots and screams of pain.

“What is he shooting with?” one person could be heard saying between shots.

Ryen Aleman, who traveled from Texas to play in the tournament, told CNN he was watching a game when he first heard gunfire. He crouched to the floor and crawled to the bathroom as others started running, he said.

“As I was going in the restroom, I stayed in there, and I just heard — there was just so many gunshots, at least 20 of them at the most,” Aleman told CNN.

Police said there were three people dead at the scene, along with the suspect, and authorities worked to transport victims to local hospitals for treatment. WJXT, a local TV station, reported that several people were taken away from the shopping mall in stretchers.

Florida politicians confirmed that federal agencies including the Federal Bureau of Investigations (FBI) and Bureau of Alcohol, Tobacco, Firearms and Explosives (ATF) were working alongside local authorities to respond to the shooting. White House spokeswoman Sarah Huckabee Sanders said President Donald Trump has been briefed on the attack and is monitoring the situation, according to AP. The White House has not yet released a statement.

In a tweet, Florida Senator Marco Rubio referred to the “horrible news” of the incident and advised those nearby to “avoid the area.”

At a press conference Sunday evening, Jacksonville Mayor Lenny Curry called mass shootings like that at the Landing “all too common.”

“Today, this evening, and tonight, Jacksonville is mourning,” Curry told reporters. “It will require us to do the hard work of [maintaining] public safety to make sure our people are safe.”

Florida Gov. Rick Scott met with representatives from the Jacksonville Fire and Rescue department, who he hailed in a tweet as “heroes” who “work every day to help others, we cannot thank them enough. In a previous statement, Scott offered the Jacksonville Sheriff’s Office “any state resources” needed for law enforcement efforts.

Rep. John Rutherford, a Republican who represents the Florida district that includes most of Jacksonville, tweeted that he was “horrified by what has transpired at The Landing” and told his constituents to listen to authorities.

EA Sports, the video game giant, said it was “devastated by this horrific event” in a statement released on Twitter.

“The tragic situation that occurred Sunday in Jacksonville was a senseless act of violence that we strongly condemn,” EA said in the statement. “Our most heartfelt sympathies go out to the families of the victims whose lives were taken today and those who were injured.”

The Jacksonville gaming event is part of the “Madden NFL 19 Championship Series” from EA Sports, the NFL and ESPN. Players were competing Sunday in a qualifying round to move onto the Round of 16 held in Las Vegas, Nevada, in October. 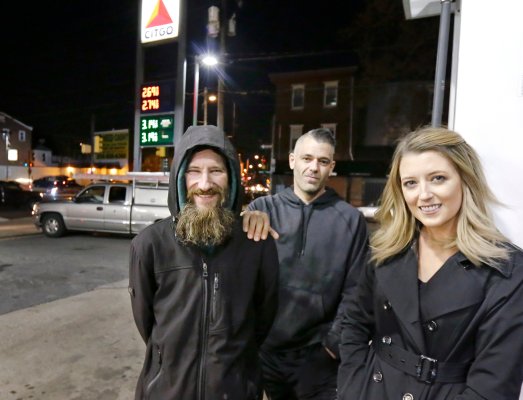 Homeless Veteran Says He's Back on The Streets After Couple Withholds Funds Raised Through Viral GoFundMe
Next Up: Editor's Pick