Both McCain and Kennedy — two political adversaries who managed to maintain a close personal friendship — died of glioblastoma, a severe and incurable form of cancer that occurs in the brain or spinal cord. McCain’s diagnosis in July 2017 immediately drew comparisons to Kennedy’s, in part because of the rapport the two men shared.

“As soon as we stopped our speech making, he’d come over and put his arm around you and — and make everybody appreciate that we had our differences politically, but personally, we could be friends and work together as colleagues and friends for the good of the country,” McCain told CNN after Kennedy’s death on August 25, 2009, WCVB reports.

McCain, who died just a few days short of his 82nd birthday, decided to cease treatment for his cancer last Friday. Like McCain, Kennedy also lived for about a year after his diagnosis, dying at age 77. The American Brain Tumor Association says median survival is 14.6 months.

Glioblastoma, which originates in the brain and typically does not spread to other parts of the body, is a particularly difficult cancer to treat. Because tumors often overlap with healthy brain tissue, full surgical removal is usually impossible, according to the Mayo Clinic. Treatments such as chemotherapy and radiation may slow the disease’s progression, but there is currently no cure.

“John McCain will cast a long shadow,” Biden wrote. “His impact on America hasn’t ended. Not even close.” 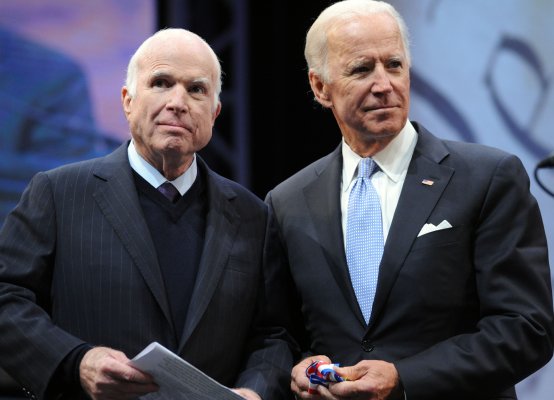