(Bloomberg) — Elon Musk scrapped his plan to take Tesla Inc. private, a remarkable reversal more than two weeks after blindsiding employees and investors with the idea in a bombshell tweet.

In a blog post published late Friday, Tesla’s chairman, CEO and largest shareholder said he had met with the board and “let them know that I believe the better path is for Tesla to remain public. The Board indicated that they agree.”

The about-face ends speculation about how Musk would raise money to take Tesla private, but it’s unlikely to ward off scrutiny of the maverick CEO’s actions. Musk’s Aug. 7 tweet that he wanted to take the electric-car maker private at $420 a share and had “funding secured” sent the shares soaring before it became apparent he didn’t have financing lined up.

The episode led to a subpoena from the U.S. Securities and Exchange Commission, according to a person familiar with the matter. Musk’s behavior, including a tearful interview with the New York Times that touched on his lack of sleep, has led to calls for Tesla to hire a chief operating officer to help reduce stress on the CEO. Musk, who also runs the rocket-launching company SpaceX and a tunnel-drilling outfit called the Boring Co., is busy trying to ramp up Tesla’s production of the Model 3 sedan and make the company profitable in the second half of the year.

In an Aug. 13 blog post, Musk indicated that he believed based on conversations with Saudi Arabia’s Public Investment Fund that he had financial support to go private. In his blog post Friday, Musk reiterated his “belief that there is more than enough funding to take Tesla private” but said a transaction would be distracting and take too long.

“Given the feedback I’ve received, it’s apparent that most of Tesla’s existing shareholders believe we are better off as a public company,” wrote Musk. “Although the majority of shareholders I spoke to said they would remain with Tesla if we went private, the sentiment, in a nutshell, was ‘please don’t do this.’”

In a later tweet, he added: “In talking to our public investors, most were supportive of optimizing for long-term value creation over quarterly earnings. This was also a factor in remaining public.”

Musk declined to comment further Friday on how he arrived at his decision. He was active on Twitter late Friday, sharing updates about SpaceX and a Hyperloop pod competition.

In a separate statement, the board confirmed the decision and announced its intention to dissolve a committee of independent directors formed to review Musk’s proposal.

“We fully support Elon as he continues to lead the company moving forward,” the independent board members said.

Musk had hired both Goldman Sachs Group Inc. and Morgan Stanley, the top two merger advisers in the U.S., to advise him personally in his bid to take the company off of the public market, according to people familiar with the arrangements. Both banks have been lead underwriters on most of the company’s stock and convertible debt offerings.

“Only Elon wanted to go private,” Ross Gerber, CEO of fund manager Gerber Kawasaki and an ardent Tesla supporter, said in a tweet. “No other shareholders wanted to. We’re all holding our shares either way.”

ARK Investment Management, which holds about 0.2 percent of Tesla’s shares according to data compiled by Bloomberg, had implored Musk in an open letter this week to keep Tesla public. Going private would deprive investors of the chance to participate in its rising value, Chief Investment Officer Cathie Wood said.

“My guess is that the large institutional investors said to Elon ‘this all sounds a little half-baked’,” Stephen Diamond, an associate professor of law at Santa Clara University who specializes in corporate governance, said in a phone interview late Friday. “The board called his bluff. The clock was ticking on the class period of all of these shareholder lawsuits. Hiring Goldman Sachs and Morgan Stanley gave Musk cover, but they had to cut off the damage and end the charade.” 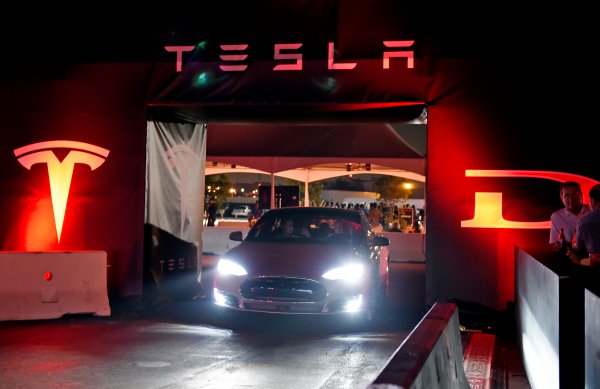