Operation Finale Shows the Capture of Nazi Adolf Eichmann. But What Happened at His Trial Changed History, Too

Nazi Adolf Eichmann standing in prisoner's cage during reading of indictment against him at his trial for war crimes, in 1961.
Gjon Mili—The LIFE Picture Collection/Getty Images
By Lily Rothman

When Nazi leader Adolf Eichmann escaped from the Allied forces that had captured him after World War II, he disappeared and was presumed dead by some — but Israel’s first Prime Minister David Ben-Gurion swore he would be made to account for his crimes, as other Nazis had at the Nuremberg Trials of the 1940s.

The story of how Eichmann was apprehended in Argentina in May of 1960 is the subject of the new movie Operation Finale. But the capture was, in many ways, only one part of the historical importance of that story. What happened next, though largely outside the scope of the film, would raise new questions about the very meaning of concepts such as justice, evil and guilt.

As TIME reported immediately after the capture, the idea that Eichmann would stand trial in Israel was controversial, as “diplomats and editorialists around the world asked about the legality of kidnapping a man from one country to stand trial in a second for crimes committed in a third,” and Argentina dealt with a situation under which its “sovereignty was infringed and [its] laws against abduction were flouted.”

Some observers felt that Eichmann should be tried in Germany, if anywhere, or by an international body. Some felt that the importance of the still-new nation of Israel being a beacon of adherence to international law meant the precedent for such a trial was too shaky to rely on. Some felt that the nation might be justified in trying Eichmann, but should not get into the business of executions. Some felt the most important thing was to serve Eichmann himself with justice, or something approaching justice, recognizing that no punishment could be harsh enough. Some felt it was most important to present the facts of what he did to the world, and preserve them for the historical record.

Many, however, remembered what Eichmann had done and decided his crimes outweighed the concerns.

“I don’t think the [legality] controversy lingered,” says Neal Bascomb, author of Hunting Eichmann: How a Band of Survivors and a Young Spy Agency Chased Down the World’s Most Notorious Nazi. “A lot of the controversy was face-saving, particularly from the German and Argentinian point of view.”

Few, if any, argued that there was any actual question of what Eichmann had done; he was known to have been an architect of the Nazi genocide and was even once reported to have said that he gained “extraordinary satisfaction” from knowing that he had millions of death on his conscience. His guilt would not be determined by establishing the facts, but by establishing the meaning of that idea.

An estimated 500 journalists from around the world headed to Jerusalem to cover the trial. According to TIME’s account, this is what they saw: “a thin, balding man of 55 who looked more like a bank clerk than a butcher: a thin mouth between protruding ears, a long, narrow nose, deep set blue eyes, a high, often wrinkled brow. He looked puny beside two burly, blue-clad Israeli policemen. When he stood, he resembled a stork more than a soldier.”

Eichmann tried to make the case that he had “never killed anybody” or given an order for a killing, and was only, as he put it, “loyal, obedient and happy to be of service to my fatherland.” Such service, however, included moments such as the infamous instance in which he attempted to “sell” a million Jewish lives in exchange for 10,000 trucks, and another in which he insisted that if he had to kill himself at the end of the war he would “leap into my grave happy because we will at least have wiped out Europe’s Jews.” Counter to Eichmann’s argument ran hours upon hours of testimony from the prosecutor and the many witnesses he called, as well as affidavits from former Nazis who said Eichmann had in fact been a decision-maker of consequence.

When Eichmann took the stand in late June, here’s how TIME covered his appearance:

When the trial came to an end, nearly two years had passed since Eichmann’s apprehension. In late 1961, the court reassembled to hear the verdict. His argument that he had merely been following orders proved unconvincing. Eichmann was guilty.

“Citing legal authorities in six languages,” TIME reported, “ranging in time from Hugo Grotius in 1625 to the United Nations genocide convention in 1948, the court sought to establish Israel’s jurisdiction over Eichmann; although the Israeli state did not exist when the crimes were committed, the judges argued that Israel now represents all Jews. ‘The people is one and the crime is one,’ they said. ‘To argue that there is no connection is like cutting away a tree root and branch and saying to its trunk: I have not hurt you.’”

Eichmann’s appeals were denied, and his request for clemency was turned down. He was executed in 1962 by hanging. His ashes were dumped at sea.

And, Bascomb believes, by that point the trial had achieved its real aims.

“The purpose of catching Eichmann was clear from the beginning — one, to remind the world what the Germans did to the Jews, and two, to remind Israeli youth why the state of Israel needs to exist,” he says, adding that those arguments were particularly embraced by Ben-Gurion. “The whole purpose and execution of the trial was to that end, and it was quite successful.”

The number of books published and the amount of research done about the Holocaust increased notably after the trial, Bascomb says, as it was a major motivator for the world to examine what had happened, and why and how. As he sees it, the Eichmann trial was the end of the era of sweeping the Holocaust under the rug and the beginning of a new phase, marked by the exhortation to never forget — an idea that still governs Holocaust education. “This is the turning point,” he says. “It was definitely a watershed moment.”

The following year, philosopher Hannah Arendt published her seminal work Eichmann in Jerusalem: A Report on the Banality of Evil, which used Eichmann’s argument that he had only been following orders to examine the nature of responsibility and evil. If any controversy still surrounds the trial, Bascomb says, it’s whether Arendt got it right: many scholars to believe that even if her theory was insightful, Eichmann himself was hardly banal in his evil.

In the end, though Eichmann’s trial had perhaps raised as many questions as it answered, the story of the trial became a key part of the history of the Holocaust and its reverberations across the decades that followed, even up to today. It was as one TIME reader put it in a letter responding to the coverage of the trial: “Eichmann is the symbol of an era, a dread precedent.”

“The trial’s purpose was to put the Holocaust on trial,” Bascomb says, echoing that idea. “And Eichmann was a tool to that end.” 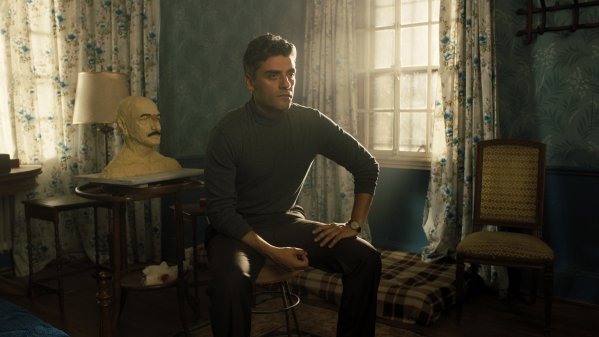 The True Story Behind the Movie Operation Finale
Next Up: Editor's Pick