Why Bill Clinton Deserved to Be Impeached but President Trump Doesn't, According to Newt Gingrich

The fallout from Tuesday’s federal court proceedings involving two of Donald Trump’s former top associates seemed to spell trouble for the President. But his supporters don’t see it that way.

Former Trump lawyer Michael Cohen’s guilty plea and ex–Trump campaign manager Paul Manafort’s conviction sparked questions among some pundits and activists about impeachment, a prospect that remains far-fetched based on the current makeup of Congress. Some experts argue that Cohen’s plea, which he directly connected to his work for the President’s campaign, could become a legal argument for impeachment.

“The elites in Washington get tremendously excited about things which are totally irrelevant to normal people,” Gingrich tells TIME in an interview the day after the Cohen plea and the Manafort verdict. “They’re just background noise that people pay no attention to.” He defends Kenneth Starr’s independent investigation into Clinton, but now calls Special Counsel Robert Mueller’s investigation a “witch hunt,” a phrase Trump has often used.

In 1998, Gingrich accused Clinton of degrading the presidency through the Monica Lewinsky investigation. “This has nothing to do with vendettas or witch-hunts or partisan advantage,” Gingrich said at the time. “This is very simply about the rule of law, and the survival of the American system of justice. This is what the Constitution demands, and what Richard Nixon had to resign over.”

Clinton was impeached later that year, in a vote largely along party lines, on charges of perjury and obstruction of justice. The proceedings grew to focus too heavily on “salacious details,” Gingrich says now. Clinton was subsequently acquitted by the Senate — an outcome that Gingrich now considers appropriate. “It probably was the right result,” he says. “[Clinton] was primarily defined in history as an impeached president, which he deserved. And he did lose his right to practice law. He had to pay a big penalty, and people generally agree what he did was wrong. But on the other hand, it probably didn’t rise to the level of replacing the president of the United States.”

Gingrich does not think the Constitution “demands” similar action when it comes to Trump. “The argument of our whole case was that [Clinton], as governor, had imposed his will on a state employee and then committed perjury by lying about it. Now, perjury is a felony, and the question is: Is anybody about to suggest that Donald Trump has done something comparable? Federal election law rules don’t quite rise to the same level as exploiting his own employee,” he says. “Which one would you rank higher in dubiousness? That’s the problem the Democrats have.”

Trump, who has also been accused of sexual misconduct by multiple women, was implicated in a felony when Cohen pleaded guilty Tuesday to fraud and campaign finance violations. Cohen said he arranged payments to women to keep them quiet about alleged affairs with Trump and did so “in coordination with and at the direction of a candidate for federal office.”

Trump has denied any wrongdoing. “Just because Michael Cohen made a plea deal doesn’t mean that that implicates the President on anything,” White House Press Secretary Sarah Huckabee Sanders said at a press briefing Wednesday.

“The idea of an impeachment is frankly a sad attempt by Democrats,” Sanders added.

However, Democratic leaders remain unwilling to call for impeachment. House Minority Leader Nancy Pelosi told the Associated Press on Wednesday that impeaching Trump was still “not a priority” for Democrats and said Mueller should be left to conclude his investigation. “Impeachment has to spring from something else,” she said. “It’s not a priority on the agenda going forward unless something else comes forward.”

Even if Democrats win control of Congress in the midterms, removing a president from office requires a two-thirds vote in the Senate, which means the effort would need some Republican support. That’s why Princeton professor Keith Whittington, who studies impeachment, does not think Trump’s latest legal troubles increase the likelihood of impeachment.

“I just find it a little implausible that the President’s own partisans are going to be motivated by a campaign finance violation to think that that’s sufficient rationale to remove a president from office,” Whittington says.

Gingrich thinks of it in terms of the public perception of the chief executive. “President Trump is 80% a historic figure, and 20% a reality TV personality,” he says, “and when you get that, you understand what’s going on. And the country — a majority of the country in the next election — will accept that equation.”

Gingrich notes that impeachment can quickly become unpopular, as it did during the Clinton proceedings, when public opinion of Republicans fell, while Democrats and Clinton experienced a surge.

There is little doubt impeachment of Trump would be divisive — perhaps more divisive than impeaching Nixon would have been. Recent polls show that Republicans are far more likely oppose impeachment, view Mueller unfavorably, and see Cohen as “not honest and trustworthy.”

“The Trump base has concluded that he’s achieving real things,” Gingrich says, “and the rest of this is noise.” 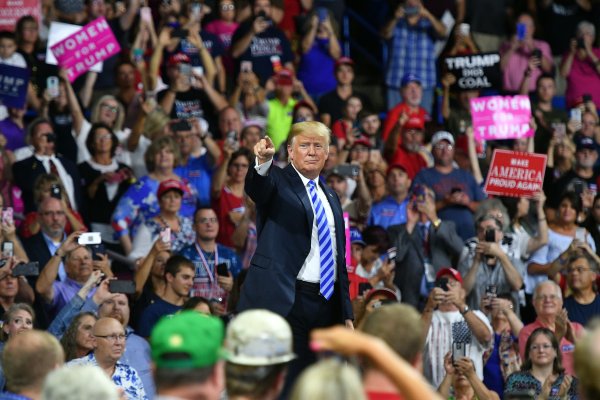 The Crowd Chanted 'Lock Her Up.' President Trump Didn't Mention His Own Team's Legal Troubles
Next Up: Editor's Pick