Annan, former U.N. Secretary-General, pictured on Feb. 28, 2013
Anoush Abrar—13 Photo/Redux
Ideas
By Desmond Tutu
Tutu is a cleric and human-rights activist and preceded Annan as chairman of the Elders

Kofi Annan’s deep well of grace, humility and calm energy set him apart. Such was his seemingly boundless vigor and the gravitas he exuded, that his death, at the age of 80 on Aug. 18, shocked all who knew and loved him.

A career diplomat originally from Ghana, Annan led the U.N. from 1997 to 2006, one of the most difficult periods in its history. He crisscrossed the world in an effort to bridge divides after the Sept. 11, 2001, attacks. One can only imagine the pressure he was under, yet it never affected his demeanor.

After he retired from the U.N., his peacemaking continued through the efforts of his foundation and, later, as chairman of the Elders, an independent global leaders’ group. He understood on a visceral level that true peace resides within us all; that justice and human rights are not far-flung concepts for war-torn countries, but reside in our homes and our communities; and that child marriage is as abhorrent as bombmaking.

Over the years I came to regard Annan as a wiser, younger brother. Five years ago in Cape Town, he spoke of the need for societies to “embrace diversity as a source of strength.” The fact that Annan was a product of Africa did us especially proud, but he could not be defined by his Africanness. He embodied the global citizen. For him, there was no them, no other–just us. 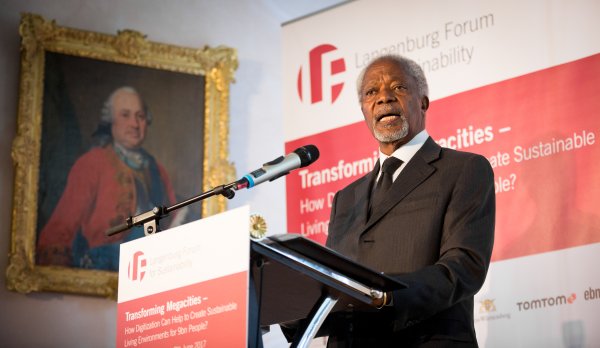 World Leaders Celebrate the Life of Kofi Annan
Next Up: Editor's Pick