Greece Enters Post-Bailout Era, But Has Little Else to Cheer

A man stands at an ATM in Athens. On Aug. 20, the last bailout program for Greece came to an end
Socrates Baltagiannis—Picture-Alliance/DPA/AP
By Billy Perrigo

After eight years of Austerity and European financial support, Greece officially exited its third bailout program on Aug. 20. For the first time since 2010, the country can “stand on its own,” according to the chair of the euro-zone bailout fund. “This is a day of liberation,” said Greek Prime Minister Alexis Tsipras, emphasizing that Greece must not forget the lessons of the crisis. But after years of political and social upheaval, starting afresh isn’t so easy.

The global financial crisis of 2007–08 hit Greece hard. In 2010, the country revealed that it was running a deficit of over 14%, rather than the 4% it had misreported. Lenders’ confidence plummeted. With creditors unwilling to keep the country ticking, Greece was forced to request emergency loans from the E.U., the European Central Bank and the IMF. Those bailouts amounted to some $360 billion–the largest financial assistance package in history–and came with the condition that Greece would reduce welfare spending, embark on privatization and increase taxes.

As Greece tried to prevent itself from falling into bankruptcy, its citizens suffered. The economy has shrunk by more than a quarter since 2010, and unemployment–which hit 28% at the peak of the crisis–is still at 20% (the euro-zone average is 8%). Youth unemployment is about 40%, and many jobs are temporary or low-paying.

Greece’s reliance on bailout money is over, and its economy grew 1.4% last year. But it now faces the challenge of paying back its loans. The conditions imposed by creditors aren’t over yet: they require that Greece run a budget surplus of 3.5% of GDP until 2022, and then an average of 2.2% until 2060. So the government has been forced to raise taxes yet again. Some analysts fear this will stifle growth and risk pushing Greece back into crisis. Tsipras has promised “prudence and responsibility.” Despite pressure to improve the lives of ordinary Greeks, they’re unlikely to see improvements anytime soon. 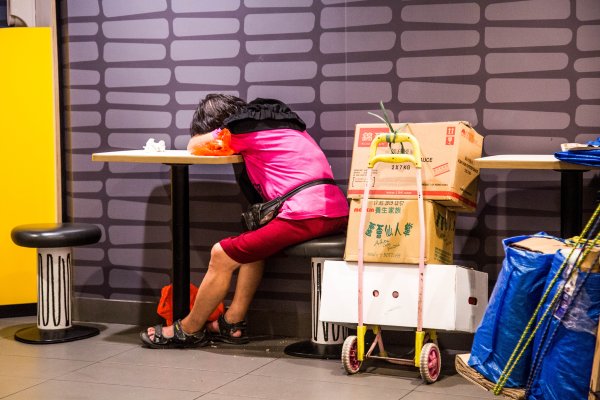 Hong Kong's Homes Are so Small Hundreds Would Rather Sleep in McDonald's
Next Up: Editor's Pick