Aerosmith lead singer Steven Tyler has, for the third time, asked President Trump to stop using his songs during rallies.

The Aerosmith song “Livin’ on the Edge” played at a Trump rally in Charleston, W.Va., on Tuesday, prompting the band frontman to send a letter to the White House through his attorneys.

“Mr. Trump does not have our client’s permission to use any of our client’s music, including ‘Livin’ on the Edge,'” says the cease and desist letter.

It’s not the first time such a skirmish has come up between Tyler and Trump. The president was twice asked in 2015 not to use Aerosmith’s “Dream On” during his campaign.

“As we have made clear numerous times, Mr. Trump is creating the false impression that our client has given his consent for the use of his music, and even that he endorses the presidency of Mr. Trump,” the letter says. “By using ‘Livin’ On The Edge’ without our client’s permission, Mr. Trump is falsely implying that our client, once again, endorses his campaign and/or his presidency, as evidenced by actual confusion seen from the reactions of our client’s fans all over social media.”

According to the letter, Trump requires Tyler’s written permission to use his music.

Tyler, using all caps, weighed in on the matter on Twitter: 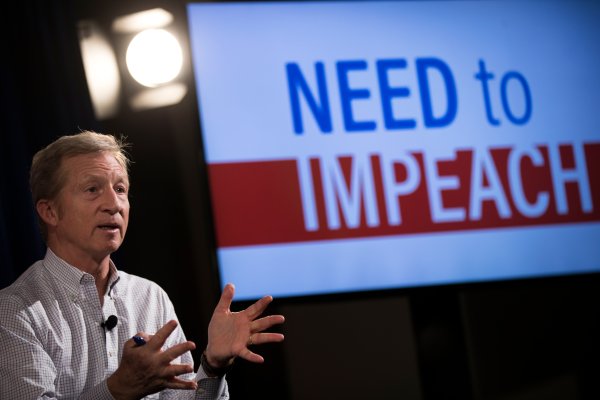 Interview: Tom Steyer on Rallying Voters to Impeach Trump
Next Up: Editor's Pick