On the evening of Aug. 15 in Institute, West Virginia — just across the Kanawha River from where President Trump delivered a high profile speech at a rally in Charleston on Tuesday—a man in his twenties named Andre Leonard was shot and killed near West Virginia State University. Authorities have since charged 30-year-old Juan Chic with the crime.

That homicide, barely 10 miles from where Trump took the stage—as well as the several hundred other killings that have occurred in the past week, usually with firearms—went unmentioned in the President’s speech and largely overlooked by national media. Instead, Trump alluded to a suspected murder a month earlier and nearly 800 miles farther away: That of University of Iowa student Mollie Tibbetts, which recently led to the arrest of a suspect who police say is an undocumented immigrant.

“You saw what happened to that incredible beautiful young woman,” Trump said. “Should have never happened. Illegally in our country.”

It is no mystery why Trump chose to mention Tibbetts’ death. Whenever an undocumented immigrant commits or is suspected of committing a violent crime, anti-immigration forces are quick to paint the incident as evidence that illegal immigration presents a mortal threat to those here legally. In his acceptance speech at the Republican National Convention in Cleveland, Trump alluded to three such cases—two involving traffic accidents—and went on to say that:

“Of all my travels in this country, nothing has affected me more, nothing even close I have to tell you, than the time I have spent with the mothers and fathers who have lost their children to violence spilling across our borders.” (Parents of the three victims addressed the convention earlier in the week.) Trump used a similar tactic in his 2018 State of the Union address.

The trumpeting of such anecdotes, as tragic as they can be, often mutes the common response from researchers and advocates: Several tomes worth of research have failed to turn up even tepid evidence that an immigrant of any legal status is more likely to commit a crime than a native-born citizen. In fact, in most cases, what data exists suggests just the opposite.

A variety of publications have done admirable jobs culling through the relevant available studies. NPR examined four studies, none of which found a positive correlation between immigration and crime. Their overview included an oft-cited report from the Cato institute, a libertarian-leaning think tank, that found undocumented immigrants in Texas were significantly less likely to be arrested or convicted for murder, sexual assault or larceny. Meanwhile, legal immigrants had the lowest rates of such crimes. (Unlike most places, Texas law enforcement records arrestees’ immigration status.)

A USA Today summary of available research also cited studies that show that the percentage of inmates who are foreign-born is significantly lower than the general inmate population. When presented with this and other concurring research by USA Today, a director at the Center for Immigration Studies, which favors lower immigration rates, countered that those numbers may be lower because many criminal immigrants are deported, but also fell back on the anecdote of an undocumented immigrant who was accused but acquitted of killing a San Francisco woman in 2015 — a story the President frequently invoked during the campaign. (The suspect was convicted of the lesser charge of being a felon in possession of a gun.)

That said, the data available to researchers is unfortunately limited at best, making their conclusions easier to ignore. Like virtually every discussion of crime in the United States, analysts inevitably hit a barrier higher than the tallest border wall imaginable: Crime data in the United States is fractured, inconsistent and easily punctured by those who are unhappy with its conclusions.

“We don’t have a crime rate, quite frankly, for citizens either,” says Susan Long, Director of the TRAC Research Center, which conducts sophisticated analyses of federal data from both immigration courts and a wide array of federal crime and law enforcement agencies. “It’s not like temperature, where you can get the same measurements across the country.”

Of course, very few matters of public policy include reliable, neatly formatted Excel files for analysts to crunch. (Even getting clean figures on how many people voted for President is far from an exact science.) But as the existing studies show, researchers have developed a variety of clever ways to get at the question of immigrant crime rates, with the overwhelming conclusion that native-born citizens are more likely to commit crimes than immigrants, not the other way around.

Even when it comes to individuals who are deported and therefore don’t enter the U.S. penal system, reports from Immigration and Customs Enforcement (ICE) tend to misrepresent the degree to which it is deporting people with criminal records. ICE’s most recent report stated that 92 percent of the 143,470 arrests it conducted in Fiscal Year 2017 involved people who experienced some form of run-in with law enforcement—a statistic the agency says “clearly demonstrate ICE’s continued commitment to identifying, arresting, and removing aliens who are in violation of U.S. law, particularly those posing a public safety or national security threat.”

But other available information suggests otherwise, as several outlets have noted. In a recent report, TRAC examined case-by-case deportation files obtained through the Freedom of Information Act and found that, of the 156,071 individuals arrested between February and October of 2017, “Half of these individuals had either never been convicted of a crime (34%), or the only conviction was for their illegal entry/reentry and not for any offense committed after they had arrived (15%). An additional 10 percent had been convicted either for driving while intoxicated (DUI) or for a simple traffic violation.”

Whenever public data is at least a little murky—which, as a data journalist, I would estimate is true about 100 percent of the time—it gives those who resist the clear implications of responsible research the wiggle room to throw up their hands and point instead to indisputably tragic anecdotes. This is the height of misdirection. We all know correlation does not equal causation. It should naturally follow that anecdotal misfortune does not either. 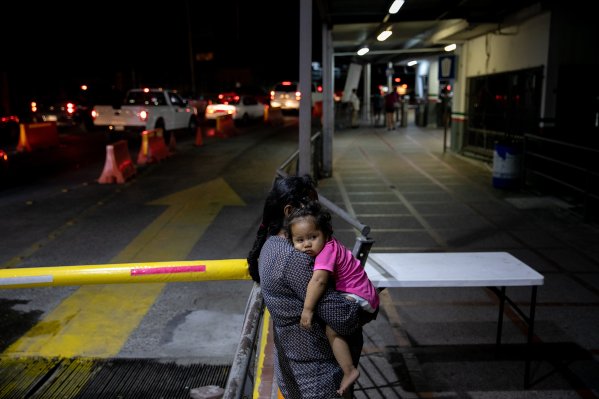 At the U.S. Border, an Invisible Wall Already Exists
Next Up: Editor's Pick