'The Moment We Met, Tears Rolled Down.' War-Torn Korean Families Describe What It Was Like to Be Reunited

It had been 68 years since Hwang Woo Seok was separated from his daughter after war broke out on the Korean Peninsula. When the pair met again for the first time Monday, the 89-year-old didn’t know what to expect. Now 71, Hwang’s daughter had a daughter of her own, and she spoke a distinct dialect after moving to a more northern province of North Korea shortly after the war. “I left when she was three, so she had no memories of me,” Hwang said.

He only received notification his daughter was alive about a month ago; he also learned that his three younger sisters had died. Over a series of five short meetings this week, Hwang, his daughter Hwang Young Sook and his granddaughter Koh Ok Hwa ate and talked together, examined photographs, and reached a fleeting familiarity before he was bussed back to his home in South Korea. “I felt she resembled my father,” Hwang told TIME a few hours after leaving his daughter, “but after looking at her mother’s picture, she takes after her mom.”

Flowing tears, joy and disbelief marked the reunion of scores of North and South Korean relatives this week, as members of 89 families came face-to-face after having been divided by war more than six decades ago. Monday, Tuesday and Wednesday’s hours-long family reunions at North Korea’s Mount Kumgang tourist resort — to be followed by a second round of reunions Friday through Sunday — are both a sign of the growing détente between Seoul and Pyongyang and a reminder of the conflict that continues to divide them.

Although the two Koreas have permitted occasional meetings between estranged family members in the past (the last was in 2015), tens of thousands of war survivors remain separated by a heavily fortified demilitarized zone, often unsure whether their relatives are dead or alive.

With the eldest South Korean at this week’s first round of reunions aged 101, the event was a poignant reminder that time is running out to bring these long-lost relatives back together. In fact, Hwang, his daughter, and granddaughter were in the minority: Only seven of the reunions scheduled to take place were between immediate family members like parents and children, according to the BBC, with the rest between more distant relatives.

Why are the reunions happening now?

Prior to this week’s reunions, 20 similar events had taken place. But it has been three years since the most recent in October 2015.

Resumption of reunions follows pledges made by South Korean President Moon Jae-in and North Korean leader Kim Jong Un during an April meeting in which they promised to usher in a “new era of peace” on the Korean peninsula. The two leaders met again in May and are expected to convene for a third inter-Korean summit in Pyongyang next month.

Read more: ‘The Korean War Is Over.’ Kim Jong Un Begins ‘Writing a New History’ as the First North Korean Leader to Visit the South

A historic June 12 meeting between Kim and U.S. President Donald Trump elicited similar reconciliatory statements, but serious doubts remain over North Korea’s willingness to denuclearize. An Aug. 20 report by U.N. watchdog the International Atomic Energy Agency said Pyongyang was continuing to develop its nuclear weapons program, and described the country’s actions and recent statements as a “cause for grave concern.”

How were people selected for this week’s reunions?

Millions of Koreans were separated by the 1950–1953 Korean War, and since the first reunion was held in 2000 more than 130,000 southerners have signed up to take part in similar events — more than half of them have reportedly died in the decades since. The South Koreans meeting relatives this week were selected by lottery from about 57,000 of the survivors.

South Korea bussed about 330 people from 89 families across the 38th parallel into the North, many of them in wheelchairs. There they met with 185 North Koreans for the three-day event facilitated by the Red Cross, Reuters reports. Originally, 93 North and South Korean families were supposed to meet over the course of the three days, but four from the south pulled out for health reasons.

Hwang tells TIME that although he received confirmation his daughter was alive on July 25, the controversy that arose around 12 North Korean waitresses that may have been forced to defect and talk that the National Assembly was reconsidering the reunions made him question whether it “was really going to take the place until the last minute.”

A further 300 Koreans and 83 North Koreans are expected to travel to Mount Kumgang for more reunions Friday, according to South Korea’s Yonhap news agency.

“It is a shame for both governments that many of the families have passed away without knowing whether their lost relatives were alive,” South Korean President Moon Jae-in told presidential secretaries. “Expanding and accelerating family reunions is a top priority among humanitarian projects to be carried out by the two Koreas.”

What happened when they met?

Most of the reunions would have been closely supervised, and family members spent a total of about 11 hours face-to-face over the course of the three days — there were group meetings, shared dinners and private reunions in hotel rooms lasting a few hours each. Three recently returned South Koreans told TIME they avoided discussing politics with their northern relatives.

Because they had either never met, or not seen each other in more than six decades, organizers assigned corresponding relatives. “There was the number 74 attached to my sister-in-law and nephew like a name tag, so I knew who they were in an instant,” says Jung Hak Soon, 81. “I was hoping my nephew would take after my brother but he didn’t resemble him at all.”

On Wednesday, the elderly South Korean visitors said their goodbyes and ate a final lunch before heading back home. They presented their northern relatives with gifts that included basic necessities like painkillers, toothpaste and underwear. Some had exchanged photographs depicting other long-lost relatives they hoped to identify. “My sister-in-law and nephew didn’t give me their phone number, now that I think of it,” says Jung. “They live in the countryside so they probably don’t even have a phone number. There’s probably no way I’ll see them again.”

Hwang also doubted he would see his daughter again. But given that he had made it to 89, hoped that she could reunite with his 50-year-old son. “The next generations can meet each other if Korea becomes unified,” he said. “So I told her, ‘Live for 20 more years.'” 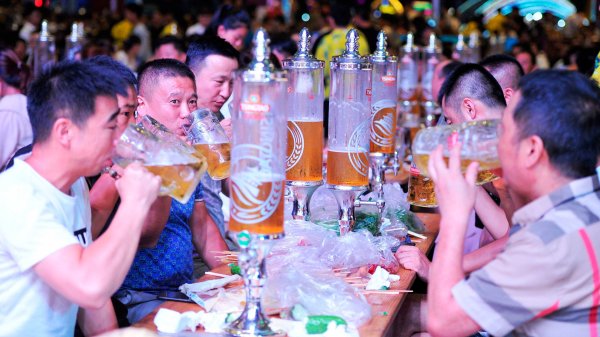 China's Qingdao Beer Festival Taps Into a Thirsty Market
Next Up: Editor's Pick