Why Deadly Alligator Attacks Like South Carolina Are a Growing Trend

The death of Cassandra Cline, a 45-year-old elementary school teacher, who was killed by a 9-foot alligator while protecting her dog on Hilton Head Island Monday made headlines around the world.

Fatal alligator attacks are rare – rare enough that they attract a lot of attention when they happen. But dangerous human-gator interactions are starting to happen more frequently because people are moving deeper into alligators’ habitat, says University of Florida professor Frank Mazzotti.

“People building homes where alligators live have caused the increase in attacks,” Mazzotti, a wildlife expert with the University of Florida’s Fort Lauderdale Research and Education Center, tells TIME.

Cline was walking her dog alongside a lagoon adjacent to the Sea Pines Resort golf course when she was attacked about 9:30 a.m. Sea Pine, a 5,200-square-foot gated community, was built in 1957 and is located at the southern tip of Hilton Head Island.

Florida, which has the most human-alligator interactions, has recorded 24 deadly alligator attacks since 1948 – but 14 of those have occurred in the last 20 years, according to Florida Fish and Wildlife Conservation Commission data. There were an average of about 10 alligator bites a year in the 2010s, compared with an average of eight a year in the 1980s.

The last reported case of a fatal alligator attack in the U.S was in June. Shizuka Matsuki, 47, was last seen walking her two dogs in South Florida before her body was found miles away in a lake in Davie, Florida. Before that, Bonnie Walker, 90, wandered off her senior living center and was killed in an attack in Charleston, South Carolina in 2016.

Despite what seems to be increasing frequency, Mazzotti says attacks are still remarkably rare, considering the number of alligators in southeastern U.S. There are an estimated 100,000 alligators in South Carolina alone.

“Alligators do not have an instinct to attack humans,” he says.

In many instances, there are several of factors that contribute to an alligator attack. Mazzotti says he believes a major factor in Cline’s death was her dog, which alligators perceive as food.

“A good comparison would be that a dog is like what a bowl of pasta or chicken is to a human, when an alligator sees a dog they see their next meal,” he says. “When nuisance trappers go into an area with gators they’ll often play a recording of a dog barking and the gators will come and investigate.”

Mazzotti says people need to be aware of their surrounding when they are near water or in areas where they have been alligator sightings.

He adds: “Don’t let your dog run free. Treat your dog like you would treat your child.”

But, there’s a caveat. If a person is in the unfortunate situation where an alligator attacks a pet, Mazzotti says it’s best not to get in the alligator’s way.

His recommendation for anyone who does get attacked by an alligator: “Fight like your life depends on it.”

“Poke the gator in the eyes and try to ram your hand down its throat,” he advises. “Alligators will often reposition its bite, take advantage of that to get away. Also make yourself appear as big as possible, the bigger you appear, the less likely the gator is to engage.” 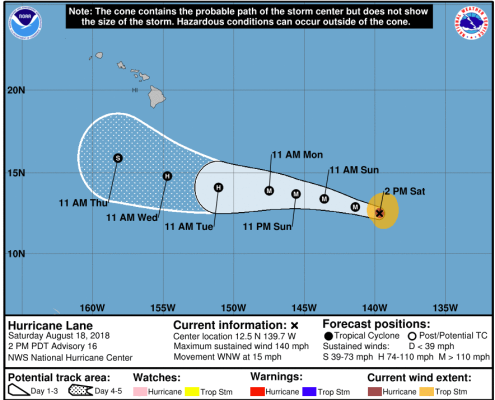 Lane Bears Down on Hawaii
Next Up: Editor's Pick