Donald Trump’s lawyer Rudy Giuliani said the 2016 meeting at Trump Tower between the then-candidate’s oldest son and a Russian lawyer with ties to the Kremlin was arranged to seek information about Democrat Hillary Clinton.

“The meeting was originally for the purpose of getting information about, about Clinton,” Giuliani said Sunday on NBC’s “Meet the Press.” “It turned out to be a meeting about another subject, and it was not pursued at all.”

Giuliani’s comment was consistent with a tweet by Trump on Aug. 5 that the gathering had been arranged to “get information on an opponent,” contradicting the previous reason given for the meeting. He didn’t mention Clinton by name.

Like Trump, who characterized the meeting as “totally legal and done all the time,” Giuliani suggested the action had been routine. “If someone said, I have information about your opponent, you would take that meeting.”

“If this is their case for collusion, good luck Mueller,” Giuliani said of Special Counsel Robert Mueller, who is leading a probe into Russian interference in the U.S. election. It is illegal for a U.S. political campaign to accept help from a foreign individual or government.

The rationale used by Trump and now by Giuliani contradicts a statement the president helped craft in 2017, which said the meeting with lawyer Natalia Veselnitskaya had been arranged to discuss U.S. policies for adopting Russian children.

Giuliani joined Trump’s legal team in April. The mid-2016 meeting was attended by Paul Manafort, then chairman of Trump’s presidential campaign; Trump’s son-in-law, Jared Kushner; and several Russians, including Veselnitskaya, and their representatives, as well as Donald Trump Jr.

The former New York mayor said the Trump team didn’t know Veselnitskaya was Russian before the meeting and didn’t think she represented the Russian government.

Giuliani also said on NBC and in a separate appearance on Fox’s “Sunday Morning Futures” that Trump has nothing to fear about what White House counsel Donald McGahn told Mueller. The New York Times reported this weekend that McGahn gave voluntary interviews totaling some 30 hours over nine months.

“We are confident that he said nothing wrong about the president,” Giuliani said on Fox, suggesting that McGahn would have resigned if he had. Giuliani also said on NBC that former Trump lawyer John Dowd has said McGahn was a strong witness for the president.

Trump’s legal team is still weighing up whether to allow the president to be interviewed by the special counsel. Giuliani said Mueller is “desperate”’ to find something to charge Trump with, and that “I’m not going to be rushed into having him testify so that he gets trapped into perjury.”

The former New York mayor also had an exchange with “Meet the Press” host Chuck Todd in which he said “truth isn’t truth” when it comes to two people telling different stories.

If Mueller tries to issue a subpoena to Trump before the midterm elections in November, the president’s team will accuse him of trying to interfere because he could have acted sooner, Giuliani said on NBC.

“Time for Mueller investigation to file report,” Giuliani said Saturday on Twitter. “We will release ours. Don’t interfere with election.” 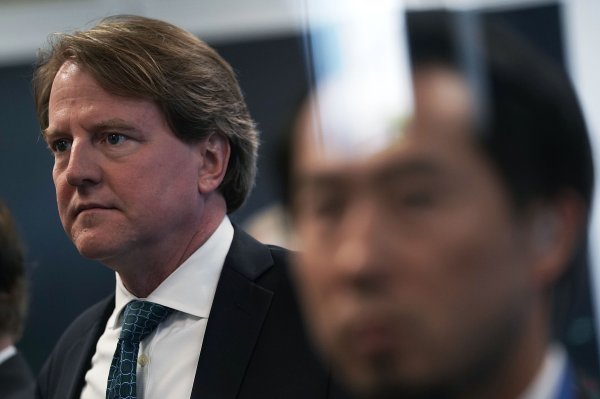