What Our Sex Sounds Say About Us

Aaron Tilley—Getty Images
Ideas
By Mara Altman
Altman is the author most recently of Gross Anatomy: Dispatches From the Front (and Back).

I was sure that moany sex meant better sex; to me, the women who used those sounds while they humped were the poster children of the sexually free. I suspected that they were having the coitus of champions, which meant, of course, that there was something I was missing out on.

As the years went on, I had other boyfriends, but my decibel level remained disappointingly similar. By the time I was with Dave, my sonic landscape was still most closely matched with a library. Even though we’ve discussed it and he said he doesn’t need me to be vocally porny, I can’t help wondering if he’s looking at me during sex and thinking, “Is this thing on mute?”

I wanted to take a closer look at what I might be missing out on. Are humans actually predisposed to being screamers, and if so, what is the purpose of all the noise?

Lorraine McCune has been studying the grunt at Rutgers University since 1987. She explained that the grunt is a physiological response to exertion, an epiphenomenon occurring when the body needs more oxygen.

What happens, more or less, is this: “Under conditions of metabolic demand, activation of the intercostal muscles to maintain lung inflation during expiration sets in motion reflex contraction of laryngeal muscles, creating a system under pressure that lengthens the expiration phase of the breath and enhances oxygenation of the blood. Expiration against the constricted glottis produces pulses of sound.”

Translation: In the right circumstances, the sound just happens.

McCune went on to explain that tennis players often grunt when they hit a ball off their racket and that trying to stop the sound can actually hurt their game. “When you squash the grunt,” she said, “you’re having to use energy that you could have used for your stroke to suppress a vocalization.”

There is even a study that proves McCune’s point. Researchers from the University of Nebraska Omaha found that professional players increase the ball’s velocity by 3.8% if they grunt while taking their shot.

When I read that, I got a little jealous — theoretically, during sex, the people who grunt enthusiastically can add force to their hump.

This led me to Barry Komisaruk, a neuroscientist and the author of The Science of Orgasm, a man I knew would have no problem waxing poetic about these mechanisms. “No question,” he said. “Sex sounds are a physiological response to exertion.”

To tell me how sex sounds evolved from a small grunt into the screaming spectacle we know them to be today, he began by telling me a story about seagulls. “When a seagull begins to take off, it flaps its wings,” he said. “Each time it flaps its wings, it makes a sound.” He paused for dramatic effect. “Ahh ahh ahh,” Komisaruk squawked, imitating the bird. “The vocalization is synchronized with the movement because the exertion creates sound.”

This is where it got interesting: What begins as a simple squawking sound soon evolves to mean much more, he explained. A member of the seagull’s flock that hears “ahh ahh ahh” will interpret it as a signal that his bird buddy is taking off.

“The sound serves as a type of communication, even though it wasn’t the original intention,” Komisaruk said.

The same goes for sex sounds, he explained. They may have begun as a series of small respiratory releases, but they have been adapted into a form of communication between partners. When a woman exhibits them, for example, they inform her partner about her level of pleasure and enjoyment.

“The sound is a representation of the intensity of excitation,” Komisaruk explained. “If a partner gets excited hearing a shout during sex, then that can be a rewarding communication that bonds the partners and encourages them to do it again.”

I’ve found that your lover can also be encouraged if you just take off your pants and awkwardly stare at him.

Meanwhile, I’d become intensely attuned to all the amorphous noises coming out of people’s mouths. I was focused. The moan, in particular, caught my attention. It was similar to a grunt yet didn’t require any prerequisite exertion.

Moans were in more places than just the bedroom. I was hearing them everywhere.

We moan when food is delicious, sometimes even before we take a bite. I myself got just about porny over a hamburger one night. We moan when we get a massage and the masseuse hits the perfect spot. We moan when we stretch our arms up, and we give a little “mmm” when a latte is just right. Why were we moaning like that?

I asked James Higham, an anthropology professor at New York University who specializes in communication, why we revert to amorphous moaning in these situations versus using the gift of articulate language, which we’ve developed almost miraculously over many millennia of painstaking evolution. In other words, why do pleasurable sensations make us go lexically Neanderthal?

The briefest and easiest form of communication, he explained, of course, is a sound.

“I don’t have to say, ‘Oh yeah, that’s the spot right there, no wait, just slightly up,’ ” he explained. “I can just be quiet until they hit the spot and go ‘mmm,’ and there you go — they know.”

The moan, then, was not only an exaggerated physiological reaction or an antiquated way to get attention, but also a shortcut — a way to be efficient. The moan, that little mush bucket of stretched-out vowels, started to seem even mightier than I’d given it credit for.

Another way to understand the significance of the sex sound was to investigate why women faked. I had never thought about it this way before, but women wouldn’t go through all the trouble to put on such a performance if these sounds didn’t wield significant power and influence.

Gayle Brewer, a professor of psychology at the University of Central Lancashire, coauthored a study about fake sex sounds. In the unimaginative yet fittingly titled study “Evidence to Suggest That Copulatory Vocalizations in Women Are Not a Reflexive Consequence of Orgasm,” Brewer found that all her 71 respondents faked some of the time, while 80% of the women faked 50% of the time.

“They were doing it quite a lot,” she said.

She found that women tend to fake for two different reasons.

One was that they wanted the sex to end. Brewer explained the method tends to work, too. Because sex sounds give a signal to a woman’s partner that she’s had her orgasm, he feels like he can go ahead and let ’er rip.

The other is that they want to give an ego boost to their partner.

I wish I’d read this study earlier in my life. I’ve always gone with the theory that giving your lover the silent poker face makes him work harder.

The researchers posit that by boosting the man’s self-esteem, he’ll be more likely to come back for seconds. Seconds might turn into thirds. The more sex, the more chances to aid in the continuation of our species.

Ultimately, I felt mixed about all this news. In one sense, it made lady sex noises seem inauthentic. In another, it made them brilliantly strategic — like over the millennia women have expertly harnessed their vocal chords and turned them into a type of superpower. Using fake sex sounds should come with a cape and a leotard. With her voice, a woman can make a guy fall in love and/or ejaculate on command.

But no matter what we call the sounds, the message from Brewer’s study is clear: A lot of moaning occurs when there isn’t much to moan about after all.

The only question I had left, and maybe most important to me of all, was whether or not I was actually missing out on something by not being vocal. Did sound do more than just communicate and in fact actually enhance the sex experience?

I’d always felt that I should make sounds only if they were so powerful that they could not otherwise be stopped — that’s the only way I felt that my sex sounds would be authentic. The physical sensations, in my mind, had to lead to the audible.

Over the next few days, I digested all this information, and some surprising emotions emerged. Even though being loud had obvious advantages and was something that I’d aspired to since a young age, I began to feel righteous about my place in the vocal continuum. I felt like one of the little guys who must stand up stoically for a different way of life. I even thought about starting a silent-sex chat room in order to give support to other silent sexers all over the world. We could band together and petition for our kind to be represented in Hollywood films.

But then one evening my curiosity got the better of me — I decided to do it like a baboon.

I’d warned Dave that things might be different, but he wasn’t prepared for what happened that night. He laughed a lot. I laughed, too. It was uncomfortable. I sounded a bit like Pee-wee Herman trying to use a toothpick to till a large garden. No one told me that it might take a while to find my sex voice, but as with most art forms, I think that it’s true.

I’d spoken to sex therapist Nan Wise, and I’d asked her why a woman might not make a lot of sound. First, she theorized that this woman might be repressed, but then she said something else I found quite insightful. “Maybe she wants to concentrate on her own sensations,” she’d said. “It can be a way to be focused on the inside, on what’s going on for you.”

I liked that reason and it resonated.

When people go blind, their other senses often pick up the slack, leaving them, for example, with super ultrasonic bat levels of hearing. Maybe if you aren’t busy hollering during sex, you have the space in your brain to develop advanced sensory sensitivity in your vagina.

I’m not saying I’m not a little repressed as well. I’m obviously a little repressed. I also refuse to do karaoke or let loose on a dance floor without giving myself alcohol poisoning first. I guess what I’m saying is that I’ll keep experimenting with sound — I will — but at my core, I’m a silent sexer for life. 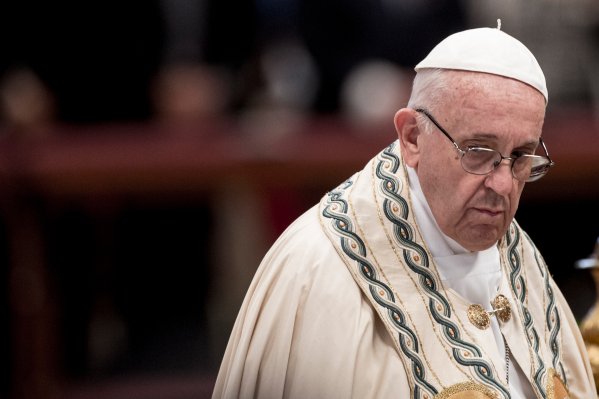 Why It Is Time for All U.S. Bishops to Resign
Next Up: Editor's Pick