China May Be Adding a ‘Nuclear Element’ to the South China Sea, the Pentagon Warns

DigitalGlobe imagery of the Subi Reef in the South China Sea, a part of the Spratly Islands group, Sept. 1, 2015.
DigitalGlobe/ScapeWare3d—DigitalGlobe/Getty Images
By David Tweed / Bloomberg

The Pentagon sounded a warning over China’s plans to introduce floating nuclear power plants on disputed islands and reefs in the South China Sea, part of annual report assessing the nation’s military strength.

“China’s plans to power these islands may add a nuclear element to the territorial dispute,” the Pentagon said in its 2018 report to Congress titled “Military and Security Developments Involving the People’s Republic of China.” “China indicated development plans may be underway to power islands and reefs in the typhoon-prone South China Sea with floating nuclear power stations; development reportedly is to begin prior to 2020.”

China Securities Journal — a Chinese state-run financial newspaper — said in 2016 that China could build up to 20 floating nuclear plants to “speed up the commercial development” of the South China Sea, according to a report in the South China Morning Post. Several Chinese state-run companies last year established a joint venture that aims to strengthen China’s nuclear power capabilities in line with its ambitions to “become a strong maritime power,” the Post added, citing a statement released by the venture.

Beijing claims more than 80 percent of the South China Sea, which carries around $3.4 trillion worth of global trade each year. Five other countries — including the Philippines and Vietnam — also have claims in the waters, which have led to clashes over fishing rights and energy exploration.

U.S.-China military ties have deteriorated of late, with the Trump administration in May revoking an invitation for Beijing to join in Pacific naval exercises due to its activities in disputed parts of the sea. China has reclaimed 3,200 of acres of land in the Spratly Island chain and militarized them with ports, runways and other military infrastructure.

“The best-case scenario for the region would be China reconsidering the electricity supply source for its controlled islands, or at least a delay in the deployment of the fleet,” given potential safety challenges and security risks from pirates or regional terror groups, Viet Phuong Nguyen, a nuclear researcher at the Korea Advanced Institute of Science and Technology, wrote in The Diplomat that month. 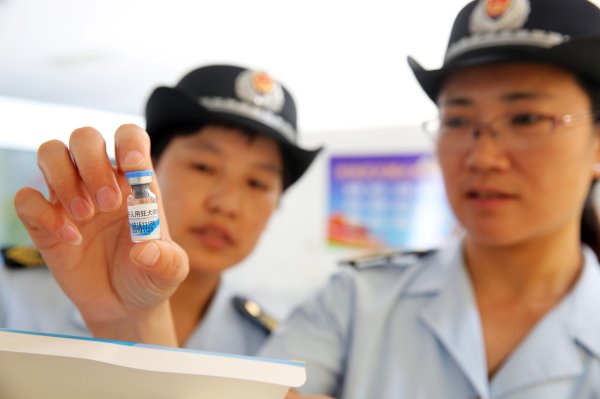 China Takes Action Against 40 Officials in Vaccine Scandal
Next Up: Editor's Pick