Turkey's Economy May Be in Freefall, But Erdogan's Base Believes He Can Do No Wrong

President Recep Tayyip Erdogan's supporters celebrate outside the AK party headquarters on June 24, 2018 in Istanbul, Turkey
Jeff J Mitchell—Getty Images
Ideas
By Soner Cagaptay
Cagaptay is a senior fellow at The Washington Institute for Near East Policy and author of The New Sultan: Erdogan and the Crisis of Modern Turkey.

Turkish economy faces severe economic troubles as Ankara readies for what could be a drawn-out fight with its ally the U.S. over the arrest of Pastor Andrew Brunson in Turkey. However, do not expect the base of Turkish President Recep Tayyip Erdogan to abandon him. No matter the troubles facing Turkey, Erdogan’s followers believe they have a historic mission to stand by the man they adoringly refer to as the Reis (meaning Leader or Captain in Turkish).

To these supporters, Erdogan is under attack by external enemies like the U.S. because he’s out to make Turkey great and Muslims proud again. These foreign adversaries want Erdogan to fail because they do not want to see Turkey nor the Muslims rise.

That belief is bolstered by Turkey’s media, which is almost entirely controlled by Erdogan, and pro-regime pundits who propagate a grand historical narrative where Erdogan is the principle protagonist. Call it “Erdoganism.”

This narrative blends post-colonialist theory and anti-Westernism under the persona of Erdogan, centered on the axiom that he embodies the Turkish people’s will. It is rooted in the fall of the Ottoman Empire at the end of World War One, following which Mustafa Kemal Ataturk established Turkey as a modern republic. A romanticized notion of this collapse continues to shape Turkey’s view of its place in the world. Nations that were once great empires often have a malleable, exaggerated sense of their glory days, and a readiness to be inspired and mobilized by exploitative politicians.

Enter Erdogan. Take for instance, an Erdoganist pundit’s views on Turkey’s transition from the Ottoman Empire to a republic after World War I, when Ataturk shifted to a pro-Western stance: “If your state has been overthrown and the new government has befriended those that destroyed your old government, then the creators of the new state are traitors, and your country is a colony.”

In fact, Ataturk embraced Westernization, taking steps to make Turkey unconditionally European so that it could finally fulfil its quest to become a major power again. Ataturk Europeanized Turkey because European states were the great powers of the world in the interwar era when he was Turkey’s president. If Brazil and Argentina had been great powers at the time, he might have followed a Latin American model of reform and modernization.

But Erdoganism, which feeds on the politics of resentment, rejects Ataturk’s pro-Western legacy in its entirety. According to Erdoganists, Ataturk’s cohort of secular republican founders struck a deal with the Allies after WWI to subjugate Turkey under Western interests as a “subaltern,” in the words of Italian philosopher Antonio Gramsci.

This tradition of subjugating the people’s will to the West supposedly continued under various secular parties that governed Turkey until Erdogan’s Justice and Development Party (AKP) came to power in 2002.

Those Muslims who believe they are caught up in the historic struggle of the Cross against the Crescent require a leader for victory. After the July 2016 coup attempt, Erdogan has proven himself to be that leader.

This is why the West, which they see as pitted in a civilizational struggle against Islam, sees Erdogan as a threat. As pro-Erdogan Turkish daily Yeni Safak announced: “The West has declared a…war against Turkey, which it sees as a global threat …[and] is openly supporting terrorist organizations.”

Erdogan’s recent election victory on June 24th, in which he received 52 percent of the vote, was the final stage in his transformation into the Reis. This date constituted an unmistakable break in Turkish history—one in which Erdoganism came to dominate the political landscape. The Turks who voted for him on Jun. 24 see Erdogan as their savior who will protect Turkey and make Muslims proud again.

As Turkey faces a potential collapse of its economy, do not expect Erdogan’s base to change their mind so quickly regarding the Reis. 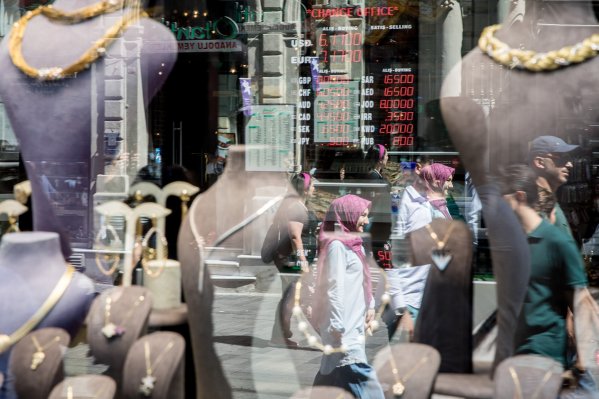 Turkey’s Erdogan Is in a No-Win Situation With Washington
Next Up: Editor's Pick