The U.S. and Turkey remained locked in a stalemate that has jolted global markets, as the White House said new tariffs on Turkish goods would remain and President Recep Tayyip Erdogan received a financial lifeline from Qatar that should buy him time in the standoff.

The Trump administration said Wednesday that Erdogan’s imposition of retaliatory tariffs against the U.S. were “a step in the wrong direction.” In a sign the conflict is far from over, White House spokeswoman Sarah Sanders said U.S. tariffs announced last week will stay in place regardless of whether an American pastor detained in Turkey is freed.

As Erdogan sought to cushion the impact of the crisis on Turkey’s economy, he reached out to German Chancellor Angela Merkel for possible assistance and won a promise from Qatar’s emir to invest $15 billion.

The plight of the American pastor, Andrew Brunson, has dominated the Trump administration’s strategy toward its NATO ally, even as the dispute roiled currency markets. Brunson, who Turkish officials say had links to a failed 2016 coup, is being held under house arrest. A lower court earlier on Wednesday turned down his lawyer’s request to free him, and the U.S. — which rejects Turkey’s accusations — has said it won’t negotiate until he’s released.

“The tariffs that are in place on steel won’t be removed with the release of Pastor Brunson,” Sanders said, because they were imposed on “national security” grounds.

As the dispute festers, Turkey announced on Wednesday a string of new tariffs ranging from 50 percent to 140 percent on rice, alcohol and cars from the U.S. in retaliation for President Donald Trump’s move to double tariffs on Turkish steel and aluminum imports last week. The punitive steps come after Erdogan called on Turks to boycott American electronics, such as Apple Inc.’s iPhone, which have in any case become more expensive as the lira lost almost 40 percent of its value this year.

Nevertheless, Erdogan won a reprieve on Wednesday after Qatar’s emir promised to invest $15 billion in the country. That followed a string of urgent steps Erdogan has taken to protect Turkey’s economy, which was already under strain before the latest U.S. tariffs and sanctions were announced.

Yet the Qatari announcement won’t solve Erdogan’s fundamental economic problems. The currency meltdown this month has already made it much more costly for businesses to refinance at least $16 billion in bonds denominated in foreign currencies that are due by year-end, according to calculations by Bloomberg.

In total, companies in Turkey have $217 billion in net foreign-exchange debt, equal to about a quarter of gross domestic product, according to central bank data. While officially the bad debt ratio at Turkey’s banks is just 3 percent, lenders are in the process of renegotiating upwards of $20 billion of loans to try to prevent them from going into default.

The International Monetary Fund urged Turkey to adopt sound economic policies to promote stability and reduce imbalances at a time of market volatility, Reuters reported, citing comments Wednesday by an unidentified spokesperson for the agency. The spokesperson said that Turkish authorities had so far given no indication that they intended to seek IMF assistance, according to the report.

Erdogan also moved to strengthen ties with Germany, Turkey’s biggest economic partner by far, accounting for about 37 billion euros ($42 billion) in bilateral trade last year. Relations between the two countries had deteriorated as Erdogan consolidated power after the failed coup, prompting disputes that led Germany to withdraw troops from Turkey and a long-running diplomatic standoff over a jailed German journalist.

Nevertheless, Germany wants Turkey to avoid a financial meltdown and can’t allow the country to descend into chaos, according to a person familiar with Merkel’s thinking who asked not to be identified discussing government deliberations. In an overture that signals normalizing relations after a series of diplomatic clashes, Germany plans to host Erdogan for a state visit on Sept. 28.

“No one has an interest in the economic destabilization of Turkey,” Merkel said in Berlin this week.

But support from Qatar and Germany can’t fix Erdogan’s problems, and the U.S. has signaled it’s unfazed by Erdogan’s retaliations.

“Any help that Germany could give right now would be small compared to the problems at hand,” Holger Schmieding, chief economist at Berenberg Bank, said by phone.

While Erdogan can buy time, it’s not clear how the standoff with the U.S. can be resolved so long as Turkey continues to detain the pastor. The U.S. president believes Erdogan reneged on an earlier deal to free Brunson, while Erdogan has his own set of grievances — including a demand that the U.S. extradite a former ally he blames for the failed coup — that predate the latest crisis. 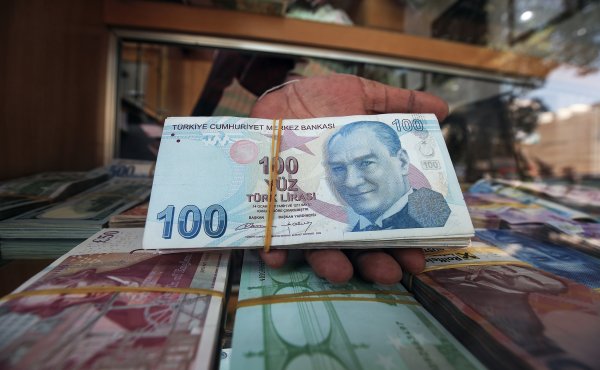