Facebook Is Failing to Control Hate Speech Against the Rohingya in Myanmar, Report Finds

A Rohingya girl arrives in Bangladesh with other refugees who fled from Myanmar on Sept. 6, 2017.
K M Asad—AFP/Getty Images
By Laignee Barron

Despite pledging to tackle the issue, Facebook is failing to stem the tide of anti-Rohingya hate speech posted in Myanmar, where the social media giant is blamed for inciting ethnic violence. According to a Reuters investigation, more than 1,000 incendiary posts calling for Rohingya murders and even genocide were still live on the site as of last week, while a secretive operation to combat the scourge has yet to make much of a dent.

Facebook has acknowledged that it needs to do more to curb misinformation and hate speech spreading in countries like Myanmar, and CEO Mark Zuckerberg told U.S. Senators in a hearing last April that the company is ramping up its efforts.

However, Reuters found the network is still being used to spread comments, videos and images attacking Rohingya and other Muslims in Myanmar. Some of the material, collected by Reuters and the Human Rights Center at UC Berkeley School of Law, has been online for at least six years.

The posts, most of which are in Burmese, use dehumanizing language, comparing Rohingya to dogs and maggots, and call for the Muslim minority to be eradicated.

“We must fight them the way Hitler did the Jews, damn kalars!” one person wrote, using a pejorative term.

Facebook’s rules prohibit “violent or dehumanizing” speech. But the network, which in Myanmar is synonymous with the internet itself, mainly relies on users to flag offending content rather than proactively rooting out the posts itself.

This approach, as well as the limited resources the company has expended on countering hate speech in a Myanmar, has generated harsh criticism from the U.N., as well as from U.S. and U.K politicians.

In March, U.N. investigators said that disinformation campaigns hosted by Facebook played a “determining role” in provoking the latest episode of violence against the Rohingya in Myanmar. The military-backed crackdown saw more than 700,000 Rohingya flee to neighboring Bangladesh since October in attacks widely condemned as ethnic cleansing.

In a statement posted on Wednesday, Facebook admitted it has been “too slow” in addressing hate speech in Myanmar. “We’re now working hard to ensure we’re doing all we can to prevent the spread of misinformation and hate,” it said.

Reuters reported that Facebook has outsourced most of its monitoring in Myanmar to a firm called Accenture in a operation dubbed “Project Honey Badger.” Former monitors told Reuters they did not search for offending material themselves, but reviewed a giant backlog of flagged posts. Facebook does not have a single employee in Myanmar, where its active user base has grown to 18 million, according to Reuters. 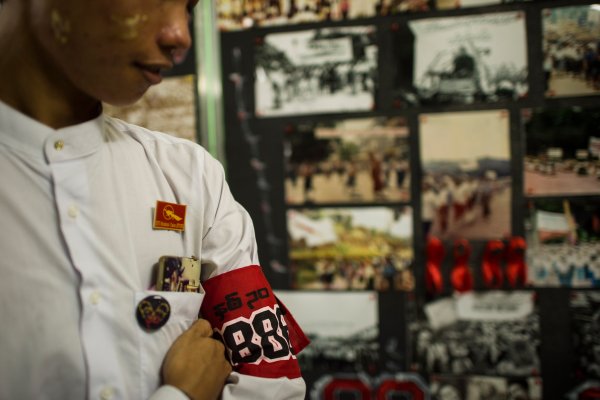 How a Failed Democracy Uprising Set the Stage for Myanmar's Future
Next Up: Editor's Pick